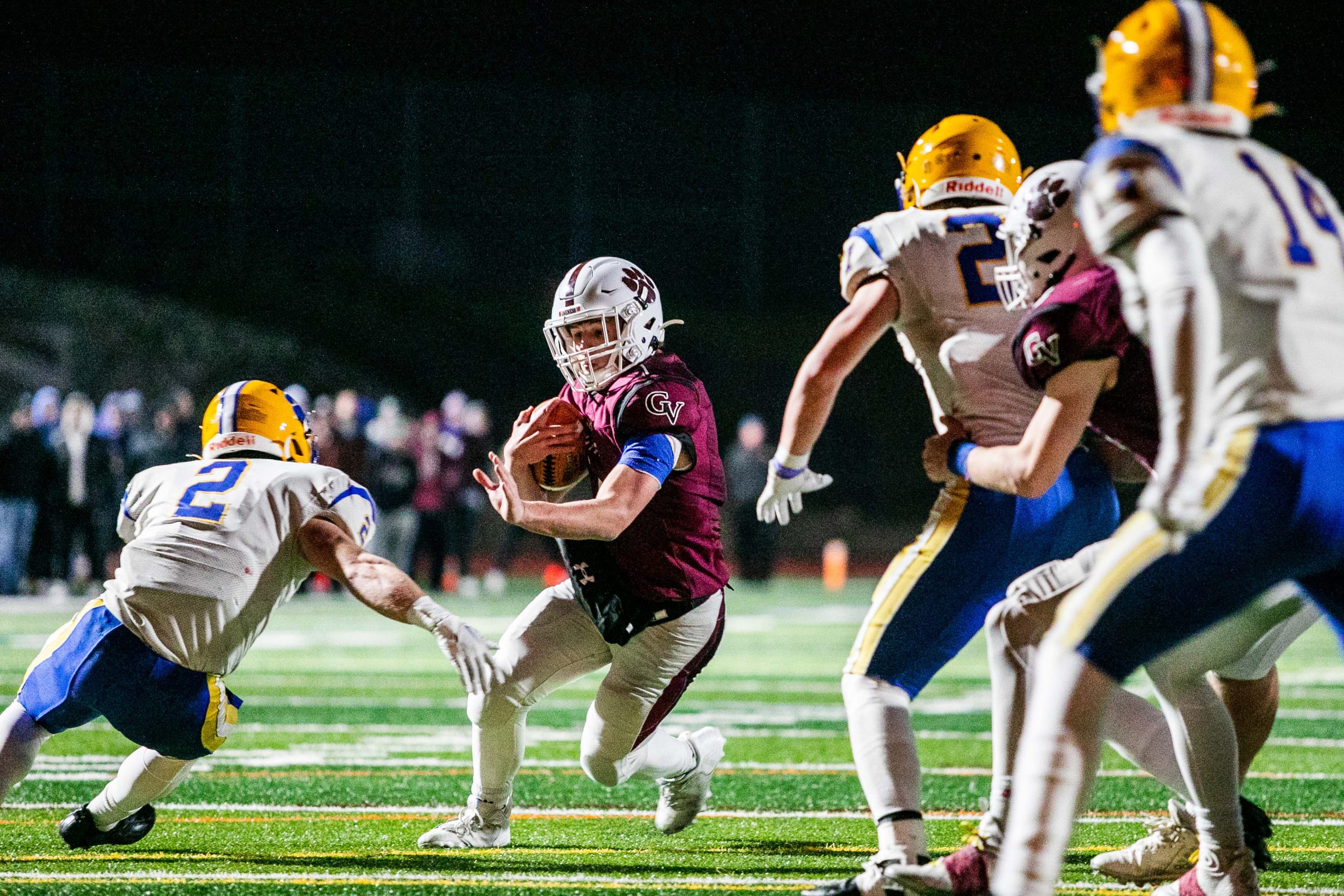 Garnet Valley's Matt Mesaros dashes up the middle on a carry against Downingtown East in last week's District 1 Class 6A semifinal. (NATE HECKENBERGER - FOR MEDIANEWS GROUP)

Bryson Hall’s No. 88 jersey was draped over one of the benches on the Garnet Valley sideline during the District 1 Class 6A semifinal last Friday.

It was the Jaguars’ simple yet thoughtful way of remembering a beloved teammate. Hall, a senior wide receiver/defensive back, died Nov. 13. He was 17.

It was a difficult five days leading up to the their game with Downingtown East. The Jags won convincingly, 28-17, to advance to the District 1 championship game for the second year in a row. The GV players and coaches pulled together and won one for Hall.

“It was tough. We all love Bryson so much,” senior quarterback Matt Mesaros said. “We played together, that was our word. We went out and played for him.”

“It really defines Garnet Valley ‘oneness’ and how we are a family,” senior running back/linebacker Joe Checchio said. “Everybody was there for each other, everyone stood together. I just love this team so much.”

First-year head coach Eric Van Wyk said that he was never more proud to be a coach.

“The safe haven was practice,” he said. “They got the opportunity for a few hours a day to just focus on football. And outside of that, they stuck together every day in school. They are a resilient group.”

The top-seeded Jaguars (12-0) host the No. 11 Central Bucks Bucks (8-4) for district championship. The teams kicked off the 2022 campaign against each other, in Van Wyk’s coaching debut, a 14-7 victory. GV also defeated CB West, 41-13, in a district tournament game last fall.

The Jags enter with a 22-game home winning streak. They haven’t lost a game on home turf since a 48-27 setback to Coatesville in the district semifinals on Nov. 15, 2019.

The Bucks rallied in the second half last week to upend No. 2 Perkiomen Valley, 14-13. They limited the Vikings to 43 yards of total offense in the second half. Ganz Cooper’s quarterback sneak from a yard out tied the game, and Ryan Clemens’ extra point gave the Bucks the lead in the third quarter. CB West, which overcame a 1-3 start to the season, is playing for a District 1 title for the first time in 22 years.

Jason Bernard paced the Jags with 145 yards on 15 carries in the 28-17 win over Downingtown East. Checchio, Jack Westburg and Luke Mingioni are threats on the ground as well. Mesaros added 74 yards rushing and was 7 of 10 with 92 yards through the air. The dual threat has passed for 1,190 yards and 17 touchdowns.

The winner advances to the PIAA Class 6A semifinal round to play either District 12 champion St. Joseph’s Prep or District 11 champion Parkland.

Last Saturday, the Friars won the battle of Delco’s Class 4A district championship squads to advance to the PIAA quarterfinals.

Led by running backs Avery Hankey and Isaiah Session, who combined for 217 yards and four TDs, Bonner claimed its program record-tying 11th win with a 33-21 decision over Interboro. The Friars, who twice trailed by 14 points in the second quarter, scored 26 unanswered.

Last week marked only the third time this season the Friars allowed 21 points in a game. After a 14-12 loss to Haverford School, which would go on to an undefeated campaign, in Week 2, Bonner has compiled 10 straight wins. Jack Muldoon was recently named coach of the year by the Philadelphia Catholic League.

The Crestwood Comets (12-1) won the District 2 championship with a 13-7 decision over Valley View. Senior running back Noah Schultz, who has rushed for more than 2,000 yards, went for 183 yards and two TDs in the district final.

The winner takes on the District 3 champion in the state semifinals.