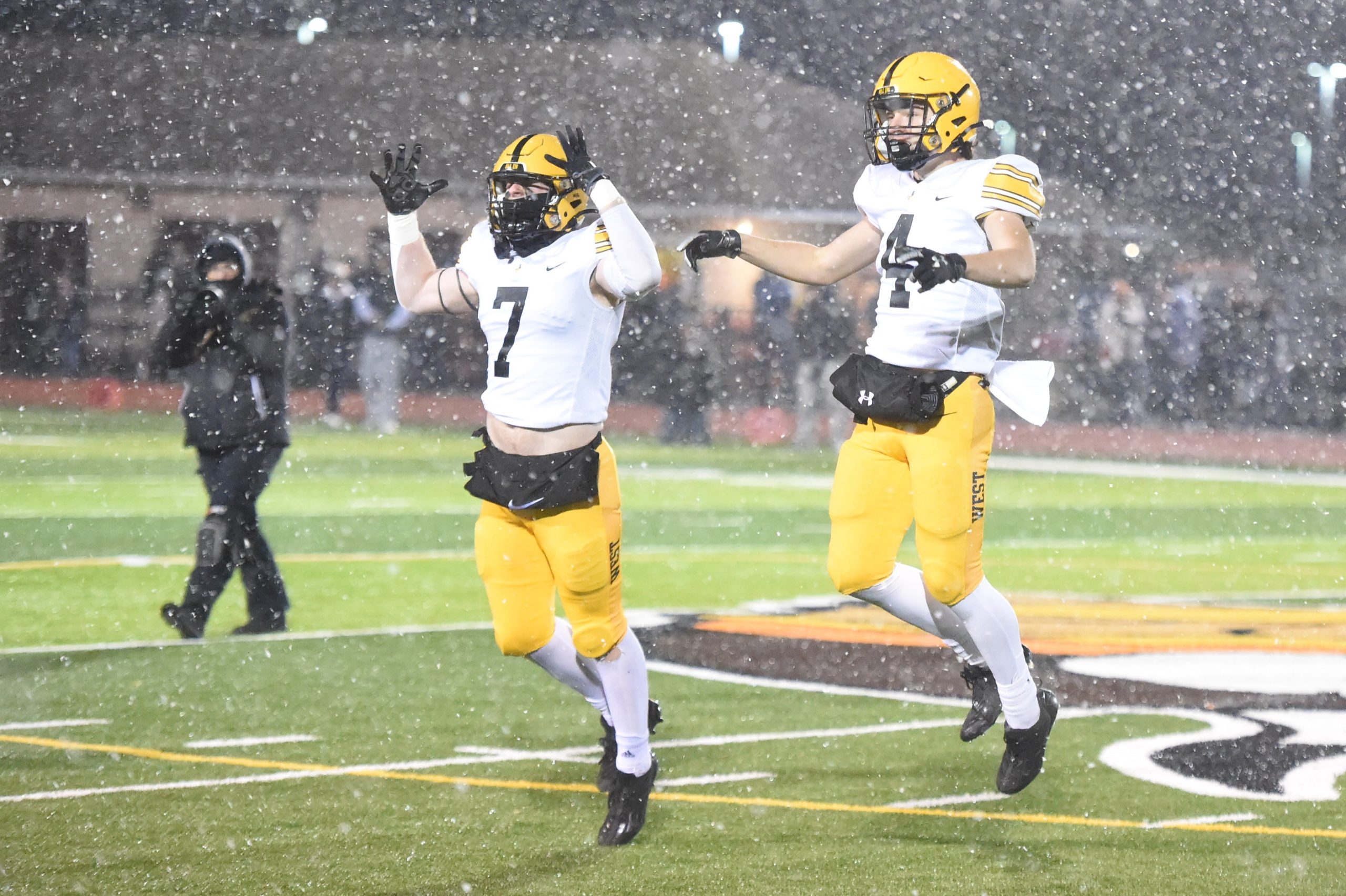 Central Bucks West's Jack Williams (7) and Eli Boehm (4) get hyped up before the Bucks' District 1-6A semifinal against Perkiomen Valley on Friday, No. 18, 2022. (Mike Cabrey/MediaNews Group)

Bucks coach Rob Rowan’s message at the break was a simple one – we have been through this before.

“My exact words were to them at halftime ‘This is where we were seven days ago, right?’ said Rowan after the contest. “’ So take a deep breath, let’s get out, let’s get a stop, all right let’s get the ball, let’s execute and let’s go play football.’”

A week prior in a game completely different in style, CB West trailed North Penn 32-28 at halftime and proceeded to hold the Knights to just three points from there, topping their Suburban One League National Conference rival for the second time in 2022 in a 44-35 quarterfinal victory at War Memorial Field.

The semifinal with Perk Valley on a cold night at Thomas J. Meehan Stadium – which featured snowfall during the game’s early portion – became a defensive battle, one CB West acclimated to as well as the offensive shootout they were involved in a round prior.

The Bucks kept the Vikings off the scoreboard after intermission, allowing PV a total of 129 offensive yards – 89 passing, 40 rushing – with Ganz Cooper’s one-yard TD on a quarterback sneak and Ryan Clemens’ extra point putting West past Perk Valley 14-13.

“You can’t really beat it, you got to be prepared for both of ‘em, either way,” CB West quarterback/safety Ganz Cooper said. “Two great defenses. That’s probably one of the best defenses we’ve played all season so props to them they’re a great team but I mean we’re going to enjoy this one.”

The Bucks’ path through the District 1 tournament has had plenty of variety but so far, the result has been three West victories, putting the 11th seed in its first district title game since 2000.

“I haven’t thought much about that and I’m just going to be honest with ‘ya, we get so laser-focused on just preparing our guys to win a football game,” said  I’m proud of this team and what it means to the community and what they get to experience with the community backing them so strongly.”

West faces top seed and defending district champion Garnet Valley 7 p.m. Friday at the Jaguars’ Moe DeFrank Stadium. It is the Bucks’ second trip to GV this season – the teams meeting Week 1 with a touchdown in the fourth quarter’s final seconds giving Garnet Valley a 14-7 win.

After its season-opening loss, CB West fell to Upper Dublin – which is in the District 1-5A final – 35-7 before getting its first win of 2022, cruising past Quakertown 56-14. But a 26-21 loss to Pennsbury in its conference opener had West sitting 1-3 after four weeks.

West, however, began the turn around its season a week later, Eli Boehm running for 223 yards and three touchdowns in a 35-14 win at North Penn. Shutout victories over Abington and Neshaminy followed while a 27-8 win over Pennridge had West at 5-3.

A 27-14 defeat against Central Bucks South snapped the four-game win streak but the Bucks have not lost since.

“I just think they believe in each other whole-heartedly and they love each other, they care about each other and they never quit on each other. And I think that’s special.”

West topped Central Bucks East 21-14 in its regular-season and a week later headed back to East for the first round of the district playoffs. The Bucks scored 21 points in the second quarter to build a 28-0 halftime lead then held off the Patriots 42-26 win.

Boehm ran for 127 yards and two scores and caught a TD pass from Cooper, who threw for 112 yards and added a TD run.

The Bucks kept the offense going in their quarterfinal matchup with North Penn, which was definitely needed as the two teams traded touchdowns throughout the first half.

The Knights amassed 224 of its 410 total yards of offense on the ground but West answered with 522 total offensive yards – most of that coming Boehm stellar rushing performance of 335 yards and three TDs on 27 carries.

West and the Knights combined for 41 points in the second quarter which saw three long TDs on three consecutive snaps – Cooper’s 81-yard pass to Conor McFadden, North Penn’s Michai Cuffie’s 65-yard run then Boehm’s 80-yard run that made it 28-25 Bucks.

A Ryan Zeltt 52-yard pass to Luke Cody put North Penn up 32-28 at halftime, but after that the Bucks defense only gave up a Ryan Bocklet 25-yard field goal in the third that tied the game at 35.

Clemens’ 25-yard field goal with 8:26 in the fourth put West up 38-35 and after the Bucks recovered the ball on the ensuing kickoff, Cooper’s one-yard TD had West lead at 44-35.

After racing out to a big lead then holding off East then outlasting North Penn in a shootout, Central Bucks West found itself in a defensive matchup in the semis.

The Bucks’ defense provided the games’ first point on Jack Williams’ 27-yard interception return for a TD in the second quarter.

Perk Valley pulled even one play after an interception while a short punt set the Vikings up for their second touchdown – a Pat MacDonald 30-yard pass to Andrew Keough on 4th and 18 with 14 seconds left in the first half that put the host No. 2 seed up 14-13.

But the West defense held firm from there, allowing the Bucks to take a one-point lead in the third and maintaining the edge from there. A fumble recovery on a punt return late in the fourth helped secure the 14-13 win.

PV held Boehm to 54 yards on 18 carries but Vinnie Cherubini paced West with 86 yards on 15 carries while McFadden caught five passes for 116 yards.