Football: With two-point stop, Rustin gets revenge on Strath Haven 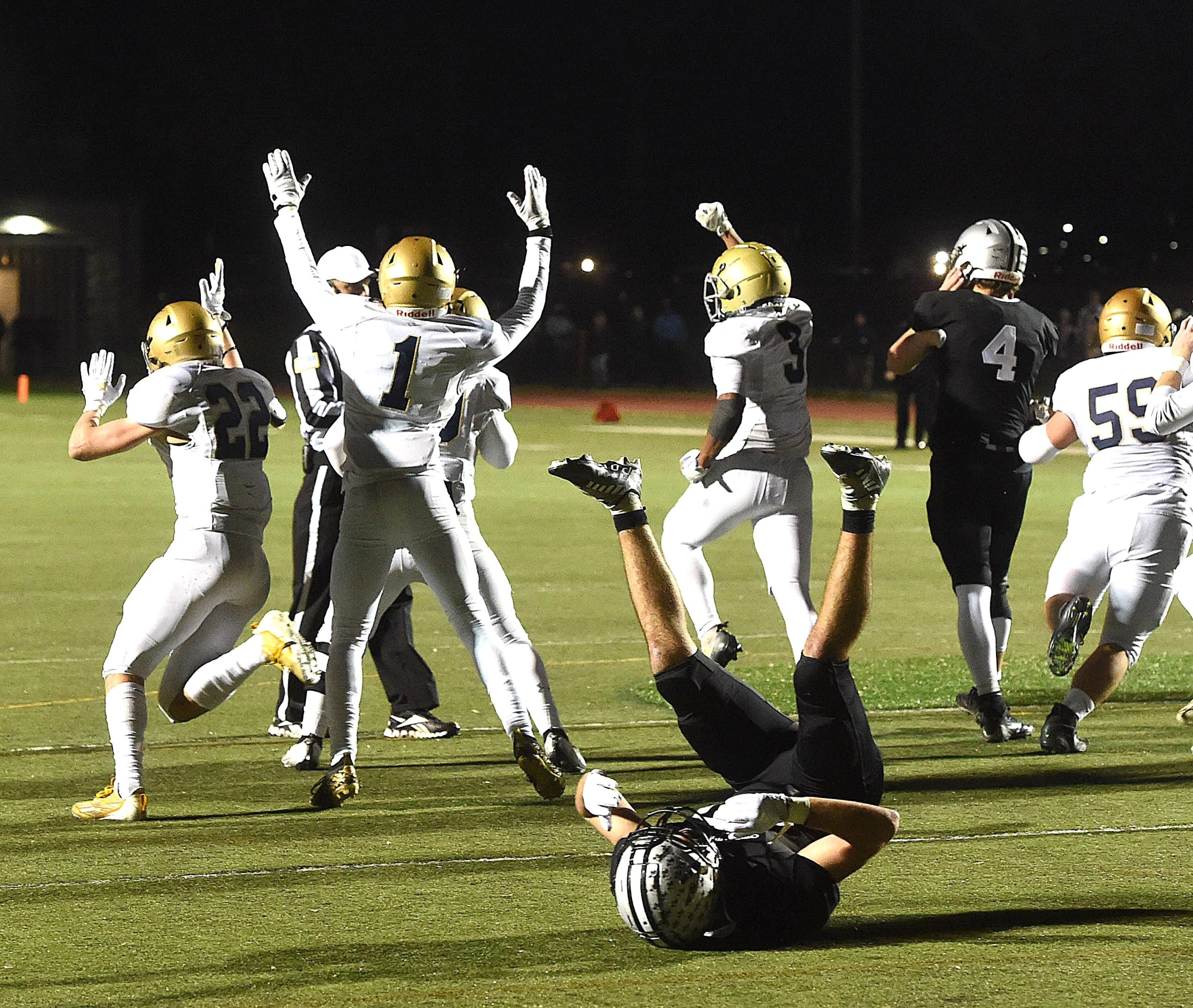 NETHER PROVIDENCE — Sam Milligan knew exactly what he wanted to do as soon as Anthony Crawford scored in overtime to get Strath Haven within a point of West Chester Rustin in the semifinals of the District 1 Class 5A playoffs at King Field.

The Panther quarterback turned to the bench and held up two fingers on his right hand.

“We know what happened last year,” Milligan sand. “And we knew what our offense was capable of doing.”

Strath Haven coach Kevin Clancy’s first reaction was to kick. But seeing his team’s reaction, he changed his mind.

“You have to go with the momentum,” Clancy said. “The kids wanted in.”

The decision was the same as last year’s district final, when Milligan went around right end on a two-pointer to give the Panthers a victory in double overtime.

The result wouldn’t be, a mishandled snap on a designed sweep left for Bob Fooskas dooming the play and sending Rustin on to this year’s final with a 28-27 victory in OT.

“I just didn’t get it,” Milligan said.

The victory for third-seeded Rustin avenged a 34-33 setback to the Panthers, this year’s No. 2 seed, a round later in last year’s playoffs.

The Panthers would not have been in a position to win the game had it not been for Milligan. He blocked two kicks — an extra point attempt after Nelson Murray returned the opening kickoff 92 yards and a 40-yard field goal try by Griffi Strunk with 2:11 left in regulation and the game tied at 21.

“We worked on it in practice and we couldn’t block anything,” Milligan said. “They let us take free runs and nobody blocked it. Tonight, the coaches lined us up, and I was able to get in there.”

Early on, it looked as though the Golden Knights (11-1) were going to run away with their revenge. After Murray took the opening kickoff to the house, Chase Hatton raced 30 yards to cap a seven-play, 69-yard march that gave Rustin a 13-0 lead.

Strath Haven, though, dug deep, mainly behind the running of Crawford. He ran for 197 yards and two scores to become the first back in program history to rush for 2,000 yards in a season. He finished with 2,093 yards and 28 rushing touchdowns.

“They got a real tough team,” Crawford said. “They got us back for last year. I hope they keep rolling, but we put up a heck of an effort.”

Crawford scored on a one-yard run to get the Panthers on the board and had a chance to put Strath Haven ahead on its next possession but was stripped of the football at the Rustin two-yard line.

The Panthers took the lead right before halftime when Fooskas scored on a one-yard run with six seconds left in the first half to give Strath Haven a 14-13 lead.

Daimon Jacobs put Rustin back on top, 21-14 with an 11-yard TD run and a two-point conversion catch from quarterback David McClain with 8:57 left in regulation. Austin Conner raced 58 yards on Strath Haven’s next possession to tie it and send the game into overtime.

Strath Haven deferred possession. Hatton scored on a 1-yard run and Labus added the point after to put the Golden Knights up, 28-21.

Crawford scored from a yard out. The decision to go for two was clear.

“It’s always my call,” Clancy said. “If you make a good play and you score, you win. If you don’t, you lose. Give them credit. They played a heck of a football game and made the big play at the end of the game.”

Despite the way it ended, Milligan had no regrets, not on the final play or the journey to get there.

“Last year was fun, and this year was bleeping awesome,” Milligan said. “It was the greatest worst experience of my life.”