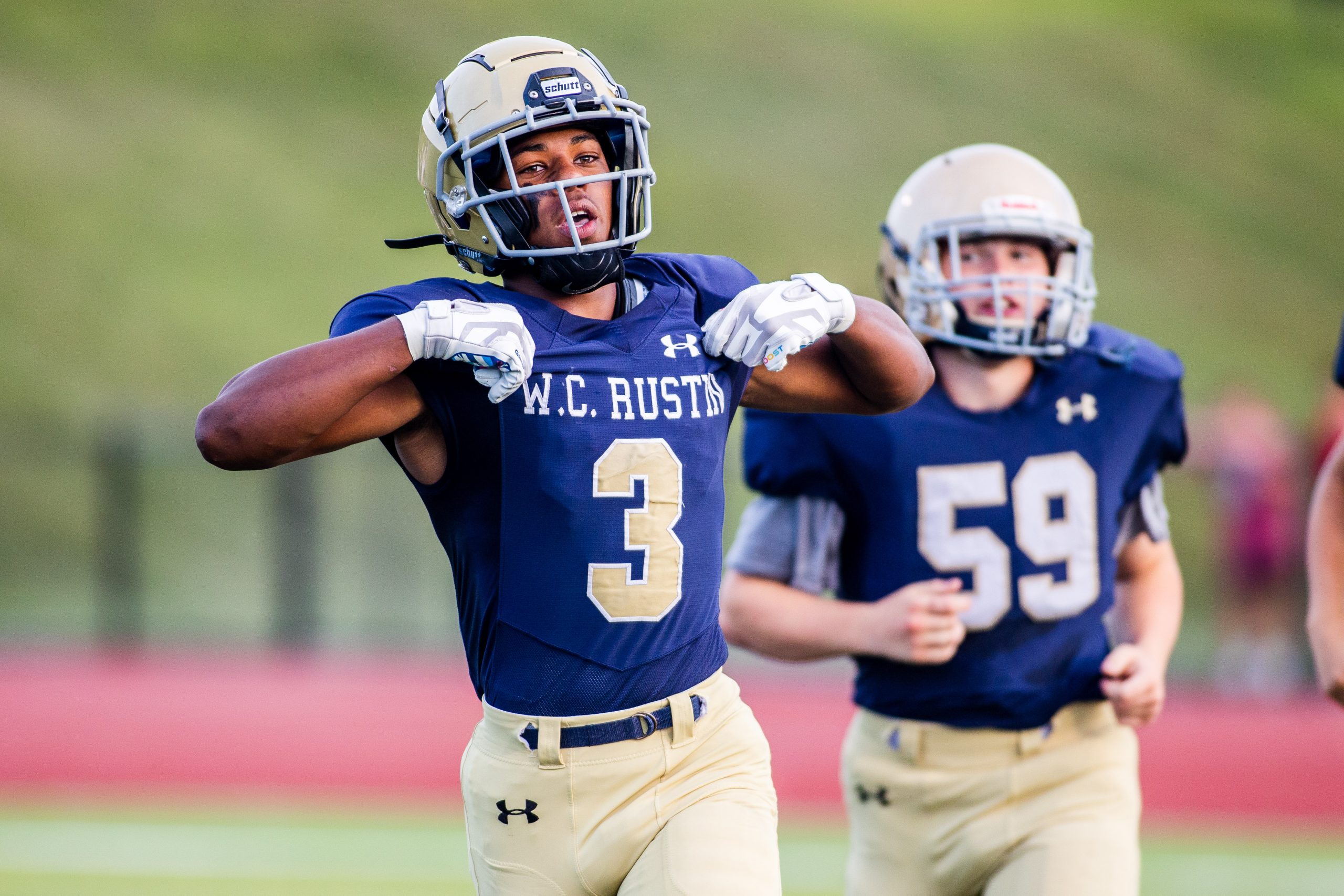 WESTTOWN >> The comparisons will be inevitable.

After what Dayshawn Jacobs did in a West Chester Rustin uniform the previous two seasons, anything younger brother, Daimon Jacobs, does will naturally be compared.

Fortunately for Daimon, and the Golden Knights, the younger brother is pretty darn good, too. Friday, in the season-opener against West Chester Henderson, Daimon did his brother proud, taking a kick return back for a touchdown on the first play of the season, the same way Dayshawn did in 2020.

Daimon also scored twice in his newly-expanded role as running back, and added an interception from his safety position to lead Rustin to a 47-0 win in the Ches-Mont League, American Division showdown.

“It’s amazing,” Daimon said. “I’m following in (Dayshawn’s) footsteps, but I’m also making my own path. I’m not in his shadow anymore and I’m showing I can do everything he does with his legs.”

The crosstown clash was also Bob Brice’s first game as head coach at Henderson (0-1). Brice was offensive coordinator for Rustin, under Mike St. Clair, who was also on the West Chester East staff when Brice quarterbacked the Vikings in the mid-2000s.

Despite the history, it was just business as usual for the new Warriors leader.

“We prepare for every opponent the same way,” Brice said of the matchup. “Rustin is a good football team, so it doesn’t matter who’s on the other sideline.”

While the coaching staffs have connections aplenty, there was no love lost late in the game, or afterwards.

Late in the third quarter, on a fourth-and-24, Rustin’s Chase Hatton rolled right for a rugby-style punt, but when there was no one defending the edge, he took off and was tackled inches short of a first down.

Henderson’s staff was not pleased with a fake punt, up 42-0, and after the game Henderson coaches confronted coaches from Rustin, and there were some terse words before each side went their separate ways.

Brice said: “no comment,” when asked about the incident, while St. Clair shared his thoughts.

“We have a first-year punter and it was a rugby punt,” St. Clair said. “(Hatton) was supposed to punt that, and obviously it’s happened two years in a row, but that’s not what we do, and that’s all I can say.”

Outside of that one controversial play, there was not much else up for debate. Rustin (1-0) looked very much like its typical self, with a ground-control offense and a swarming defense.

Daimon Jacobs ran for 99 yards, Hatton finished with 83 and a TD, and Joseph Magolon scored on a 27-yard jaunt. The Golden Knights totaled 318 yards on 38 rushes and held Henderson to 19 yards on 24 carries.

“It felt good,” Jacobs said. “I knocked the rust off and my offensive line did great. I should buy them donuts or something.”

Henderson was held to just nine passing yards, as well, while Rustin only completed two passes, with one going for a 70-yard touchdown from David McClain to Nelson Murray.

“It’s a big win,” St. Clair said. “Any time you can beat a tough West Chester Henderson team, in the first game, it’s a job well done. Offense, defense and special teams were all good.”

The Warriors will get another tough test next week, when Kennett comes to town, but Brice fully understands any revival of the program is not coming overnight.

“We have a lot of first-night, Friday night kids,” Brice said. “Overall I’m proud because we fought. There’s a lot to clean up and that comes with time. It’s just one step at a time.”