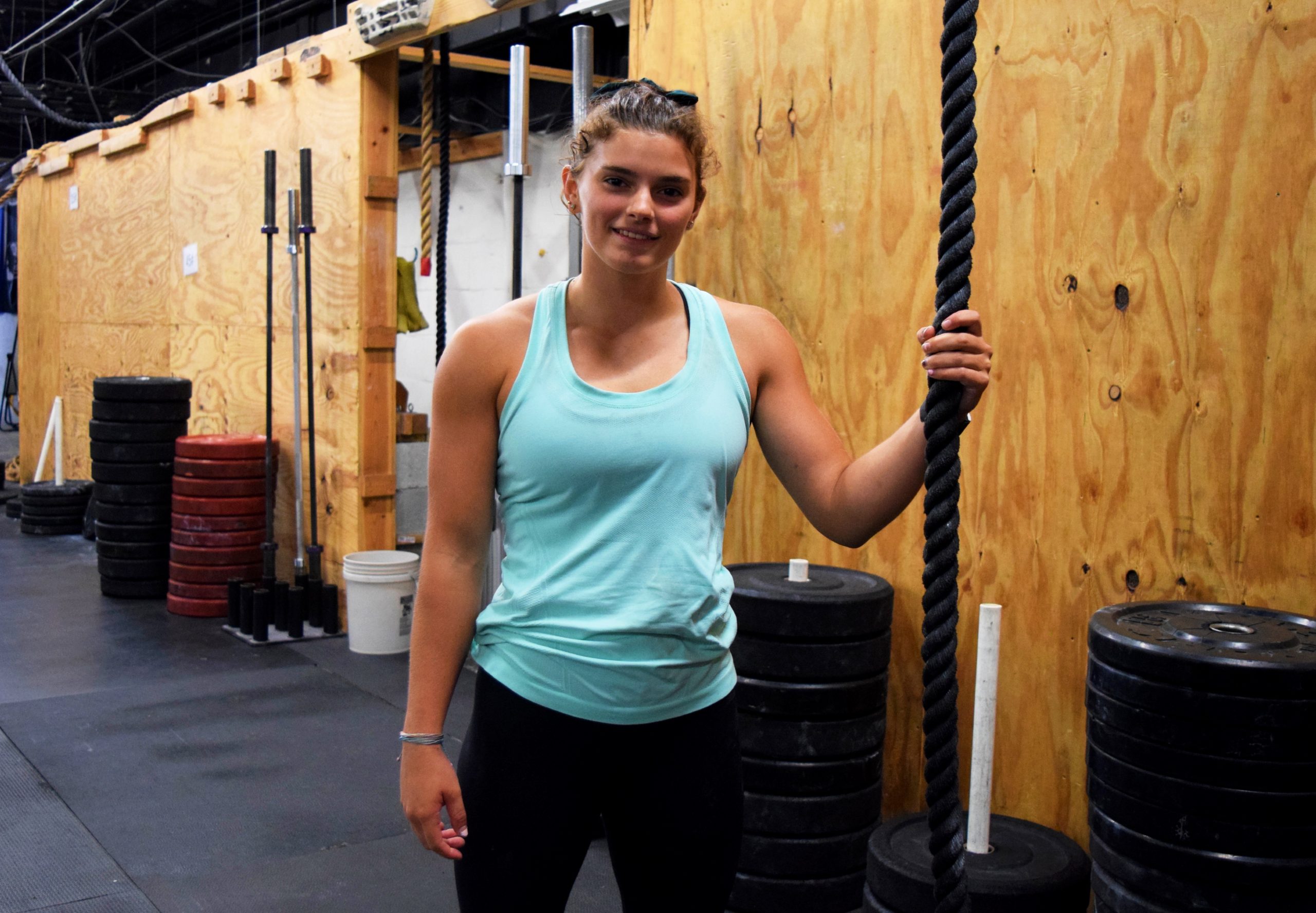 Reese Littlewood, an East Coventry resident and rising Owen J. Roberts junior, has qualified for the CrossFit Games, set for next week in Madison, Wis. Littlewood, who trains at Iron Cross Athletics in Phoenixville, went through three rounds of qualification finishing top 10 in the world in the girls' 14-15 year-old division. (Austin Hertzog - MediaNews Group)

The world was at a crossroads. So was Reese Littlewood.

The COVID-19 pandemic shutdown of March 2020 that halted much of society remains a wrinkle in time. “In these uncertain times” became the default tagline to an era that was as described.

But it was also a time of reflection. Of renewal. Of new beginnings.

“With lockdown, obviously we weren’t going to gymnastics, but I can’t do nothing. I needed to work out and stay in shape,” Littlewood said.

That’s when she discovered CrossFit, the exercise regimen blending elements from high-intensity interval training, weightlifting, plyometrics and other exercises that has become a fitness phenomenon in the last 15 years.

With a moment to reevaluate, Littlewood found a world of possibilities and different athletic outlets, doors waiting to be opened.

Few doors have been more important to Littlewood in the last two years than the one she opened at Iron Cross Athletics, Phoenixville’s CrossFit home, and began working with owner John Warnek.

That significance will be rivaled next week when Littlewood opens the door to Alliant Energy Center Coliseum in Madison, Wis., the home of the 2022 CrossFit Games.

The 15-year-old Littlewood will enter the CrossFit Games as one of only 10 qualifiers in the girls’ 14-15 year-old division, marking a nearly unthinkable rise after just 18 months participating in CrossFit.

The CrossFit Games are the pinnacle of the sport, considering itself the ultimate proving ground to find the “Fittest Man and Fittest Woman on Earth.” The CrossFit Games are distinctly known for their incorporation of “unknowable” tests of fitness so athletes cannot train for a specific discipline, but instead must be prepared for any and all possibilities.

Only the most elite CrossFit athletes can dream of making the world championships, let alone qualify. The field began with hundreds of thousands of athletes in the Open and now has been trimmed to the top 40 men, 40 women, 240 masters athletes, 80 teenage athletes, and 40 teams from around the world.

Littlewood’s girls’ 14-15 division, which features competitors from the United States, Ireland, Spain, France and Iceland, and other age-group divisions will compete Aug. 4-6.

Thanks in part to four hours of training per day, Littlewood made the CrossFit Games through three rounds of qualifying. Her quarterfinal performance was No. 2 in the world in her age group and she finished fifth in the semifinals, good for top 10 qualification.

In CrossFit, Littlewood has truly found her fit.

“I really love to work out; I like how it feels during and after,” Littlewood said. “It’s enjoyable for me that you can compete even when it’s not a competition. It could be someone to go against, a time to beat, I love doing that.

“I think I had a good background in gymnastics, which helped. And John is a great coach.”

To watch Littlewood easily complete a legless rope climb or do a walk around the room in a handstand, obstacles and all, is far more tangible.

So is the timed workout of 100 elevated GHD (glute-ham developer) sit ups, 16 handstand walks and max rep bar muscle-ups, the timed squat toss of a 14-pound medicine ball to a 10-foot mark for 90 reps and the max rep in the clean and jerk — 180 pounds for Littlewood — that were Workouts 4-6 in the online-conducted semifinals that locked in Littlewood’s trip to Madison.

Littlewood, a rising OJR junior who attended East Coventry Elementary, began gymnastics at an early age and competed at Berks East through age 9 before shifting to Parkettes in Allentown. She ascended to Level 9, the second-highest Junior Olympic level, and competed in national competitions.

The pandemic shutdown allowed for a moment off the merry-go-round and a chance to consider other avenues.

“I had been doing (gymnastics) for a while and I was just ready to do something else. It wasn’t making me excited anymore,” Littlewood said.

Her gymnastics background has contributed to her rapid rise in CrossFit. So have good genes.

Karen Littlewood, Reese’s mom, has a background in endurance athletics, having competed in triathlons and Ironman triathlons. While Reese spent long hours training at Parkettes, Karen found a nearby gym and began competing in Strongman, once reaching nationals.

“She was really good at that,” Reese said of her mother who has since become hooked on CrossFit. “She’s a great athlete.”

Karen introduced Reese to CrossFit during quarantine in March 2020 and the pair started downloading ‘WODs’ – workouts of the day in CrossFit parlance – and began competing against each other in the family driveway.

She returned to gymnastics to complete the 2020-21 season but her heart was elsewhere. Reese joined Iron Cross in January 2021 and was hooked after participating in the Open competition in March.

Reese Littlewood walking through the Iron Cross door was a significant moment for Warnek as well.

The Methacton graduate and former West Chester University track and field thrower opened Iron Cross Athletics in 2011 with his wife, Nikki, but in that time had not coached a Games-level athlete.

“I didn’t have a Games-(level) athlete handed to me — I would not have been successful in that setting,” Warnek said. “I’ve been able to ramp up as she’s ramped up.”

In Littlewood, Warnek sees a rare blend of “absolute devotion,” love for hard work, and an analytical approach that has clicked with CrossFit.

“She’s genetically different and has a far different mindset than any athlete I’ve come across. Not only does she do everything I ask of her, but she enjoys it,” Warnek said. “She comes out of a room after doing an unreal number of reps of a workout with a big smile on her face ready to go and do the next thing.”

Where most athletes plateau in building strength, Littlewood kept raising the ceiling, according to Warnek.

“I’ve worked a lot with teams — when I was a teacher I was a track and field coach so I was dealing with mostly throwers — and I’ve seen that strength curve really go up. But we set a series of benchmarks of what it would take to just have a shot at making the Games. We would have to hit them by a May timeframe … and she cleared them all off the table by October.

“And these were goals that I viewed as exceedingly lofty, not like ‘you’re going to hit these,’ but rather ‘if the worlds all align you might hit these.’ And she was months ahead. Her body’s ability to pick things up after a little struggle is unbelievable.”

Their analytical approach matches one another and they’ve turned success into a science.

“I don’t think there was a sharp turn of events, more just the natural progression,” Littlewood said. “John was really good about figuring out what things I needed to be doing, what paces would be top 10 paces. From there we kept building and eventually it worked out.”

While most competitions have shifted to an online format in the pandemic era, Littlewood was able to experience one large, live CrossFit competition when she competed at the Wodapalooza CrossFit Festival in Miami in January.

“That was my first big-deal travel experience. It was awesome,” Littlewood said. “At first I was like, ‘This is totally out of my league. I should not be here.’ But the last day I did well in events, I felt like I could hang and I liked doing it. It was great. I just wanted to go back right afterwards.”

There she crossed paths with the top-ranked athlete in her division, Northern Ireland’s Lucy McGonigle.

The pair later struck up a friendship when Littlewood was on a twice-postponed family trip to Ireland and reached out to McGonigle, who was runner-up at the CrossFit Games in 2021.

“Once we found out I’d be going to the Games, we wanted to do some training while we were there,” Littlewood said. “I met Lucy, who is the leader of my division — she’s been wiping the floor with everyone this year — at Wodapalooza in January. A few months later, in May, I reached out to her on Instagram and said I’d be in Ireland. … She wrote back so positive, said she’d love to. She lives in Belfast and we were in Dublin, but we took a train out, trained with her for a few hours and me and my mom took the train back. It was great to get to meet up with her, find out more about her outside of the competitive field.”

CrossFit is known for its vibrant, uplifting fitness community.

Littlewood has felt that and then some from the Iron Cross Athletics community and community on the whole. Large groups have purchased “Littlewood” T-shirts to show support.

“Everyone is so nice and supportive. It’s crazy,” Littlewood said. “Even when I first started and did the Open, I was so shocked at how everyone cheers for everyone. There’s no enemies and everyone is so loving. It was crazy when I made the Games, the things people did and said, it was so sweet.

“It’s like the best community ever. Everyone is able to do the same thing which is to come in here and work hard and get better. I love that everyone is always so supportive of each other.”

It’s a vibe Warnek has worked to cultivate at Iron Cross Athletics, located at 1041 West Bridge Street in Phoenixville, which he feels achieved its own rebirth after a 109-day shutdown at the start of the pandemic.

Warnek says long-term members said it was the “best thing that ever happened to us” because it allowed them to tune up the operation.

“It was an opportunity to revamp everything that’s wrong. You can’t see everything, but everything that was a glaring issue we tried to address. … We reduced the class sizes substantially so everyone would have their own piece of equipment, which allows warmup to be more thorough, for our instruction to be more in depth and dial people in.

“It also helped us redefine what our goals were. I was so in the thick of things I couldn’t always see what our real purpose was. But now it’s a lot more clear to me that our general purpose is to help the community and make Phoenixville fitter.”

Iron Cross, which has 200-250 members, holds free classes every other Sunday and runs free programs at the rec center. Warnek’s long-term goal is to create an entirely-free teen program.

He doesn’t need to go far to display what greatness a teenage competitor can achieve.