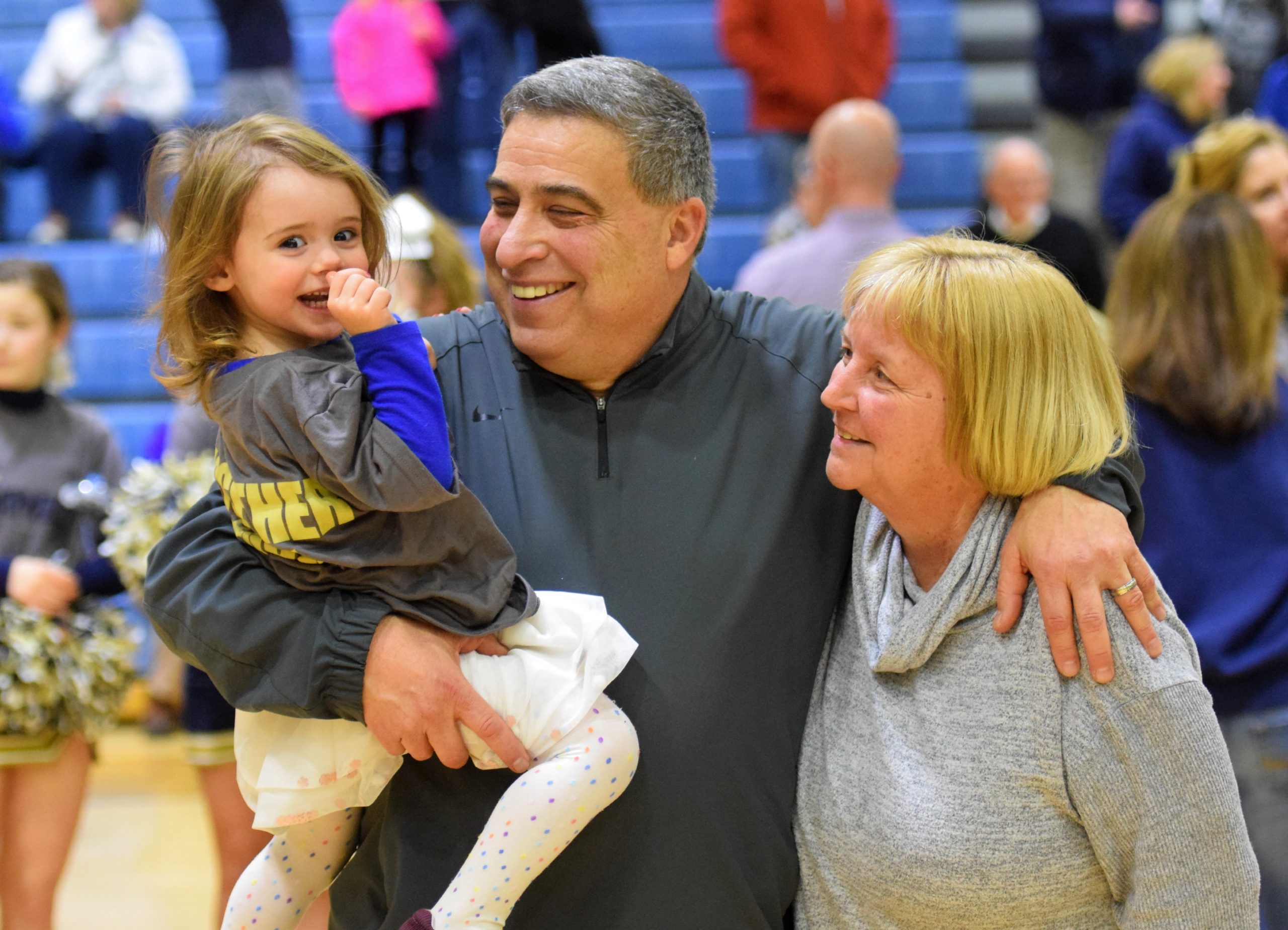 There’s another moniker Mickey McDaniel has earned over time: “Mr. Spring-Ford.” It’s one accorded him in recognition of the extent to which he’s discharged his duties as athletic director for the Spring-Ford School District … his own “lifetime achievement” award. It’s one he’ll take into retirement from that position, and deservedly so.

“Truly Mr. Spring-Ford,” John Brennan, teacher and boys’ tennis head coach, said. “He puts the school and athletics above other things. You hear Spring-Ford, and you associate him with it.”

Come August 1, McDaniel will step away from a post he’s held and mastered since 1995, having taken it over from Dave Caldwell. He plans to remain active as the school’s head girls basketball coach, a job he assumed back in 2013 after being an assistant to former head coach Jeff Rinehimer since 1995.

That was just part of the “full plate” McDaniel had over the years. While overseeing the various high-school and middle-school athletic programs in the district, the 1973 Spring-Ford graduate also filled prominent roles in the Pioneer Athletic Conference and the Pennsylvania Interscholastic Athletic Association.

Among the significant projects in which McDaniel was involved were the installation of a turf playing surface at Coach McNelly Stadium, and the building of Ram Stadium for baseball and Ram Park for softball. He oversaw a five-year plan which added fields for junior-varsity baseball and softball, three multi-purpose fields and three rest-room buildings.

The expansion of athletic programs was something else that took place on his watch. A total of 17 sports in the middle and high school, as well as second Grade 7 Level sports for boys and girls soccer, boys and girls basketball, baseball and softball were initiated.

Championships by the bushel were a frequent occurrence during McDaniel’s tenure: 101 in Pioneer Athletic Conference competition, 17 at the sectional/district/regional levels, and three state titles. The proof of that abundant success is displayed in the championship banners that hang from the rafters in the Spring-Ford gymnasium.

”I must admit, I believed my contributions would be judged only on how many programs we started, championships won, the enhancement of facilities, new facilities built and so on,“ he said, “but as I grew in the position, I came to the realization leading by example would be the biggest contribution I could leave Spring-Ford’s athletic program.

“In leadership, your words own a lot of weight, but your actions bear the scrutiny. So maintaining the ethics and actions that you ask your student-athletes to embody is critical in running a strong program and setting a foundation that I know will continue to be a Spring-Ford legacy.”
Mickey possessed a simple philosophy toward the performance of his duties.

“Do everything to the best of your ability, and always do the right thing,” he said.

He also cited one personal attribute playing a role in his success as AD.

“Compassion,” he said. “Young people want to know someone cares and recognizes not only their achievements, but their struggles. Combining that compassion with structure hopefully allowed us to build a program that they felt like it was their own, something they could be proud of, which aided in their success.” Daniel Miscavage, McDaniel’s assistant AD, has known his boss since his own high-school days. He played on the boys basketball team under Caldwell, a program in which McDaniel was a volunteer assistant from 1986 to 1995 for both him (1989-95) and Rich Simon (1986-89).

“After I graduated and got my job at SF,” Miscavage recalled, “I immediately migrated to the AD office to help Mickey in any way I could.”

In testament to Mickey’s strong stature as AD, the district recently named Miscavage his successor. It’s a decision that’s been well-received in various circles around the area.

“He always has a student-athlete-first approach,” Miscavage said. “Every decision he has made has been with the student-athlete, and more importantly Spring-Ford, first.”

One amenity Mickey arranged for athletic teams advancing to state-level playoffs was transportation in the form of luxury buses. The most recent recipient of that amenity was the school’s softball team, which traveled in style to games on the way to winning the PIAA’s Class 6A championship in mid-June.

A similar focus was on upgrading team schedules with higher-talent opponents as a program improved over time.

“Once we had success … it wasn’t just about league schedules,” Brennan said. “He’d get us non-league matches with the Radnors and Conestogas. Same with girls golf. He got us in a tournament at Penn State.”

“Mickey cares more about the community, the school district, and the athletic programs more than any athletic director I’ve ever been around,” Chad Brubaker, the high school’s head football coach, observed.

McDaniel’s involvement in sports programs extends beyond the boundaries of the twin-borough district, touching the four corners of Pennsylvania.
A member of the Pennsylvania State Athletic Directors Association (PSADA), he has been on the State Executive Council since 1997 and served on a number of committees and capacities. He’s also been an alternate representative on the PIAA District One Committee, a member of the PIAA AD Executive Council and the Florida-based KSA board.

Awards and recognition have accompanied McDaniel over the years. He was the PSADA’s Regional Athletic Director of the Year in 2006, and this past year he was enshrined in the Tri-County Chapter of the Pennsylvania Sports Hall of Fame.

“Over the years, Mickey has been a tremendous leader and advocate for our school district,” Jennie Anderson, the high school’s field hockey coach, said. “He has impacted a multitude of student athletes and coaches throughout his tenure as Athletic Director.

“For me personally, his support and care to see teams succeed has been invaluable in my growth as a coach. He represents what Spring-Ford is all about, and we will miss his leadership and what he has brought to our district over the course of his career.”

In his head-coaching capacity with the girls basketball program, Mickey was twice accorded All-Area Coach of the Year honors in 2014 and 2021. His career record currently stands at 197-62, and his teams have won six PAC championships, one District 1 Class 6A title and twice played in the PIAA 6A championship game over the past nine seasons.

One significant aspect of McDaniel’s service as Spring-Ford’s AD is the degree of respect he garnered outside the district. Todd Reagan, the high school’s girls tennis coach, cited “the wide spread net of kindness and sportsmanship that Mickey exuded.”

“Through his leadership, the value of sportsmanship and respect for the opponent has been an essential element of what we try to include in our program,” Reagan said. “Over the past couple of years, as our program has travelled through league, district and state playoffs, so many people see the Spring-Ford uniform and immediately come over to me and ask, ‘How’s Mickey’? They follow that up with a short dissertation about how awesome he is, and a great story.”

“Knowing the insane hours he keeps to run the athletic department, and to have so many successful programs while maintaining so many positive relationships with opponents and administration from other schools, District 1 officials and PIAA staff is amazing.”
Miscavage concurred.

“There has been very few ADs in District 1 or PIAA who have garnered as much respect as Mickey has,” Miscavage said. The numerous teams, players, officials, school officials who have complimented Mickey on how he runs the athletic department are too many to count. The multiple sportsmanship awards Spring-Ford has won are mostly due to how Mickey runs things at SF.”

McDaniel’s retirement plans don’t call for him taking up residence in a rocking chair, or anything even remotely sedentary.

“The concept of retirement has yet to hit me, but I know Becky (wife) and I will travel more, which includes Chicago concerts in different parts of the country. We will be able to spend more quality time with our family and can watch the growth our grandchildren, Maxwell and Mason.

“I am excited about the opportunity to invest even more time into the girls’ basketball program in and out of season.”

“I am proud to not only call him my mentor, but my friend and he will be sorely missed,” Miscavage said.