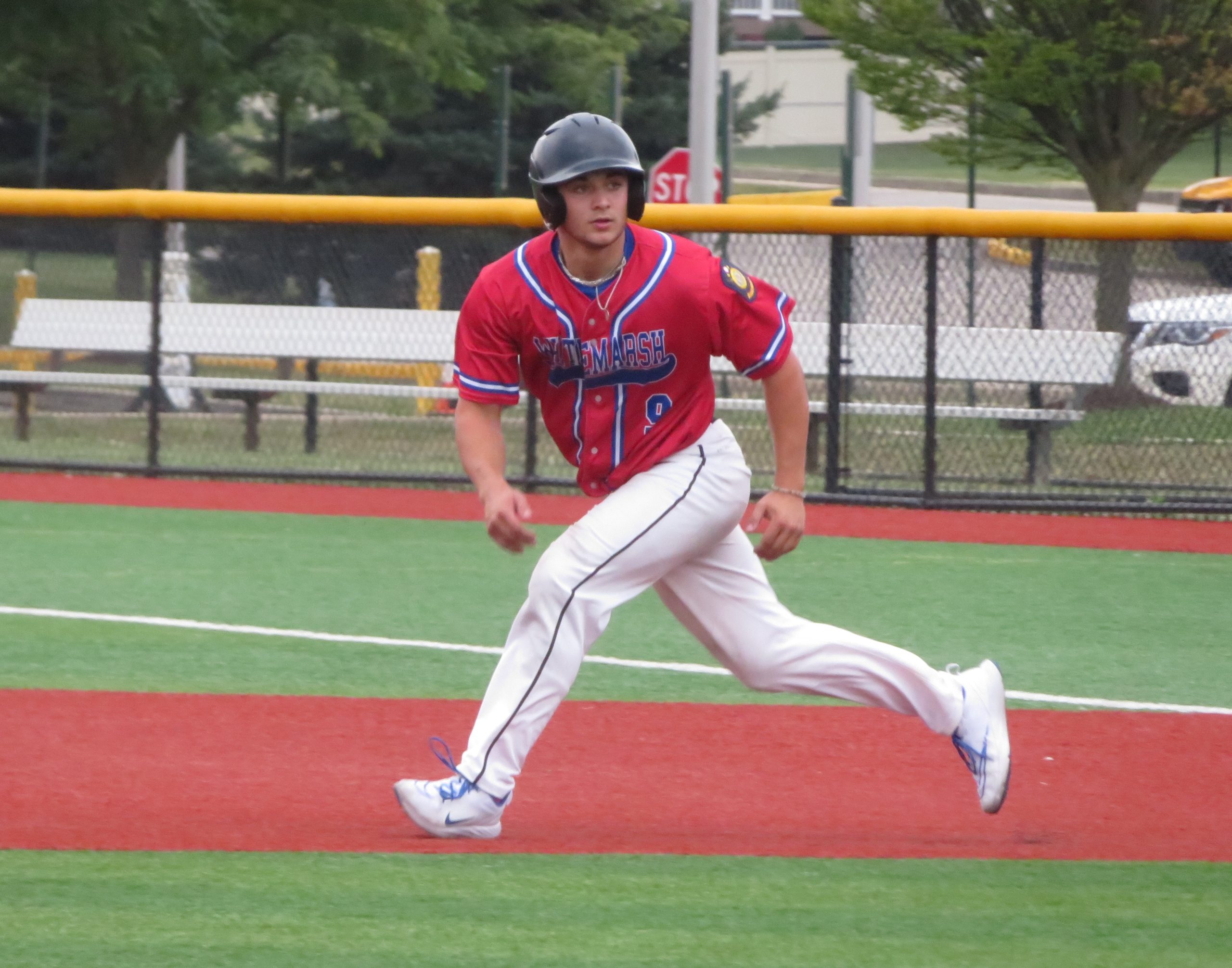 WHITEMARSH >> Vince Fattore doesn’t take much time away from baseball.

When the recent Penn Charter graduate and incoming Duke University freshman made an impromptu trip home this weekend, one of the first things he did was get in touch with his legion coaches about playing.

He hit second in the Whitemarsh lineup and played center field Friday night with the top-seeded Patriots facing elimination. He went 2-for-3 with three RBIs, three runs scored and two walks to lead the Patriots to a 14-4 win over No. 3 Mount Carmel in six innings in the Greater Norristown American Legion Baseball League loser’s bracket semifinals at Plymouth Whitemarsh High School.

“I’m addicted to (baseball),” Fattore, who played in six regular season games before heading to Duke to train and take classes a couple weeks ago, said of his approach. “Obviously I’m going to Duke for baseball. I’m always itching to get at-bats. Come home, see my family. I love playing here – PW has a great field. It’s fun playing with this group of guys, great people. It’s an enjoyable time.

“We weren’t facing that much velocity so I was just trying to stay on top, get in my back hip, line drive type of day. Work gaps, get on base as much as possible, take walks. I get on base I know that Michael Miller right behind me is going to drive me in 95% of the time. It’s nice to have backup when I get on.”

Fattore plated the first run of the game in the bottom of the first inning. After Joe Redmond reached on an error, Fattore doubled to make it a 1-0 game. Miller followed with a double, scoring Fattore and extending the lead to two runs. The Mounties limited the damage in the first inning by getting a bases-loaded double play to keep it a 2-0 game.

The Patriots were right back at it in the second. Fattore hit a two-run triple and, three batters later, Gavin Rocks hit a triple of his own, plating three more. The five-run inning put Whitemarsh ahead, 7-0.

“We barely hit the ball at all (Thursday),” Miller said of a 7-1 loss to JP Mascaro. “Going out and scoring seven runs in those first two innings was great… It’s going to help our confidence a lot. We’ll be fine. We just had an off-game (Thursday). I think we can win this thing. I’m excited.”

Mount Carmel responded with four runs in the top of the third. Luke Hildebrand scored on a wild pitch before Conlan Carpenter hit a two-run double. TJ Picard’s sacrifice fly made it 7-4.

“Coming back from the beginning of the season and putting up these runs,” Mounties coach Rocco Cione said, “it was a big improvement from how we started.”

Rocks grounded out with a runner on third to extend it to an 8-4 Whitemarsh lead in the bottom of the fourth.

That score held until the bottom of the sixth, when the Patriots exploded for six runs to put the 10-run rule into effect and end the game. Lincoln Sharpe hit an RBI single, Colin Brady an RBI triple, Tom Convey a two-run double and Miller a two-run walk-off single.

Angelo Rosley got the win for Whitemarsh. He allowed four runs on two hits in two innings with four walks.

Chase Fisher and Tom Flaherty combined for four no-hit, shutout innings. Fisher struck out three batters to one walk while Flaherty fanned two and walked one.

“I thought they threw well,” Miller, Whitemarsh’s catcher, said of the three pitchers. “Threw a lot of strikes, pitched to contact. We made good plays in the field. I thought we did well today. Really good on the mound and especially defensively. Our defense played great behind our pitching.” Asher Guarino took the loss for Mount Carmel. In 1 1/3 innings he allowed seven runs on five hits. He struck out two batters and walked two.

Picard came on in relief and allowed seven runs on four hits in 4 1/3 innings. He struck out three batters to eight walks.

“It’s tough getting in that hole early,” Cione said. “We’re young, though. We’re all 15 and 16. They’re a great team over there. They hit and we didn’t tonight. That was it.

“We went from one win last year to five wins this year. We’re young, we’re improving, we’re sure to get better next year. We’ll be ready to go next year.” Whitemarsh will face JP Mascaro in the loser’s bracket final Saturday. The winner face Perk Valley in the championship Sunday.