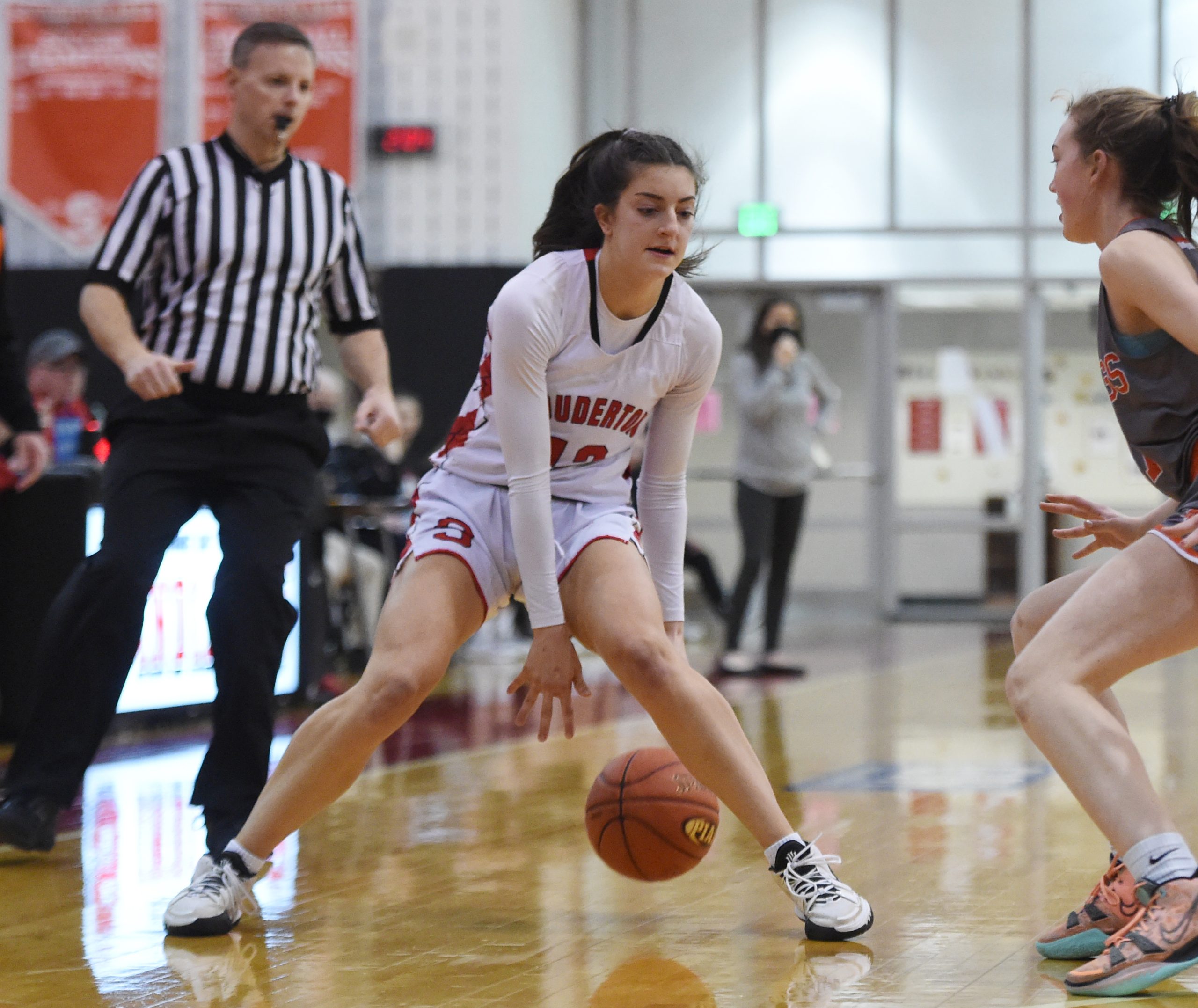 Casey Harter’s recruitment ended where it was supposed to, even if it was at a place she hadn’t expected.

The rising senior at Souderton thought she’d be staying close to home to play college basketball but standing on the banks of Lake Michigan with her family last weekend, that all changed. While things had all come together rather quickly, it didn’t feel rushed, it just felt right.

It felt so right that Harter didn’t hesitate, announcing her commitment to continue her career at Northwestern on June 25.

“I picked the school where I fit best and really see myself but the opportunity to build relationships with other coaches and the chance to talk to so many people is something I’m not going to take for granted,” Harter said. “I’ve gotten to learn so much more about myself talking to all these different people, it’s been such a great experience.”

From Harter’s first day in Souderton’s gym, Indians coach Lynn Carroll already put the guard in a tier with the best perimeter defenders she’d ever coached and saw a player who came back better and better with each passing year. It started drawing in college coaches around the time Harter was a sophomore.

After the first live period this spring, the deluge finally came. Carroll’s phone was bombarded by so many coaches she lost track of what programs had reached out – although a call from Standford coach Tara VanDerveer – the all-time winningest coach in NCAA history certainly stuck out – she looked at it as validation.

“I couldn’t be happier for her, I kept saying she was getting under-recruited, I think everyone kind of felt that way,” Carroll said. “This AAU season started and she kind of blew up and was finally getting recognized in a way I felt she had earned.”

Harter had her parents Mark and Angela, who both played in college, as a resource and she started to form an idea of what she wanted from a basketball fit and academic fit. Along with Northwestern, Harter noted Providence, Harvard, Loyola-Maryland and Charleston as programs that made a strong impression on her.

Having her recruitment pick up so much this spring could be overwhelming at times, but Harter tried to take something out of each conversation with every coach or program that reached out. When the Wildcats first got in touch after the live period in April, Harter had a better picture of what she wanted and quickly saw all of it in one of the Big Ten’s top programs.

“I didn’t know what to think of it at first, but I realized it wasn’t the conference that played the biggest part,” Harter said. “I was talking to schools from the Big East, the Ivy League, the Patriot League, yes the Big Ten is an amazing conference and it was a little scary at first but it was an amazing experience and I think it’ll all work out. I’m excited for the challenge and I think it’s going to be really good for me.”

The Wildcats, helmed by Father Judge Hall of Famer Joe McKeown, really liked Harter’s versatility and her defensive intangibles. It was a mutual interest, so Harter and her family made an official visit the weekend prior to her announcement where she got to meet the current players on the roster and talk to each coach face-to-face.

Harter expected it was going to take several days to process everything, but only a day or two later, she knew it was Northwestern.

“One of the things I’m really good at is defense, it’s what I take pride in and I think they could see that and they know that,” Harter said. “They have a defense they think I would fit really well into, we talked about that. Offensively, they can see I’m able to run, I can get rebounds and push it and playing (AAU) with Comets, it’s a team program and that really fits into their program as well.”

It didn’t matter where Harter ended up, Carroll knew whatever program she chose was getting a player that still has plenty to unlock. Sure, the defense that Harter provides is undeniable but what stands out to Carroll as much is Harter’s willingness to work on her deficiencies.

The knock on Harter as a freshman and sophomore was her lack of scoring and perimeter shooting. After starting to add a 3-point shot in her second year with the Indians, Harter came back a more willing shooter this past season and it reflected in her numbers.

“I think prior to high school, she was very successful due to her athleticism but sometimes that can be a curse when you’re younger, if you’re faster than everybody, if you’re smarter than everybody and you’re just able to be successful off that,” Carroll said. “What makes her unique is she just has continued to elevate her game every single year and she does it in a thoughtful way. From sophomore to junior year, what a huge leap she made, she doubled her points per game because she goes out and she works.”

Harter is looking forward to a busy July with her Comets team but she’s also fitting in plenty of time to keep up her conditioning, strength training and individual workouts ahead of her senior season at Souderton. The Indians made the state tournament last season, the second time in her three seasons, but she has yet to advance past the first round.

With every player from last season set to return, plus more than a few of them following Harter’s lead, the Indians’ coach isn’t expecting her senior point guard to start coasting now.

“It’s in her blood to play the way she plays, she doesn’t know how to not play hard,” Carroll said. “For us, it’s 32 minutes every night. I have no worries at all that she’s going to take her foot off the gas or not play as hard, it’s just a part of her DNA.”