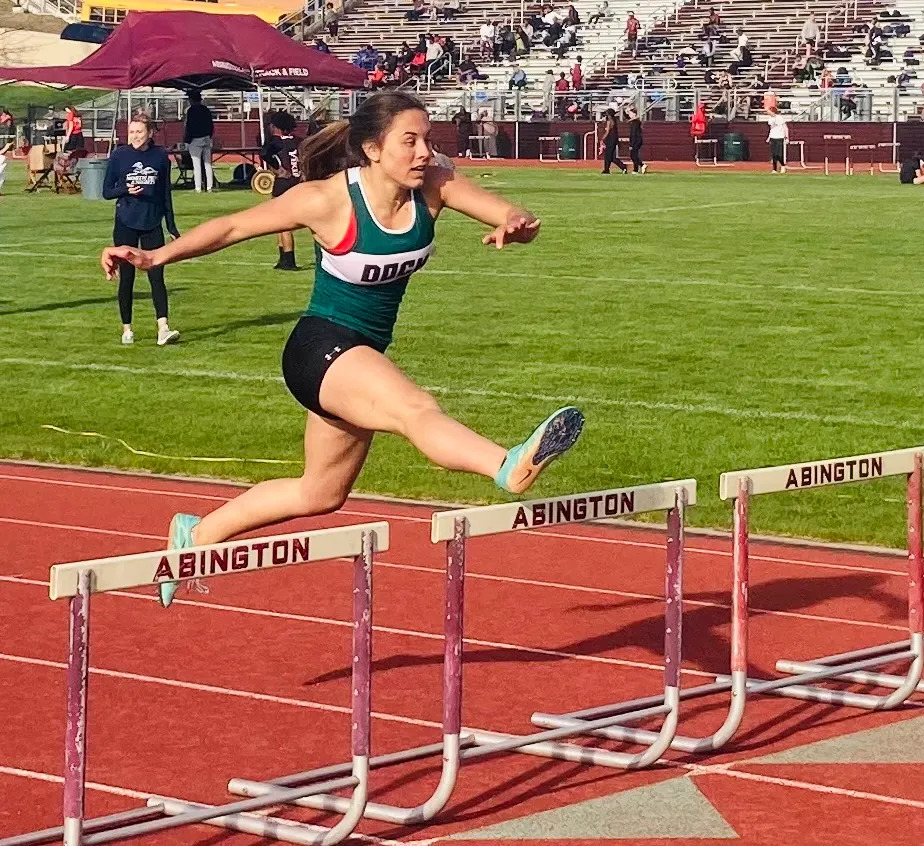 Clara Benner of Dock is seen at the Jack Armstrong Invite at Abington on Friday, April 22, 2022. (Kev Hunter/MediaNews Group)

Postseason glory extended all the way to the PIAA State Championships for the 2022 Reporter/Times Herald/Montgomery Media All-Area Track and Field Team.

The Cheltenham 4×100 and Central Bucks West 4×400 relay teams each ran to state gold out in Shippensburg, with the Pennridge 4×8 capturing silver.

Veronica Vacca, just a freshman, captured a state title in the pole vault, setting up what should be a tremendous career at Mount St. Joseph.

Lillian DiCola of Hatboro-Horsham races to first in the 1,600 at the Jack Armstrong Invite at Abington on Friday, April 22, 2022. (Kev Hunter/MediaNews Group)

Another freshman, Lillian DiCola of Hatboro-Horsham, set a demanding pace in the 3,200 all season long while sophomores Mimi Duffy of Central Bucks West (100 dash) and Ella Woehlcke of Mount St. Joseph (1,600) were major point scorers in their respective events.

Cecilia Abruzzo of Pope John Paul II stood out in the 200 dash while Ashley Landis, a freshman at Pennridge, emerged as a force in the 800.

Clara Benner of Dock captured the District 1-2A title in the 100 hurdles while Cheltenham’s Mariah Winfield was exceptional in the 300 hurdles in Class 3A.

Eyota Bey was a tremendous all-around performer all spring for the Panthers, including her excellence in the 400 dash and 4×1 relay.

Cheltenham’s success extended out into the field, where Donya Baxter reached states in the shot put.

North Penn had a pair of outstanding performers in the field, as Dominique Bethel excelled in the discus and Madison Gee stood out in the long jump.

Mount had a terrific thrower in Haley Stefanik, who threw over 100 feet in the javelin, while Upper Moreland’s Gabrielle Teel (triple jump) and Methacton’s Addison Gormley (high jump) were stalwarts in their respective events.