Girls Track Athlete of the Year: Injury slowed Haverford’s Leneweaver, but only after impressive PIAA meet 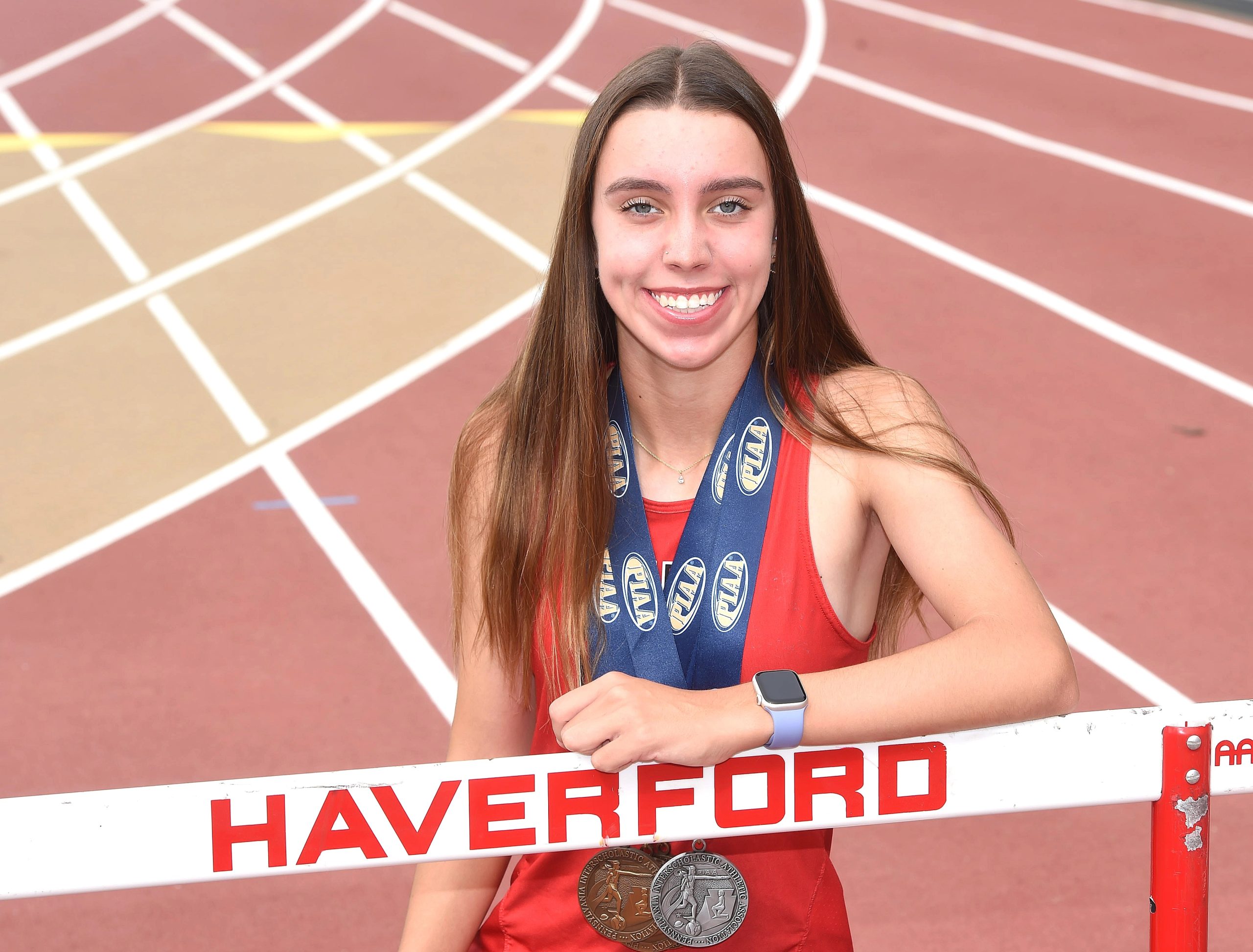 HAVERFORD — The spill was a nasty one. It usually is when a runner hits a hurdle.

Haverford’s Aubrey Leneweaver clipped the final hurdle in the preliminary round of the 300-meter intermediate hurdles at the District 1 Class 3A championships and fell to the track, but got up and still managed to finish with the second-fastest qualifying time.

Leneweaver would go on to win a silver medal in the 300 hurdles and bronze medals in the 100 hurdles and 4 x 400 relay to earn a trip to the PIAA championships in all three events. Eventually, though, the pain did set in. “We had our workout day on Monday,” Leneweaver recalled. “That’s when I felt it. I actually had to cut the workout early. I couldn’t finish our set because I was in too much pain. It hurt to walk.”

As she would find out later, Leneweaver suffered a stress reaction in her right foot. If left untreated it could develop into a stress fracture. Normally, it takes 6-8 weeks for a stress reaction to heal but Leneweaver didn’t have that kind of time. The PIAA championships were just four days away.

“I had to be there for my team,” Leneweaver said. “I still wanted to go. At states, that’s where I really felt it. My body was in so much pain. But as I started to loosen up it started to feel better but (the pain) was still there in the back of my mind.”

Leneweaver wound up in a boot a week later but not before earning three medals at the state meet to help the Fords finish in a tie for second place in the team standings. She placed second in the 300 hurdles, third in the 100 hurdles and was on the 4 x 400 relay squad that finished fourth.

She was involved in 19 of the 24 points the Fords scored that day to become the first athlete in Haverford history, boys or girls, to earn Athlete of the Year honors in track and field from the Daily Times.

The All-Delco team was selected by the Daily Times sports staff following consultation with county coaches.

Next to her three medals at the district and state championships, Leneweaver’s crowning achievement came at the Central League championships, when she set the county record in the 300 hurdles with a blistering time of 43.17 seconds. That was nearly a four-second jump from her best as a sophomore (47.02) and came in the most competitive event in the county. Sydnor and Winward also medaled in the 300 at the state meet, and LaForest missed making the final by one spot.

“Coming in they were all super nice and at the time I was a sophomore and they were juniors and after the season ended I knew I had something to strive for,” Leneweaver said. “I’m going to go for it next year and I thought it was great to be right there with them.”

Lenweaver put in the work over the summer. With a training schedule devised by Haverford coach Amber Jenkins, Leneweaver won the first seven 300 hurdles events she ran and consistently lowered her time until she broke the 44-second barrier, one of only five county runners to do so since 2000.

“The workouts our coaches gave us really helped with my success in the 300,” Leneweaver said. “Having that good 400 and 800 training helped with my endurance. I’m not tired after the 300. Last year I would be dead. I would be so out of breath and this year I walked off the track like it was nothing. My coaches definitely helped me with that.”

Her father, Bob, has played a big role in her development, too. He was a pretty good athlete in his day. He still holds the Neshaminy High School record for the high jump (6-9) and was part of a record-setting shuttle hurdles relay team at Saint Joseph’s.

“I didn’t even want to hurdle,” Leneweaver said. “My dad, in middle school, said I think you should really get into this and he had the hurdle at the track at its lowest height and I couldn’t get over it. Eventually, I got over that fear. I wish I would have listened to him sooner because my progression would have been a lot better.”

She’s listening now. This summer is adding a few more events to her resume with the help of her father. Once she heals she’s going to be working on the long jump, triple jump and javelin. Her ultimate goal in college is to compete in the heptathlon, a seven-event competition that consists of the 100 hurdles, 200, 800, long jump, triple jump javelin and shot put.

“It depends on what colleges reach out to me and if they would want me to do it, then I’ll go with that,” Leneweaver said. “If they say they want me to focus on hurdles, I’ll focus on hurdles. The shot put’s definitely going to be a struggle, but it’s something I think would be cool to try. I think it’s cool to do all these different events and not just focus on one event.”