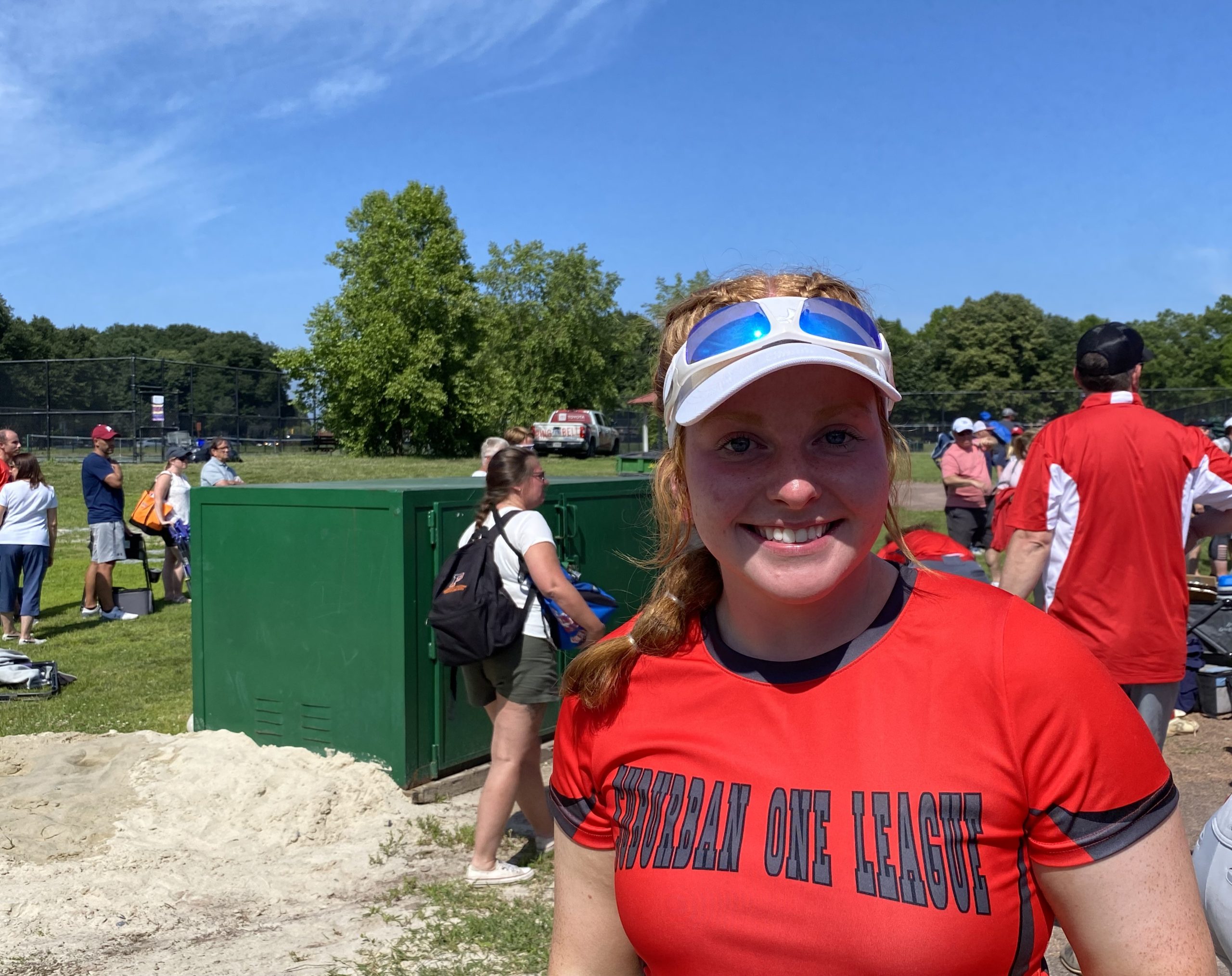 PHILADELPHIA >> Katie Muller accomplished the feat and it was still a bit unbelievable for the rising Quakertown senior.

After hitting triples in her first two at-bats in the Suburban One League’s Softball Carpenter Cup contest with Lehigh Valley Monday afternoon at FDR Park, Muller led off the bottom of the fourth inning by belting a ball into the left-center field gap and raced around the baes to reach third once again.

“I was shocked,” said Muller of triple No. 3. “That one I honestly didn’t even think was going to go that far cause it was a lower pitch. But it carried.”

Muller scored after all three of her hits while her second triple with two outs in the third drove in the first of seven runs for SOL in the frame, flipping a 5-1 deficit into a 8-5 lead.

Suburban One tacked on a run in the fourth then held off Lehigh Valley to claim a 9-7 victory in a game called after six innings due to the tournament’s one-hour, 45-minute time limit in pool play.

“Before the game Coach [David] Scott mentioned how deep the fences were and that if you could get a hold of the ball in the gap it was going to go far,” Muller said. “So I did it for the first one then kept it going.”

The victory capped a 2-1 day for the SOL, an effort good enough to earn the top seed in the four-team Bracket A and advance to the quarterfinal round to face Bracket C’s second seed 9 a.m. Wednesday. SOL opened Monday with a 7-4 loss to Chester County but bounced back with a 5-1 win over Delaware County.

“We’re moving on, which is great,” said SOL head coach David Scott, who is also Quakertown’s head coach. “It’s always a crapshoot when you come to something like this. We had one practice as a team so you don’t even know necessarily your personnel real well and for them to play the way they did and come back from that big deficit in that third game that was huge. That was really fun to watch.”

North Penn rising junior Bella Nunn, who was a late addition to the SOL roster, struck out 11 hitters in pitching the first four innings against Lehigh Valley. The right-hander picked up the win, allowing five runs – two earned – on five hits and a walk.

“We got an injury over the weekend to one of our pitchers and she was unable to play,” Scott said. “Rick Torresani at North Penn reached out to me and said ‘Hey I might have a pitcher for ya. Bella’s available.’ And we reached out and Bella was all excited and jumped right at the opportunity so she did great today. It was a lot of fun to watch her pitch.”

With North Penn having Gatorade Pennsylvania Player of the Year Julia Shearer in the circle as it won the District 1-6A title and reached the PIAA semifinals this season, Nunn only pitched three total innings for the Knights. But she showcased her talent Monday starting with throwing four no-hit innings in getting the win against Delco – striking out three and walking one – then bounced back after Lehigh Valley plated five in the top of the second to pitch back-to-back scoreless innings.

“My curve was working and my rise was working pretty well so that was good but the second game the rise it wasn’t working as much,” Nunn said. “That’s what they were hitting off of so once I cut that out they curve was able to take over.”

After consecutive one-out singles by Sydney Reinert (Easton) and Brianna Amey (Emmaus) in the top of the second, Nunn struck out the next batter but Leah Chladny (Bethlehem Catholic) followed with a triple to left center, driving in both runners for a 2-0 LV lead.

Chladny scored on an error on an infield pop fly. Another error put two on for Kate Yadush (Whitehall), who brought both home to make it 5-0 with a single to right and an error on the play that allowed Yadush to reach second.

In the bottom of the second, Muller led off with a triple to right then scored to cut the SOL’s deficit to 5-1 on Moore’s one-out RBI single.

“I was just hitting the ball where it was pitched and trying to take the ball wherever she threw it,” said Muller, who went 3-for-4 with an RBI and three runs scored. “And it worked out well.”

Lehigh Valley put its first batters on in the top of the third after an error and a walk but Nunn proceeded to record three straight strikeouts.

“I was like ‘Shake it off there’s not much you can do about it and just get the next one,’” said Nunn of getting over LV’s five-run second. “I just cancelled out the rise which helped a lot and I focused on the two pitches that were working best for me.”

Abington’s Hailey Hernandez (10) scores for SOL on Katie Muller’s RBI triple in the bottom of the third inning against Lehigh Valley during their Softball Carpenter Cup game on Monday, June 20, 2022 at FDR Park in Philadelphia. (Mike Cabrey/MediaNews Group)

Nunn kept the bottom of the third going with a two-out walk with her courtesy runner Hailey Hernandez (Abington) stealing second then scoring to make it 5-2 when Muller connected on an RBI triple to center.

“Katie was unbelievable,” Scott said. “Like I said to her, three triples in one game is virtually unheard of and for her to do it was phenomenal. She just smashed those three balls, it was great.”

Muller came home as Hannah DeFinis (Pennsbury) reached on an error. Moore got to first due to an error while a Sierra Miller (Souderton) walk loaded the bases. An error after a grounder to the right side by Grace Christie (Souderton) scored two runs, tying the game 5-5.

Ava Storlazzi (Pennsbury) put SOL up 6-5 as she laced a single up the middle, plating Miller. After a single by Marissa Perez (Plymouth Whitemarsh), an error on a pop-up to the infield’s right side allowed two more runs in for an 8-5 lead.

“It was crazy, honestly,” said Muller of the two-out rally. “We just knew that we didn’t want to roll over and give up. And we knew we still had a lot of fight in us. We just wanted to keep it going and once we started with the bats we just knew they were going to keep carrying.”

#SOFTBALL: @2022SOLCC’s Ava Storlazzi (@PburyHSSoftball) lines an RBI single up the middle for a 6-5 lead B3 vs. Lehigh Valley. pic.twitter.com/u3tmRkbKih

Nunn capped her four innings with consecutive strikeouts to finish a 1-2-3 top of the fourth. Muller began the bottom of the frame with her third triple then scored for a 9-5 SOL lead on a DeFinis RBI groundout.

In Lehigh Valley’s half of the fifth, Delaney Troxell (Catasaqua) doubled to left with one out but Moore collected back-to-back strikeouts.

Lehigh Valley pulled within 9-7 with two runs in the top of the sixth. Shayla Morgan (Emmaus) collected a two-out bunt single then scored on an RBI double to left by Aubrey Steiner (Whitehall). An error on an infield pop-up allowed Steiner to come home.

After Nunn reached on an error to begin the bottom of the sixth, the next three SOL batters went down in order but pool play’s time limit ended the game there.

Yadush was 2-for-3 with an RBI while Chladny had two RBIs and two runs scored for Lehigh Valley, which advanced to Wednesday’s quarters as Bracket A’s second seed and face the top seed from Bracket C at 11 a.m. LV beat Delaware County 5-4 then topped Chester County 6-5 before falling to SOL.

Chester County 7, SOL 4 >> Suburban One League cut a 6-1 deficit down to 6-4 with three runs in the top of the sixth but could not complete the comeback as Chesco won the Carpenter Cup opener for both sides.

With Chester up 2-1, Avery Gleason (Pottsgrove) led off the bottom of the fourth with a home run to center. An Ashley Stringer (Coatesville) two-out RBI single made it 4-1.

Chester tacked on two more runs in the fifth on a Catherine Stone (Unionville) RBI double and a RBI sacrifice fly by Ashley Forrest (Upper Perkiomen).

In the top of the sixth, SOL’s Emma Hilton (Quakertown) drew a two-out, bases-loaded walk. Amariah McKnight (Truman) followed with a two-RBI single to make it 6-4 but McKnight was out at second on the play.

A Riley Wiercinski (Avon Grove) RBI single put Chester up 7-4 in the bottom of the sixth.

The Suburban One League team poses for a team photo after its 9-7 win over Lehigh Valley in the Softball Carpenter Cup on Monday, June 20, 2022 at FDR Park in Philadelphia. (Mike Cabrey/MediaNews Group)

SOL 5, Delaware County 1 >> Suburban One grabbed a 1-0 lead in the bottom of the first then scored twice in both the fifth and sixth to pull away for a split in their first two games.

Alleigh Waskie (Neshaminy) put SOL up 3-0 with a two-RBI single in the fifth. Delco cut the margin to 3-1 in the top of the sixth on a RBI single by Shannon Gavigan (Haverford) but in the bottom of the frame Perez hit an RBI double then scored on Hilton’s RBI single the next at-bat.

Hilton finished 2-for-3 with an RBI and a run scored.

SOL took a 1-0 lead in the first as a two-out error on a fly ball by Sophia Azzarano (Lower Moreland) allowed Storlazzi to score.