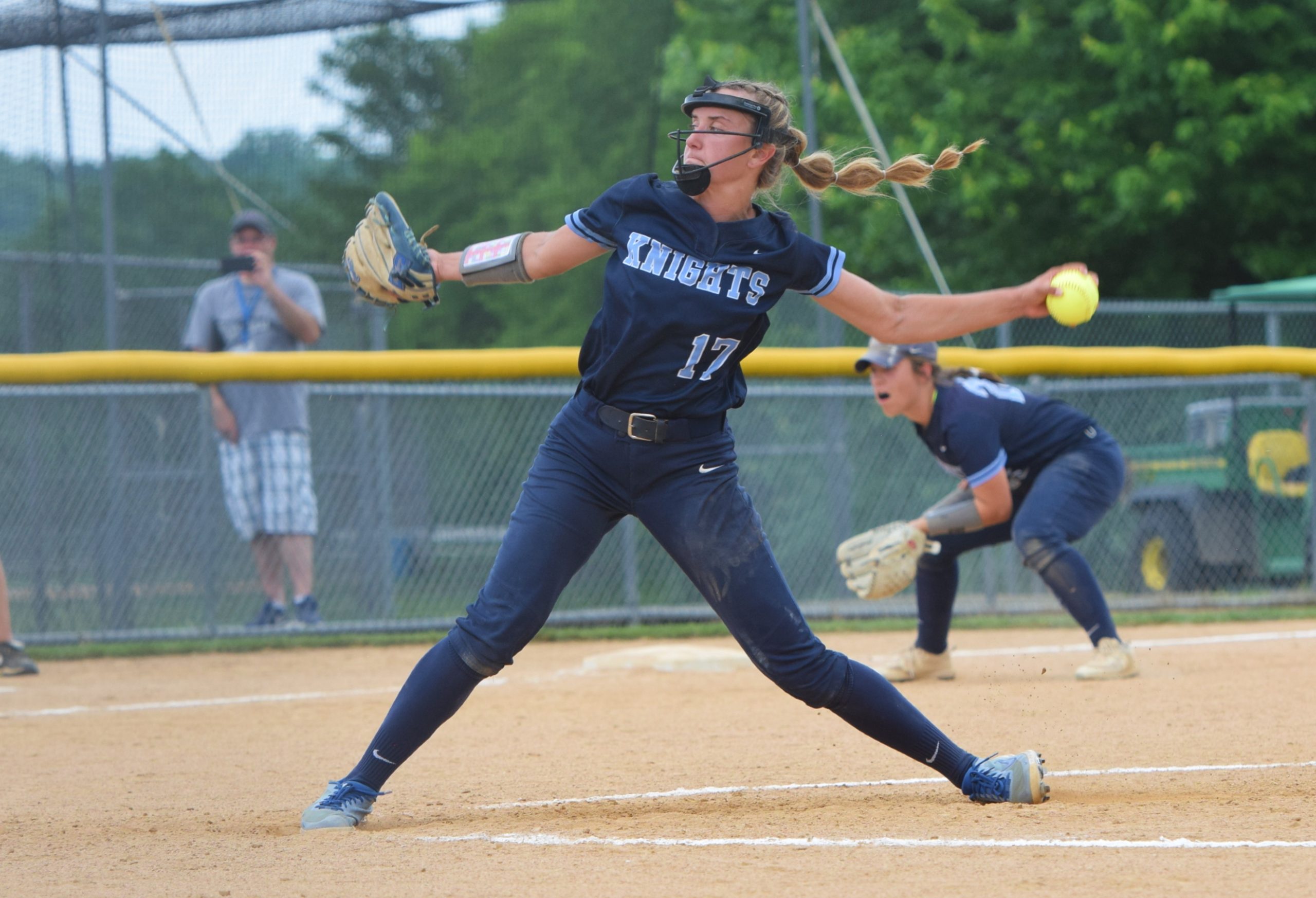 North Penn pitcher Julia Shearer delivers to the plate against Pennsbury during the District 1-6A softball championship on Thursday, June 2, 2022 at Spring-Ford. (Austin Hertzog - MediaNews Group)

As Julia Shearer was getting ready to head up to Wilkes University’s field for North Penn’s PIAA-6A quarterfinal Thursday morning, she got some fantastic news for her travel club coach Dan Santelli.

The Knights junior standout was selected as the 2021-2022 Gatorade Pennsylvania Softball Player of the Year.

“Getting on the bus I got a text saying ‘Congratulations,’” she said. “I was like ‘Huh?’ And then I checked my email, I was like ‘Oh that’s cool.’”

Shearer is the second straight North Penn player to earn the honor after Mady Volpe was chosen for the 2020-2021 award.

“Following Mady in her footsteps, it’s really huge cause people always compare us,” said Shearer after North Penn’s 10-0 win over Williamsport in the state quarters. “But, I mean, doing it for myself, it felt great. I was so thankful. I just ran over to my coach and gave him a big hug as soon as I found out. It just felt great, it made me want to go out there today and prove myself.”

Last season, Volpe, now playing at Coastal Carolina, and Shearer were both Pennsylvania High School Softball Coaches Association Class 6A first-team selections – Volpe was also the PAHSSCA Overall Player of the Year – as the Knights claimed their first PIAA championship since 1985.

The award, per the press release announcing Shearer’s selection, is given not just for ‘outstanding athletic excellence, but also high standards of academic achievement and exemplary character demonstrated on and off the field.” Shearer has a 3.82 grade-point average and also has raised funds to benefit pediatric cancer research and has volunteered on behalf of local youth softball.

“For the program it’s awesome,” Knights coach Rick Torresani said. “We’ve had some great players and now two years in a row getting the Gatorade Player of the Year for two athletes that deserved it.

“But it says a lot for the program all the way back 22 years ago, every kid wearing the shirt has come back once in a while to tell the girls that are playing now ‘You owe us, you owe us to wear that shirt.’ And these kids did it. These kids have done it for the last two, three years have represented North Penn so well.”

Taking over for Volpe in the pitching circle this season, Shearer – who has verbally committed to Maryland – has helped lead North Penn two victories away from defending its state title.

The Knights’ six-inning win over District 4 champion Williamsport Thursday was their 13th straight and improved their overall record to 25-1. North Penn won the Suburban One League Colonial Division title with a 15-1 mark and earned its first District 1 title since 2012 by avenging their lone regular-season loss by beating Pennsbury 5-2 in the final June 2.

North Penn faces Spring-Ford in the state semifinals 7 p.m. Monday at Boyertown. The game is a rematch of the District 1-6A semifinal May 31 where North Penn scored five runs in the top of the seventh to rally past the Rams 5-2.

“Coming into this year I say it all the time I had no idea what to expect,” said Shearer. ‘But getting more and more comfortable as each game goes on it just gives me more confidence to go into the next thing, the next game. I just want to do my thing.”

Heading into the PIAA tournament, Shearer was 23-1 with a 0.30 earned-run average pitching, the left-hander registering 267 strikeouts to just 18 walks over 140 innings.

“I feel confident if I go up there I have great defense behind me, I can just throw my pitches,” she said.

At the plate, Shearer – ranked as the nation’s No. 33 prospect in the Class of 2023 by Extra Innings Softball – began states with a .603 batting average with six home runs and 24 RBIs.

“I’ve just been seeing the ball lately,” Shearer said. “I’m going up there, I’m trying to get on base – that’s my job as a leadoff hitter so that’s what I was doing the last couple games.”

In the first two rounds of the PIAA-6A tournament, Shearer has thrown back-to-back shutouts and also recorded three hits in both games.

In Monday’s 5-0 first-round win over Whitehall, Shearer collected her 100th career hit and finished 3-for-3 and scored three runs while striking out 13 and allowing two hits. In the 10-0 win over Williamsport in the quarterfinals Thursday, Shearer went 3-for-4 with a double, an RBI and a run scored at the plate while striking out 11 in her one-hit shutout.

“You can see, you look at the strikeouts compared to the walks, I mean it’s unbelievable the difference,” Torresani said. “The number of times she runs the bases and hits and then goes out and pitches and from the first pitch in the first inning to the last pitch in the seventh inning, there’s no difference. That’s because that kid worked really, really hard in the offseason to get where she wants to go.”