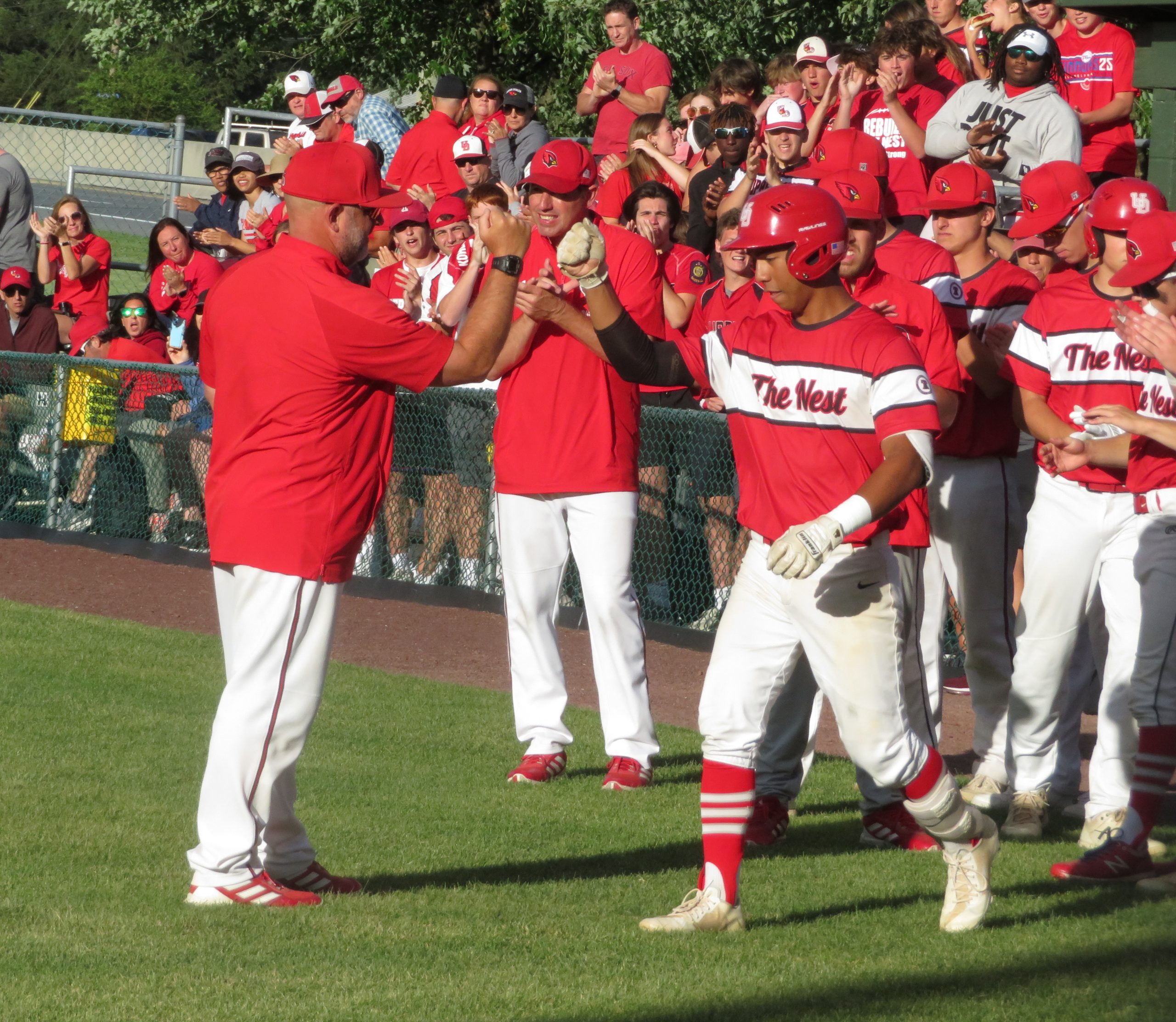 After winning the game in their final at-bat in the District 1-5A quarterfinals, semifinals and championship and in the PIAA-5A state playoff opener, the Cardinals thought they were going to do it again when they trailed by one heading to the top of the seventh in the state quarterfinals.

With two outs and nobody on base, there was still confidence in the Upper Dublin dugout with the top of the order up.

It wasn’t until a few moments after the final pitch that reality set in. A curveball nearly in the dirt was called strike three on Upper Dublin catcher and No. 1 hitter Kyle Rizzo to end the Cardinals season, 8-7, in the PIAA-5A state quarterfinals against Selinsgrove at Earl Wenger Field Thursday night.

“We’ve been in much worse situations than what we were in just now when I came up to bat,” Rizzo said, “but my thought process was I can’t pop up. I have to hit it on the ground or find a gap somewhere. I’ve been hitting a lot of balls that just haven’t been finding the right holes, so I was thinking groundball, line drive, oppo and just do my thing, relax. There was not a doubt in my mind that we (were) going to win the game.”

“I’m going out to the third base dugout thinking, ‘Here we go again,'” Upper Dublin coach Ed Wall said. “I’m just waiting for who’s going to be the guy this time. To their credit, their pitcher was a massive warrior out there and shut us down, didn’t let us get that momentum going, which is what we needed. We needed to get somebody on.”

Upper Dublin (17-4) went down in order in the top of the seventh – two popups and the called third strike – after falling behind 8-7 in the bottom of the sixth.

Selinsgrove’s leadoff batter in the home half of the sixth got hit with a 1-2 curveball before being bunted into scoring position. After another hit batter, Tyler Swineford delivered the game-winning hit, an RBI single to right field.

Upper Dublin’s Austin Dahl struck out the next batter and got a fly out to center field to keep it a one-run game.

Dahl got out of an even bigger jam in the fifth inning. Selinsgrove (22-2) loaded the bases with three straight singles before back-to-back walks tied the game, 7-7, with no outs. Dahl, a freshman, entered and kept it a tie game, recording three outs in four pitches. Second baseman Jared Levis caught a line drive to turn a double play before Dahl recorded a three-pitch strikeout to end the threat.

While Upper Dublin couldn’t rally to a win in the final inning, the District 1 champions showed their customary resolve by battling back from a 5-1 deficit to take a 7-5 lead.

“Earlier in the regular season we were down 8-0 against Quakertown,” Rizzo said, “and we ended up winning that game. We weren’t too worried about what the score is because we know we can do it.”

“We continued to go back to, ‘Let’s win this inning,'” Wall said of the message after falling behind 5-1. “We have to score. We have to get up on the board. We battled out a couple good at-bats and we just started to rally with the barrels and put balls hard in play. It was nice to see our bats come alive.”

In the top of the fourth inning, Brendan O’Brien scored on a wild pitch before Nick Lombardo singled and an error in the outfield allowed Dahl to race home and cut the deficit to 5-3.

In the fifth, Aidan McCarthy hit a two-run single to tie the game before Rizzo’s two-run base hit gave the Cardinals a 7-5 lead.

The Cardinals took a 1-0 lead in the top of the first inning. After Rizzo led off with a walk, Lombardo grounded out to move courtesy runner Austin Pendleton into scoring position. Leo Soriano’s groundout got UD on the scoreboard.

Selinsgrove responded with two runs in the second inning and three in the third to build a 5-1 advantage.

(4-1) Selinsgrove will face Archbishop Wood in the semifinals Monday.

“I said this when we won the district chip,” Rizzo said, “I’m still kind of taking everything in. It’s taking me a while to digest, but it’s amazing that we can go from not having a field because our high school got destroyed – it’s really amazing. There’s really not too many words to describe it besides it’s just a miracle. We’re all hardworking, dedicated people. If we don’t have a field, if we don’t have anything, we’re still going to win and that’s what we did.”

“It’s been amazing,” Wall said. “Our players’ attitude, approach, toughness and intensity has been fantastic. That’s all what got us here. Our ability to not let the moment get too big, stay within ourselves and battle is what got us here, whether it’s defensively or offensively. I’m just thankful for our boys and our coaches – Ken (Irwin) and Randy (Meehl) and the guys have done a fantastic job all season.”