While not playing, Henning makes his mark on Garnet Valley sidelines 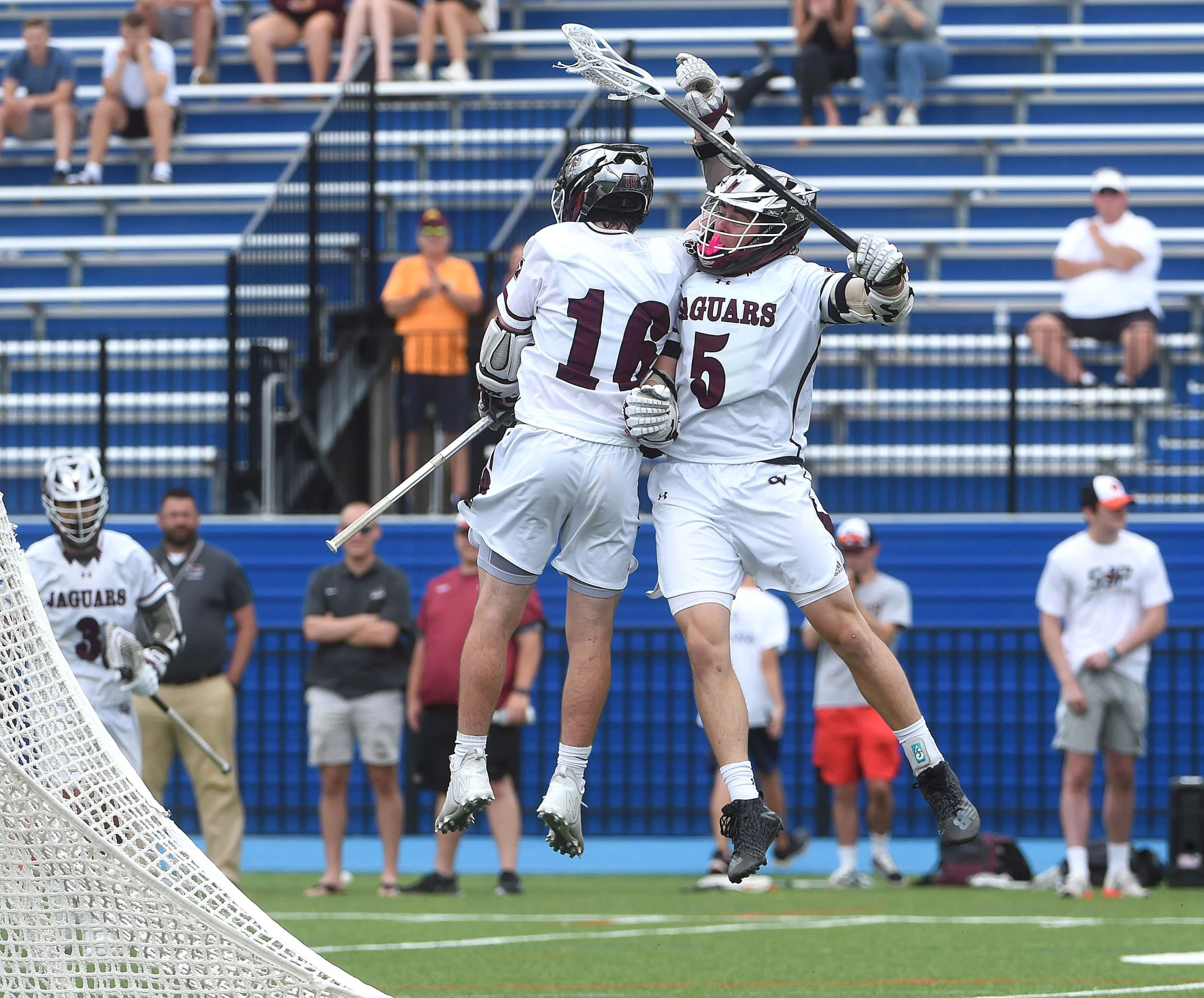 Garnet Valley's Luke Mingioni, left, celebrating with teammate Joey Halloran after a goal in the first half of Tuesday's state semifinal win over St. Joseph's Prep, is among the young midfielders stepping up in place of the injured Kris Henning, who has adopted a vital mentorship role on the Garnet Valley sideline. (Pete Bannan - MediaNews Group)

ELVERSON — Everything about the appearance of Kris Henning on the Garnet Valley sideline reads “coach.” He exhibits a locked-in focus on the game, the willingness to pull players aside and the tone to constructively share observations.

Everything fits the picture … until you see the brace enrobing his left leg, and until you ask Henning where he’d like to be on Saturday, when the Jaguars will play for a PIAA Class 3A championship against Central League foe Radnor at West Chester East (12 noon).

“I absolutely hate standing on the sidelines,” Henning said after a recent Class 3A state tournament victory for the Jaguars. “I’ve become accustomed to it. I just learned to take it one day at a time and hopefully there’s light at the end of the tunnel.”

Henning might be the best lacrosse player in Pennsylvania never to play a high school game. Well, that’s not entirely true. He’s played one, the opener this season, an overtime loss to St. Joseph’s Prep in which Henning scored a goal. But the junior midfielder re-injured his left knee, the third time he’s had an issue with that leg, wiping out the rest of his season almost before it started.

When the Jaguars met the Hawks Tuesday at Springfield in a PIAA Class 3A semifinal, Henning was on the sidelines, cheering on his team. It’s not where he wants to be. But of the alternatives, it’s become the best of the lot.

“It’s a great group of guys,” Henning said. “I love supporting them. As long as we keep winning, that’s all right.”

Henning’s absence speaks volumes about what the Jaguars have accomplished. Henning is a polished midfielder, with decent physical size at 5-10, a rocket shot, soft hands and playmaking ability. He impressed sufficiently with his club team, Big 4 HHH, to have committed to Penn State.

But the high school calendar has been a minefield. He had his freshman season, in which he was likely to be a contributor for the Jaguars, wiped out by COVID as he was recovering from a knee issue late the previous summer, though he was able to return for a relatively full club slate once the initial pandemic-related pauses ended. He got hurt in the spring of his sophomore and junior years, too, meaning his body of high school work is that solitary game.

Missing Henning has made Garnet Valley’s quest to make a first state final that much harder. On paper, an attack line led by seniors Max Busenkell and Joey Halloran, backed by a pair of Division I talents in Ryan Nealon (Holy Cross) and Henning makes for a daunting challenge.

But coach Frank Urso never got to see that squad in action. Most of the 2022 season has been devising ways to compensate for Henning’s absence. It’s only in states that District 1’s fifth place team has really put those pieces together, with underclassmen like Luke Mingioni and Colin Smith maturing at just the right time.

“They did really step up,” Henning said of the young middies. “They’ve been doing their job, helping Max, Ryan and Joey, the seniors. They’re really good athletes, and they’re filling good spots and they’re doing their job. They’re part of the reason we’ve been able to have so much success in the postseason so far.”

To Busenkell, who has led the attack with 162 points, it’s not a coincidence that Henning’s presence on the sidelines has correlated with his understudies’ improvement on the field.

“He’s really just a tremendous leader,” Busenkell said. “I couldn’t put myself in his shoes, what he’s gone through. But he doesn’t show it one bit. He’s always helping out the young guys, doing whatever he can so that when they get out on the field, they’re doing the most with their opportunities. We really couldn’t ask any more out of him. It’s amazing what he can do from the sidelines.

“It just shows how smart of a lacrosse guy he is. It’s a total shame we don’t get to see him on the field, but he’s doing his best to contribute to the team.”

After all Henning has been through, he’s grown accustomed to being a spectator. That’s not the same as enjoying it or being comfortable, he cautions, and it doesn’t diminish his hunger to get a long-awaited shot at an uninterrupted senior season.

But he’s also not letting his circumstances keep him from being a part of a historic first for the Jaguars program.

“I do feel a part of it, not in the same way I would on the field helping the team,” he said. “Obviously it’s hard. But I do still feel a part of the team, and it’s a great group of people to make a run with.”