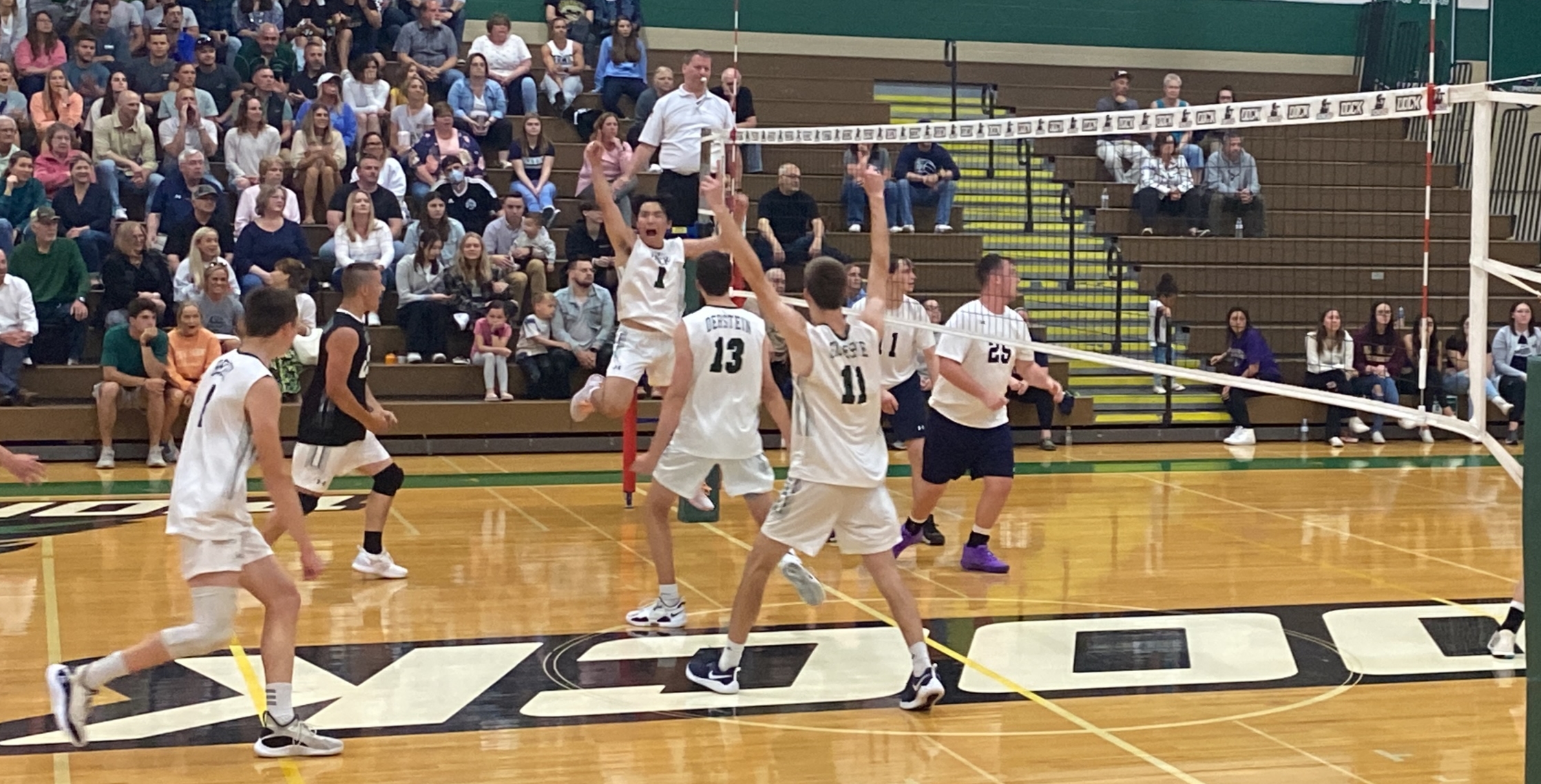 Dock Mennonite's Alex Yoo (1) and teammates celebrate after Yoo's kill in the third set against Berwick in their District 1/2/11 Class 2A semifinal on Tuesday, May 24, 2022. (Mike Cabrey/MediaNews Group)

TOWAMENCIN >> Dock boys volleyball senior Alex Yoo was hoping for a chance to switch out of his libero position and play in the front row Tuesday night.

And after the Pioneers decisively won the first two sets of the District 1/2/11 Class AA semifinal with visiting Berwick, Yoo got his opportunity.

“I actually asked him yesterday end of the practice, I was like ‘Coach, can I go in as an outside hitter if it’s like a total blowout, like last set?’” Yoo said. “And he’s like, ‘Maybe.’ So we kept them under 15 I think the first two sets so I give him the look and was like ‘Can I go in?’ and Mr. (Kirby) King was like ‘Change your jersey, you’re going in as outside hitter.”

Late in the third set, with Dock comfortably ahead, Lane Bergey sent a sent over to the left side to Yoo, who elevated and ripped a ball past a block and down in the middle for a kill and 24-10 lead.

BOYS #VOLLEYBALL: @dock_athletics’s Alex Yoo, who usually plays libero for the Pioneers, gets a kill in the third set vs. Berwick. pic.twitter.com/OEKzZWa6Ad

“There’s always a stereotype that liberos can never hit,” Yoo said. “And I would just practice hitting during practices and I saw that ball, I saw it coming, I was like there’s my chance, took it and swung as hard as I could and luckily it hit the block and it went down to (the court).

A Sean Gillespie kill on the next point wrapped things up as the top-seeded Pioneers advanced to the district final for the second straight season with a 3-0 (25-15, 25-10, 25-10) victory over the No. 4 Bulldogs.

Gillespie finished with 17 kills, four aces and a block while Bergey totaled 42 assists for the Pioneers, who never trailed in the match as they clinched a berth in the PIAA-2A tournament. Berwick, more than a 90-minute drive from Dock, pulled even just four times in the match – three times early in the opening set then 1-1 in the second.

“I was surprised that it wasn’t a little closer,” King said. “I thought it would be closer than this. Part of it is I think just the travel and everything for them was rather difficult which we know cause we had to do it last year. So it does make it difficult.”

Dock had to go up to Holy Redeemer in Wilkes-Barre in the last two district tournaments, falling to the Royals in both the 2019 quarterfinals and the 2021 final. Thursday, the Pioneers head to Catasauqua High School to face Southern Lehigh in the final at 5 p.m.

“It’ll be tough cause it’s district finals obviously, it’s top two teams in the district but I’m looking forward to it and super-pumped,” Yoo said. “I think we’ll take that, I think we’ll come back to Forty Foot Road with a district title for sure.”

The No. 7 Falcons are looking to pull off their third straight upset after knocking off No. 3 Blue Ridge 3-0. Dock is aiming to earn its first district title since winning District 1/11 in 2018.

“We haven’t won this combined district where District 1, 11 and 2 all come together for one tournament, we’ve never won that district title,” King said. “So we want it. We’re looking forward to a chance to get it.”

Tristan Blum added 13 kills while Anthony Bernardo collected 10 kills, 10 digs and a block for Dock, which has won all six sets it has played in districts, sweeping Forest City Region in the first round May 19.

The first set was tied 4-4 before the Pioneers took six straight points. Dock extended its advantage to nine twice before a 3-0 Berwick run had the margin to six at 17-11.

The Pioneers, however, answered with a three-point burst of their own to go up nine. From there, the closest the Bears could get was seven at 21-14.

BOYS #VOLLEYBALL: Tyler Derstein with a kill to finish @dock_athletics’s 25-10 win in set 2. Pioneers lead Berwick 2-0 in the District 1/2/11-2A semifinal. pic.twitter.com/dU4uJWcsC2

“Our one jump server was outstanding, Sean, and then the other guy mixes float and jump, Anthony, and he was hitting spots really well,” King said. “And so we had set the spots that we want to work on but then we don’t call it during the game, we let them pick. So we give them a couple choices and then they go for it and they did really well at executing what we asked.”

A six-point run gave Dock Mennonite an 8-2 lead in the second set with the Pioneer going up 14-4 to force a Berwick timeout. The margin dipped into single digits at 16-7 before a five-point Dock run made it 21-7 and the Pioneers rolled from there for a 25-10 win.

“Our team, when we meet a lower-level team we play at their level second set usually,” Yoo said. “Cause first set we kill them and the second set we just kind of like ‘Oh we’re going to win.’ We have that mentality but tonight it was different because we keep the momentum throughout the whole game. So I think tonight it was one of the best games we’ve ever had.”

BOYS #VOLLEYBALL: @dock_athletics with no trouble in 1st set vs. Berwick, Tristan Blum’s kill from the middle sealing a 25-15 win for a 1-0 lead in the match. pic.twitter.com/7qRRaSjNCQ

A 7-0 run had Dock up 10-1 in the third set with the hosts up 10 at 13-3 before three straight points from Berwick. The Bears were still down seven at 17-10 but the Pioneers pulled away with an 8-0 run. Yoo, getting his break from libero, set up match point with his kill with Gillespie putting down his final kill to send Dock to the final.

“Ever since I started playing volleyball I played libero cause I was short,” Yoo said. “I was always a short guy so I really saw an opportunity to play outside. But it was a special moment. It was my last year, so it was a great memory, last home game. It was crazy. I just loved the atmosphere.”