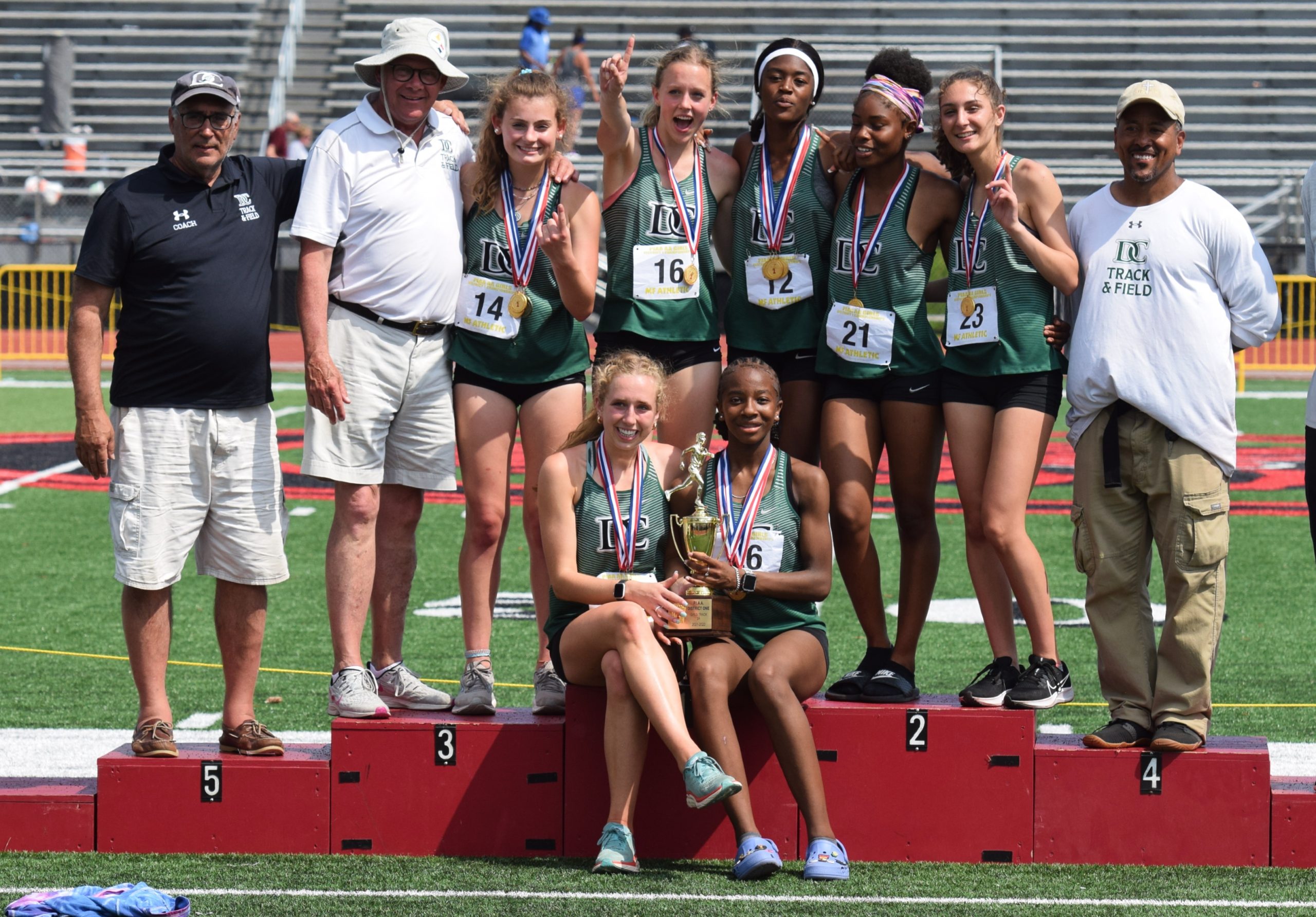 The Delco Christian girls' team poses with the district championship trophy after winning the 2A team title at the District 1 Track and Field Championships Saturday at Coatesville. (Austin Hertzog - MediaNews Group)

CALN TWP. — As soon as she came off the track following her leg of the 4 x 400-meter relay, Delco Christian’s Gabrielle Watson fell into the arms of teammate Ella Hines and began to cry.

They were certainly tears of joy.

“I was just so happy,” Watson said.

The win in the relay locked up the girls Class 2A team title at the District 1 Track & Field Championships for the Knights Saturday, the first in program history. It also validated Delco Christian’s team title in the recent Bicentennial League Championships.

“We wanted to back up that victory,” senior Sadayah Addy said. The Knights did so in convincing fashion, winning seven events to pile up 190 points to beat perennial champ Dock Mennonite by 41 points.

“I think a lot of people really pushed hard today and ran a lot of events,” Hines said. “They did it for each other. We really had the team in mind.”

Hines added the 3,200-meter title to the 1,600-meter crown she Friday. She teamed with Watson, Elizabeth Matty and Marielle Clayton for gold in the 4 x 400.

Addy won the high jump and triple jump and was on the winning 4 x 100-meter relay team with Clayton and Makiyah Keys. Evezi Omuyeh added the discus title to the shot put championship from the first day of competition. Hallie Keys claimed the javelin to give the Knights a clean sweep of Saturday’s field events.

Hines set the tone early on a hot and humid day at Coatesville High. She pulled away from Dock Mennonite’s Celeste Derstine in the final 300 meters to win the 3,200. The weather conditions played a role in her strategy.

“The plan was to start making my move on the sixth or seventh lap, but that’s when I was really feeling the heat,” Hines said. “I took the lead and lost it because I was feeling really hot and it’s tougher to lead in that kind of conditions. I kind of hoped for the best and waited a little bit longer to make my move. I felt like I had a fair amount left in me as far as speed.”

Omuyeh threw 113-4 to win the discus, a personal best by a foot. She did it on her last attempt. Addy set her second school record in as many days with a leap of 34-9 in the triple jump. She set the school mark in the long jump a day earlier at 17-8.

It all added up to a team title.

“We could not have done it without each other and without our coaches,” Hines said. “This year, our team has been dynamic. Being together has been incredible and that’s what we owe it to. We’re super close and there are a lot of leaders on the team. It’s just been an incredible season, an amazing way to end it.”