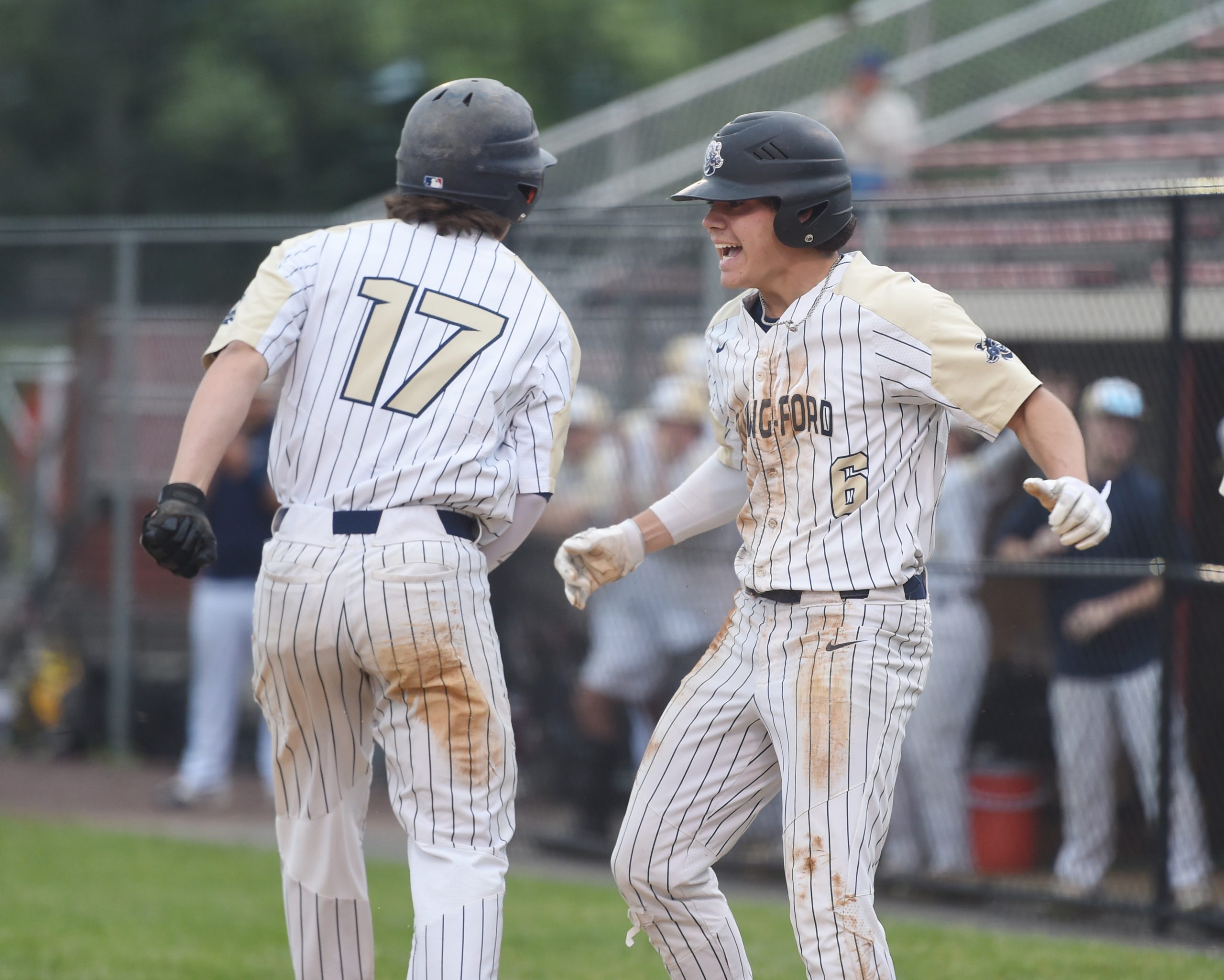 Spring-Ford’s Nick Flores (17) and Griffin Straface (6) celebrate near home plate after coming in to score on a first-inning single by Jake Books on Wednesday in a PAC Final Four game at Boyertown. (Owen McCue - MediaNews Group)

BOYERTOWN >> For the past few seasons, the Spring-Ford baseball program has had one constant thorn in its side — Phoenixville.

The Phantoms delivered the lone blemish on the Rams’ 2021 Pioneer Athletic Conference championship run. Then came a whooping from Phoenixville in a regular-season matchup earlier this spring.

Spring-Ford had another chance to pluck the pesky Phantoms in Wednesday’s PAC Final Four game at Boyertown.

“We were excited to get back at them,” Spring-Ford senior first baseman Jake Books said. “It’s been a rough two years against them. It just feels good to get them back.”

The Rams rode an impressive postseason debut from senior righthander Garrett Wible and some early offensive sparks to come up roses in a 5-1 victory over Phoenixville, breaking a four-game losing streak dating back to 2019.

The win sent Spring-Ford into Thursday’s championship game to defend its 2021 title against league regular-season champion Owen J. Roberts, a 3-0 winner over Perkiomen Valley earlier in the day.

Phoenixville senior starter Drew Kingsbury earned the win in two of the last three victories over the Rams, including the 2019 PAC title game.

He allowed just two hits in an 11-0 six-inning shutout earlier this season, but the Rams’ bats came ready to pounce Thursday night.

Spring-Ford pitcher Michael deHaan (19) gets congratulations from his teammates after recording the final out against Phoenixville on Wednesday in a PAC Final Four game at Boyertown. (Owen McCue – MediaNews Group)

The Rams collected nine hits in the first three innings to go up 4-0. They went up 5-1 and chased Kingsbury in the fourth before Phoenixville junior reliever Dylan Antonini (3.2 IP, 1 H, 0 R, 1 BB, 4 K) came in and shut them down the rest of the game.

“They came out swinging, they came out guns a-blazing,” Phoenixville coach Geoff Thomas said of Spring-Ford.

“Drew’s been my bulldog all year long. He didn’t have his ‘A’ stuff tonight but he battled.”

Straface was a catalyst for the Rams throughout the game, reaching base four times. He went 3-for-4 with two RBI. Books and senior third baseman Aydan McNelly also had a pair of hits.

“I feel like me getting on base, that brings a lot of energy,” Straface said.

DeJesus was the only one to come home, scoring on a chopper up the middle by junior Colin Bull. A 5-4-3 double play turned by McNelly and senior second baseman Grant Klemann in the second stranded Antonini. Wible used his curveball to get two groundouts and escape the fifth after Narke’s knock.

“I didn’t really have a lot of my stuff today, but I just threw strikes and let my defense help me out,” Wible said. “They made a lot of plays today, turned a couple double plays.”

Narke and junior shorstop Wade Carruthers had two hits apiece for Phoenixville, which left a total of nine runners on the game.

“I’m really proud of our guys,” Thomas said. “We left a lot of guys in scoring position and we didn’t have timely hits. Timely hits could have made a big difference. … This was a great tuneup for districts.”

With the Phantoms checked off the list, there is just one PAC squad the Rams haven’t taken down this season. They will get their chance Thursday night against the Wildcats with a PAC title on the line.

OJR carries a 17-game win streak into the contest, including two wins over Spring-Ford.

“We want our revenge,” Straface said.

NOTES >> Phoenixville is the lone PAC school to have a winning record over Spring-Ford since 2008, according to MaxPreps. … The Rams will be going for their eighth overall league title on Thursday and fourth since 2015.  … The Rams had eight different players tally hits, including an RBI single by Brian Korchok and a double by Klemann.