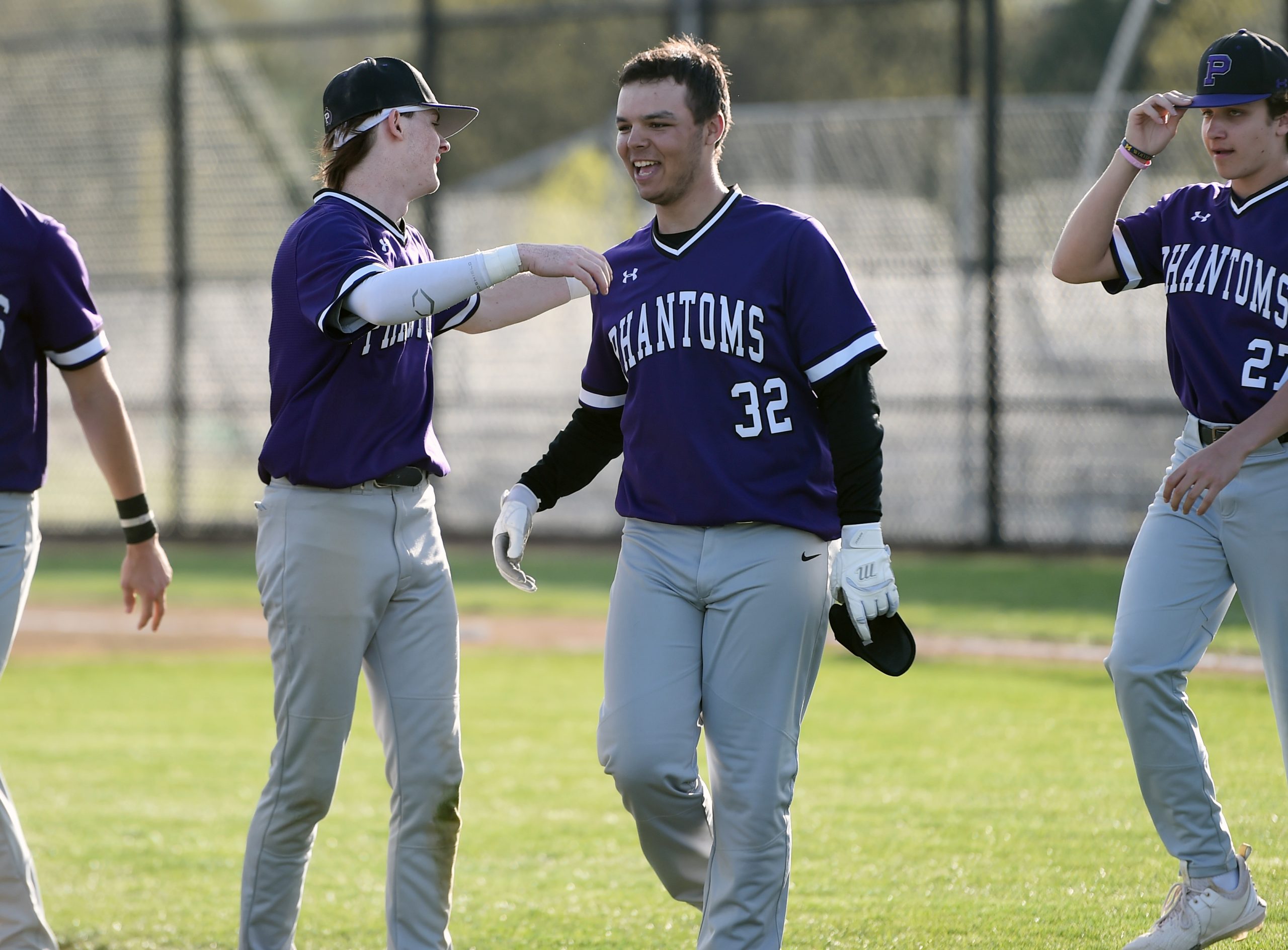 At the plate, Kingsbury returned the favor for Schwartz.

The pair of Phantoms pitchers combined for seven strong innings on the mound before Schwartz drove in Kingsbury with a two-out hit in the bottom of the seventh for a walk-off 4-3 win over Pottsgrove on Friday.

“We learned as a team we have the ability to come back in a situation when we need to,” Schwartz said. “A clutch situation like that where you have a tie game in the bottom of the seventh, I think we really learned that we don’t have to score runs early, we don’t have to shut a team out. We were able to come back and get the run support that we needed.”

The Phantoms (7-0 overall, 6-0 PAC, 5-0 Frontier) came in undefeated having outscored their opponents, 46-0, in their last four games.

They quickly had their first deficit of the season when Pottsgrove (4-4, 3-4, 3-3) struck first on a two-out solo homer from senior outfielder Yasir Gardner-Sizer (2-for-3, 2B, HR) in the top of the first for a 1-0 Falcons lead.

Phoenixville responded well to the unfamiliar position as Andy McMahon and Dylan Antonini tallied two-out hits in the bottom of the first to drive in a pair of runs and put Phoenixville ahead, 2-1.

“It was definitely good for the team to face adversity. Some of the wins before, we just really didn’t have the adrenaline,” Schwartz said. “I think it was a great experience for the team. I think it’s going to set up future wins in the season.”

Following Gardner-Sizer’s first-inning blast, Schwartz limited the Falcons to just one hit through the next three innings.

Pottsgrove lefty starter Jacob Slanker (3.1 IP, 3 ER, 2 BB, 2 K) was similarly effective after the first, keeping the Phantoms off the board until handing the ball to Nick Freese in the bottom of the fourth.

Freese nearly got the Falcons out of a jam with first and second, one out, but a dropped pop-up allowed a runner to advance to third and Phoenixville shortstop Wade Carruthers drove in a run with a two-out hit to give Phoenixville a 3-1 lead after four.

“Today our pitchers Jacob and Nick did exactly what they’re supposed to,” Pottsgrove manager Jamie Nash said. “That’s a good lineup they kept in check for the most part today, so I’m very happy with that. But defensively we’ve got a few things we’ve got to clean up and that’s been the story of the year. It’s one or two plays defensively that have for the most part hurt.”

Pottsgrove’s Yasir Gardner-Sizer (5) is greeted at the plate after his first-inning homer Friday against Phoenixville. (Owen McCue – MediaNews Group)

Pottsgrove finally got to Schwartz again in the top of the fifth when No. 8 hitter Bubba Pysher led off with a double and No. 9 hitter Shane Lutz followed with an RBI single. Lutz, who didn’t even try out for the team last season, has five hits in his last two games.

“One through nine in the order, we feel are all competent hitters,” Nash said. “There’s really no easy out, so the pitcher knows he has to work every batter. It’s a tribute to these kids who have worked hard, especially hitting in the offseason.

“Shane Lutz, this is his first year coming out, so I didn’t really know him and the past few weeks I’ve been giving him chances at the plate and he’s been taking advantage of it.”

Zach Tyson gave the Falcons a third straight hit to start the fifth, and walks of Gardner-Sizer (intentional) and Ryan Bramer tied the game 3-3, but Schwartz got a fly out to center field to strand the bases loaded.

He struck out 10 batters and allowed three runs on five hits and four walks in five innings.

The three runs allowed by Phoenixville on Friday were the most since giving up two in a 5-2 victory over Pottsgrove to start the season. The Phantoms have allowed one total run in their other five wins, somehow managing to continue the pitching dominance of last season (fewer than two runs allowed per game) despite losing three of their top four arms.

“I really wanted to give credit to coach (Geoff) Thomas,” said Schwartz, who tallied a handful of varsity innings in 2021. “What he’s done for pitchers, as a team in general, has been incredible. He’s getting the best out of us. He’s making us the best players we’re going to be for the rest of our lives.”

Freese stranded runners on second and third in the bottom of the fifth. Kingsbury came in for the Phantoms in the top of the sixth and struck out three batters. The two teams entered the final inning with the score tied 3-3.

In a matchup of one of the PAC’s top arms and one of the league’s top bats, Gardner-Sizer doubled off Kingsbury to the fence in center field with one out in the top of the seventh and advanced to third on a wild pitch.

Kingsbury, who struck out five in two innings, got a strikeout and pop up to strand him on third and keep the score tied.

“I definitely had to bear down there,” Kingsbury said. “I just brought myself together. I knew in a tie game that hit doesn’t really hurt me. Yeah, he’s the winning run, but I knew what I could do out there, so I just had to stay calm.”

Kingsbury thought he had a walk-off homer to lead off the bottom of the seventh, putting a charge to the left field fence. The shot stayed in the ballpark and he was held to a single and later advanced to second on a sacrifice bunt.

Freese retired Antonini for the second out of the inning, but Schwartz avoided extras, hitting a 2-1 pitch to the gap in left center just out of the reach of Gardner-Sizer to plate Kingsbury and start a celebration.

“I saw that it was in the gap. I was just hoping it was going to get down,” Schwartz said. “The centerfielder almost made a really great play. I’m just happy it worked out.”

“Avery saved me, put the bat on the ball and knocked me in,” Kingsbury added.

The Phantoms are the last team to win a PAC Final Four after the 2020 season was canceled due to COVID-19 and the league chose not to hold a postseason in 2021.

Kingsbury tossed five innings as a freshman in the 2019 title game and is hoping his Phantoms, who had an eye-opening 11-0 win over defending champion Spring-Ford last week, will be back there again this season.

“I’m so excited,” Kingsbury said. “I’m so glad they’re bringing it back this year. It’s been too long and I’m hype to (possibly) be there again.”

It will be an uphill battle for the Falcons to get back into the PAC playoff picture, but Pottsgrove has hopes of replicating its 2019 success at the District 1 level when it won the first district playoff game in program history.

“This group is very, very capable,” Nash said. “I’ve been here eight years and this is one of the best lineups I’ve had. It’s going to come down to pitching and defense.

NOTES >> Antonini and Carruthers both tallied two hits for Phoenixville. J.R. McMenamin doubled for the Falcons. … Gardner-Sizer’s first-inning homer was his third in four games. He had a very good junior campaign, but has taken his approach to the plate to another level this spring. “I’ve had Yasir now for three years and each year he’s evolved as a hitter. Last year, I wouldn’t say there were holes in his game, but there were some things that he certainly improved on. This year, it’s the complete package.”