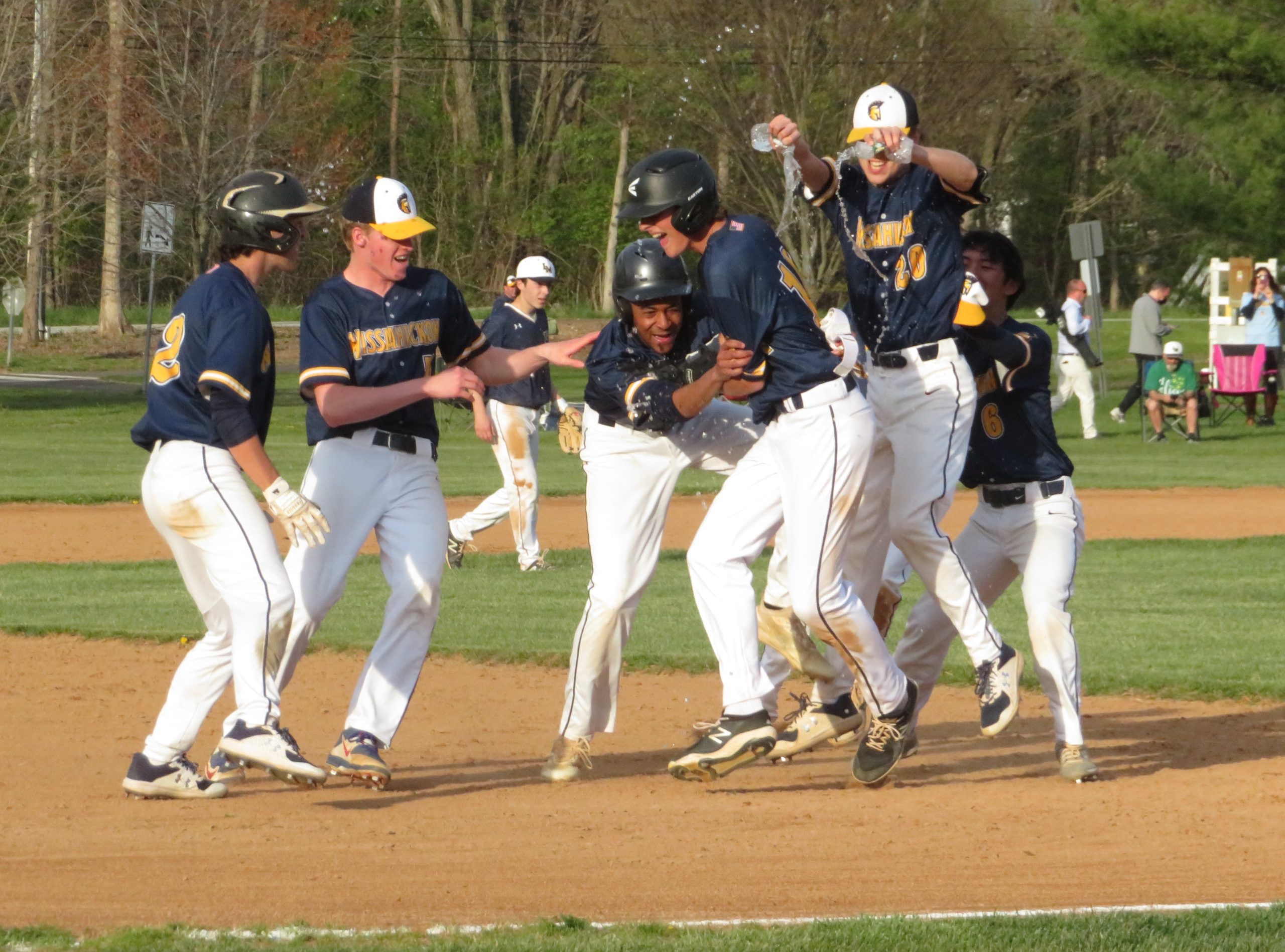 LOWER GWYNEDD >> Jack O’Donnell gave Wissahickon a one-run lead with an RBI double in the bottom of the sixth inning and scored on an error to make it a two-run game.

After Lower Moreland scored five runs in the top of the seventh, O’Donnell stepped to the plate trailing by one with runners on the corners and one out.

Finn Olszewski stole second to put the winning run in scoring position and O’Donnell delivered again, roping a single up the middle. Ben Junker scored from third to tie the game and Olszewski was right behind him to cap off a four-run bottom of the seventh and give the Trojans a 9-8 Suburban One League crossover win at Wissahickon High School.

“He was throwing fastballs every single pitch,” O’Donnell said. “I don’t think I got one off-speed. The first one I was a little late. I took a couple balls and then I timed it up, made sure to be on time, and it just happened. You saw the rest.”

“(O’Donnell) came in earlier in the week and had a clutch pinch-hit single for us,” Wiss coach Andy Noga said. “We know he’s been swinging a hot bat. We have to find a way to get his bat into the lineup and today he was able to DH because we had Reed (Bram pitching). He’s definitely the guy we want coming up in those spots. You can just see it when he steps into the box – he has a ton of confidence getting in there. It was good for him to do it one time, then do it again.”

Nate DeVincent got the Trojans (4-4, 4-3 SOL Liberty) seventh-inning rally started with a one-out double. He advanced to third on a wild pitch and scored on an error to make it an 8-6 game. Morgan Wilson singled before Olszewski hit into an error, scoring Josh Palutis to get Wiss within one.

Junker went to third as a pinch runner and Olszewski stole second in a first-and-third situation to set up O’Donnell’s walkoff single.

Wissahickon faced a 3-2 deficit going into the bottom of the sixth. Palutis hit a leadoff single and advanced to second on a Wilson sacrifice bunt.

“That’s just Morgan,” Noga said. “He’s a team guy. Any time we ask him to do anything he’s just going to say yes and do it. Plus, he’s one of our best bunters. He dropped down a perfect bunt and almost beat it out. We feel like we can play small-ball when we need to when the right guys are up. Morgan is a team-first guy so it was an easy decision to have Morgan bunt there.”

Olszewski followed with an RBI single to tie the game, 3-3, and advanced to second on the throw home. O’Donnell doubled down the left field line, scoring Olszewski and giving Wiss a 4-3 lead.

“When I was up at the plate I was just thinking have fun,” O’Donnell said. “I want to be in that spot. We prepped all offseason in the weight room, practices, to get to this point, so everybody on this team, including myself, is ready.”

Brayden Ryan pinch hit for Blake McClintic and grounded into an error, scoring O’Donnell and doubling the lead to 5-3.

Olszewski, O’Donnell and McClintic – the No. 7-8-9 hitters in the batting order – went a combined 6-for-10 with five RBI and four runs scored.

“Top of the lineup obviously gets it started,” O’Donnell said. “All of them up there, those big guys, they’ve been hitting great for us all year. It’s time for the bottom of the lineup – me, Olszewski, Blake – just to step up and I think this was a great team win, great hits from everybody in our lineup.”

“They showed so much heart,” Lower Moreland coach Mike Guido said. “The amount of fight they showed, I’m proud of them.”

Wissahickon took a 2-0 lead in the bottom of the second when O’Donnell hit an RBI single and Justin Miller hit a sacrifice fly.

The Lions tied the game, 2-2, in the top of the fourth. Mike Pennisi and Aidan Ricciardi had back-to-back one-out singles before a catcher’s interference negated an inning-ending double play and loaded the bases. Wenger worked a walk to make it 2-1 and Dorval grounded out to tie the game.