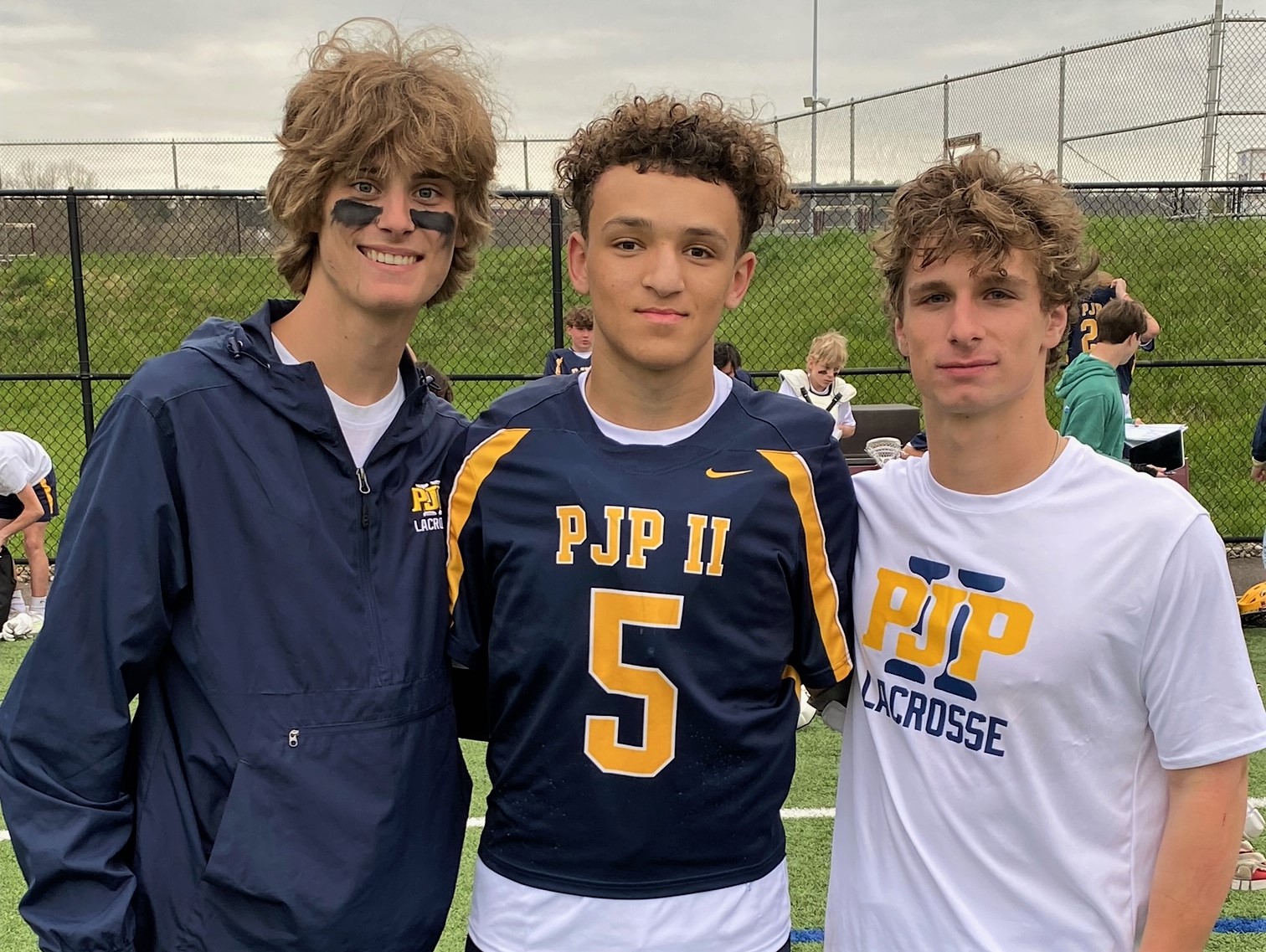 Pope John Paul II's Shane Flynn, Ian Young, and Luke Sykes
POTTSTOWN >> Pottsgrove and Pope John Paul II’s boys’ lacrosse programs came into 2022 as mirror images of one another.
Both Class 2A schools field rosters filled with young players, headed by coaches looking to develop a foothold in the increasingly competitive Pioneer Athletic Conference.
But the Golden Panthers separated themselves at Falcon Field on Thursday afternoon with an offensive barrage, firing 47 shots in total and connecting on enough of them to walk away with a 14-6 victory.
Ian Young tallied four times, while Shane Flynn and Luke Sykes contributed hat tricks in a breakout performance for the PJP offense.
“That’s how we want to play,” said Sykes, a senior headed to Neumann University. “Dodge, move the ball, look for open shots.”
The Golden Panthers found plenty of those, rallying out of an early 2-0 hole to put up 14 of the game’s next 15 scores. Young and Flynn had their hat tricks by the end of the third quarter, with Sykes joining in after Young’s fourth of the day.
“We’ve been more focused in practice this year, which starts with Luke and Connor (Gucwa, the other captain for PJP),” said coach Matt Bildstein. “It allows these younger guys like Ian to get comfortable and step up when they’re needed.
It’s the second league win for the Golden Panthers (4-4, 2-3 PAC) and also moves them closer to qualifying for a potential spot in the District One Class 2A playoffs.
A 9-0 run between the second and third quarters was the difference. PJP’s faceoff unit gained possession repeatedly, with Dillon Murphy leading the way with 11 wins out of 16 draws. Once they had the ball, the relentless offense made the possessions count.
Aside from the aforementioned trio, Eric Zadroga found the net twice for PJP. Gucwa and Luke Pallante rounded out the scoring.
PJP came into Thursday in ninth place for what will eventually be a eight-team field.
“It’s something we’re looking at,” said Sykes, a senior who hasn’t had an opportunity to play in Districts during his high school career. “It’s a major goal for me this season, definitely.”
“I’ve definitely got an eye on it,” admitted Bildstein. “But we haven’t discussed it much. We’re capable though.”
Pottsgrove dropped to 2-7 (0-4 PAC). The Falcons were led by two goals from Bruce Caffrey and Tyler Kaufman. The absence of Albany commit Max Neeson was apparent as PJP was able to dominate possession for long stretches.
Goalie Dom Sithens kept the Falcons competitive well into the contest, withstanding the PJP offensive avalanche with 19 stops.
“He did a great job,” said coach Stan Rotay. “We need to do better keeping shots off him, but he anchored the defense today.
“But we got out to an early lead — in the future, we need to be better at playing within ourselves and controlling what we can control.”
Shane Caffrey also scored for Pottsgrove.
Both squads are right back in action on Friday. PJP hosts the Central League’s Upper Darby, while Devon Prep travels to Pottsgrove for a nonleague contest.