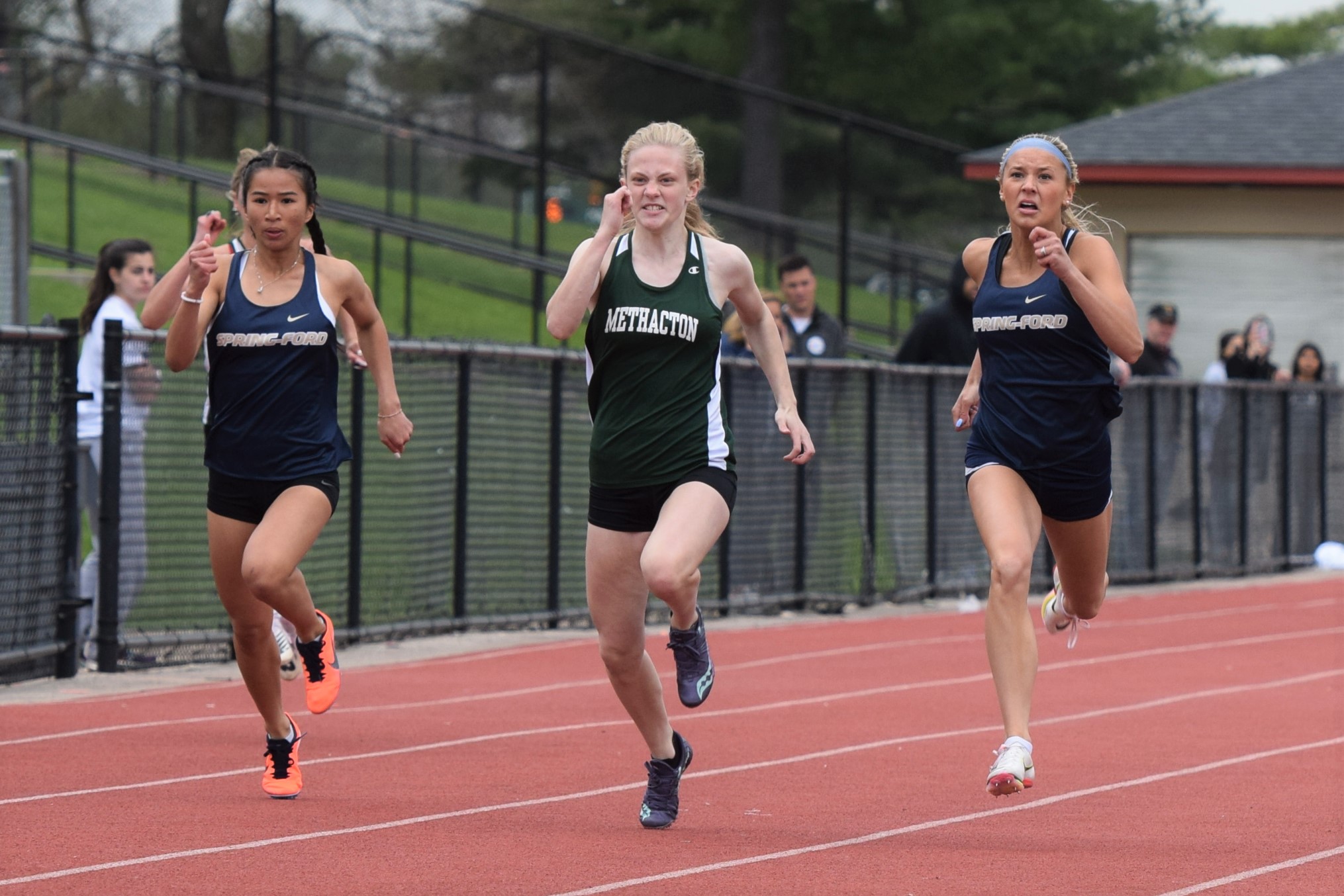 There are many things that make a track and field meet unique. For starters, the variety of disciplines, the diverse skillsets required.

Then there’s the scoreboard. Or rather the lack of one.

It makes for unsettled situations like the one that played out Thursday when Spring-Ford visited Methacton in a matchup of unbeaten Pioneer Athletic Conference favorites.

Exact margin aside, as late field events completed and results were entered, one thing was clear: the meet-ending 4×400 relays were important. Decisive even.

The four-lap finales settled the score Thursday as the Methacton girls took first to get the best of Spring-Ford, 79-71, minutes before the Spring-Ford boys stayed on course for a second straight perfect PAC season with a 77-73 verdict over Methacton.

The Methacton girls improved to 3-0 while the Spring-Ford girls dropped to 3-1.

The Spring-Ford boys, at 4-0, are a win away from going unbeaten in the PAC Liberty Division; Methacton fell to 2-1.

Thursday’s dual served as an appetizer for the team title battle that will be waged at the Pioneer Athletic Conference Championships, set for May 13-14 at Norristown.

Spring-Ford’s Alex Teufel, right, shouts as he hands off to Leonell Aguilar during the 4×400 relay Thursday at Methacton. (Austin Hertzog – MediaNews Group)

Spring-Ford’s Cole Turner leaps toward the pit during the long jump Thursday at Methacton. Turner won the event with a 20-0. (Austin Hertzog – MediaNews Group)

Shining seniors >> Senior Alex Teufel capped his meet-best points haul for the Ram boys by leading off the 4×400 relay before Leonell Aguilar, Justin Russell and Travell Wellons finished the job in 3:31.42. The Clemson commit in the pole vault won his specialty (11-0) and the discus (101-5) and took second in the shot put behind teammate Zach Zollers.

The football standout – he was Mercury All-Area Defensive Player of the Year in the fall – signed with Bloomsburg earlier this week. He’s hoping to put a proper bow on his high school sports career while extending his top jump marks.

“My goal has always been the same: to try to be the best I can be, be a champ,” Turner said. “My mentality has been a bit different (this year). I’m coming to the board angry but focused at the same time. I can control that anger, my emotions and that’s why I think I’m doing well right now. But I can do way better than what I’m doing.”

Spring-Ford coach Danielle Stauffer lauded Turner’s leadership for a team that is now the favorite in the PAC after improving to 3-0.

“When I was freshman and sophomore, I knew that the seniors really cared about us. They wanted us to get better,” Turner said. “I want everybody to be better, I want everyone to be the champ. I want them to be better than me. I hope to push them to a higher level because I know they can do even better.”

“I was not expecting to do that,” Willen said of his 200 time. “I was thinking a nice 22.10, something like that. I only did two events; my last meet I had three events before the 200 and I ran the same time I’d been running. But 21.87 I was not expecting at all, especially with this wind and the rain. It was out of the blue.”

Willen placed seventh in the 200 at the Pa. indoor championships in the winter and went to the New Balance Indoor Nationals. That success informs his goals this spring.

“I already went to indoor nationals and I think I can do that again in outdoor. I’m right there,” Willen said. “New Balance (qualifying time is around) 21.74. I can do that. It’d be great to go again.”

The New Balance Outdoor Nationals will be held at the University of Pennsylvania’s Franklin Field on June 16-19.

Senior Coco Dunham has been a mainstay of the Methacton girls team in recent years and is their lone returning PIAA qualifier (17th in the triple jump in 2021).

Dunham won the triple jump Thursday with a 35-3, but was quick to pass the credit for Thursday’s win.

“We have a lot of young talent,” she said. “A lot of the sophomores, the juniors, they do their best and I see it everyday. Their talent is amazing and it’s crazy to see how they improve everyday.

“They carry most of our team right now – the sophomores are really it right now.”

Dunham, who also finished second in the discus behind teammate Kirsten O’Brien (90-9), is pushing for a return to the PIAA Championships but has some challenges to work through.

“I haven’t been feeling my best and I’m going through a little mental block, but I’m trying to push past it and keep moving,” she said. “I’m really trying to make it back to states and do better this year.

“Last year was rough. I wasn’t mentally prepared for where I was at and I feel like now that I’m older I am ready to be in a competition where there are higher stakes.”

Duel of the day >> Arguably the hottest competition of the day was between Methacton’s Mellow and Spring-Ford senior Kaleigh Hudson.

Hudson has been a sprints standout since she was a freshman. She is a returning PIAA qualifier in the 200 and is headed to the University of North Carolina-Wilmington next year to compete in track and field.

Her goal this spring is to expand her event list at the state championships this spring.

Mokonchu ran a 58.45 in the 400 meters – a top 10 time in Pa. – and eased to the high jump win clearing 5-4. She’s the top high jumper in the state with a 5-9 personal best achieved at the Perkiomen Valley invitational two weeks ago.

Spring-Ford’s Justin Russell, near, receives the baton from Leonell Aguilar during the 4×400 relay Thursday at Methacton. (Austin Hertzog – MediaNews Group)

The Reporter/Times Herald/Montgomery Media Local Roundup (April 21): Methacton’s Christian does it all in win over Norristown
Aggressive attack pays off for Pope John Paul II in 14-6 win over Pottsgrove