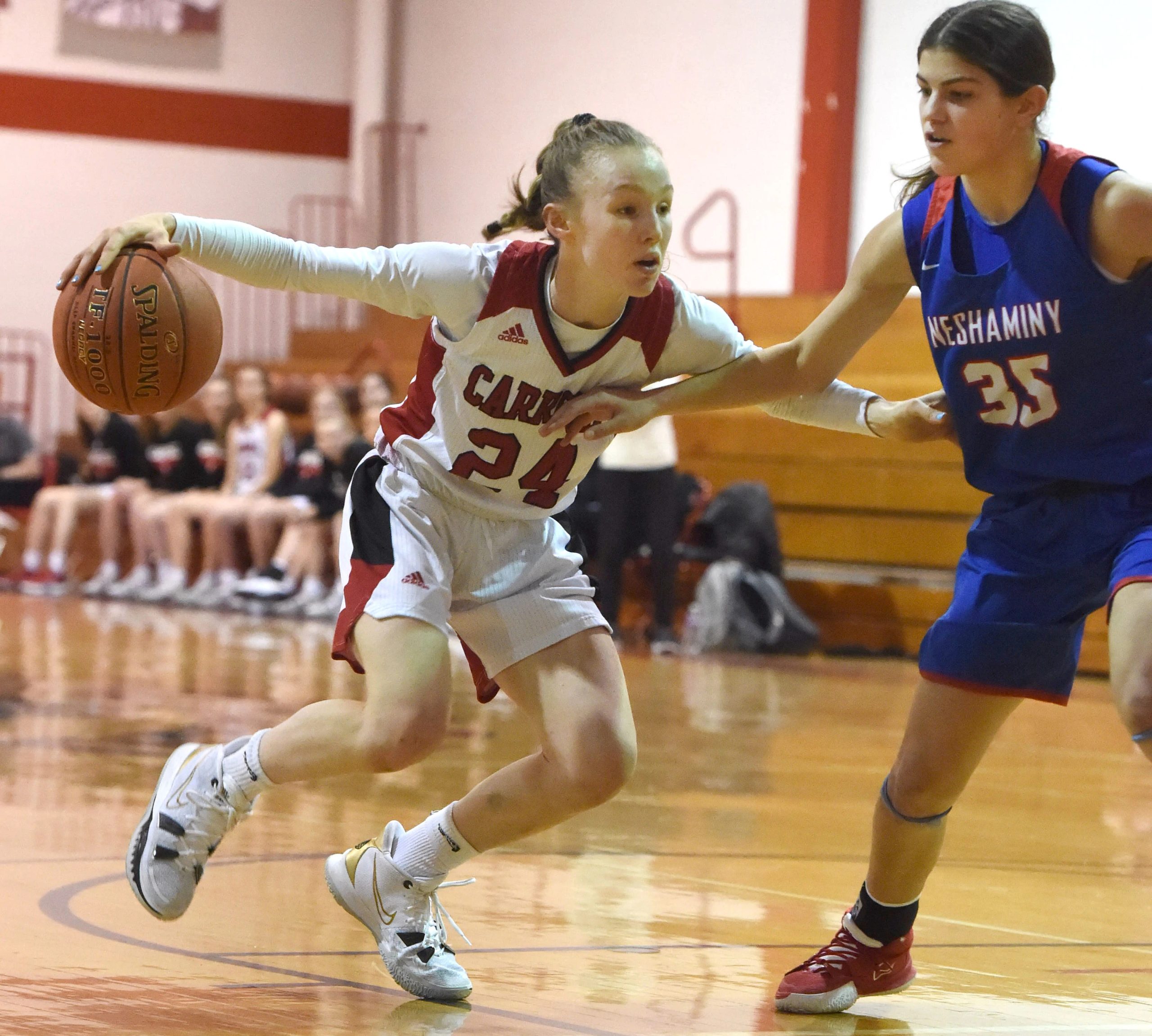 In addition to Daily Times Player of the Year Maggie Doogan of Cardinal O’Hara, the All-Delco team includes:

Grace O’Neill, Archbishop Carroll: The senior guard and two-time All-Delco was one of the best floor generals in the area. She was a starter since her freshman year and during her career helped the Patriots advance to a pair of Catholic League finals and a PIAA Class 6A final. The Drexel recruit guided the Patriots to a perfect record in the Catholic League regular season and a trip to the second round of the Class 6A tournament. O’Neill scored 26 points, including the 1,000th of her career, in a win over Germantown Academy Jan. 24. A four-time All-Catholic League selectee, O’Neill averaged 13.3 points, 2.5 assists and two steals per game. She made 44 3-point field goals and shot 72.7 percent from the free-throw line

Taylor Wilson, Archbishop Carroll: The junior forward had a breakout season for the Patriots. She is an outstanding low-post player who controls the paint, but has the versatility to play outside and hit the long shot. Wilson’s improvement inside the paint was a huge reason for Carroll’s 21-win season. An All-Catholic League selection, Wilson was the fourth-highest scorer in the county, averaging 14.5 points per game. Her 29 points against Lansdale Catholic helped Carroll clinch an undefeated league record in the regular season.

Molly Rullo, Cardinal O’Hara: The freshman was an integral part of O’Hara’s journey to a second consecutive PIAA Class 5A championship. She was a starter from the first day and will be one of the top high schools players in the state for years to come. Rullo joins a rare class of freshman All-Delcos, including legendary O’Hara alumna Kristen Clement, who was a four-time Daily Times Player of the Year. Rullo was an excellent outside shooter and defender, who could score in the paint and run the break with a veteran’s poise. She was superb in all of the Lions’ big games, including an 11-point, eight-rebound performance in the win over Archbishop Carroll for the Catholic League championship and a game-high 17 points against Mechanicsburg in the PIAA semifinals. Rullo’s production essentially exceeded the void left by two starters, All-Delcos Amaris Baker and Siobhan Boylan, who graduated last spring. Rullo averaged 10.5 points and five rebounds per game while shooting 40 percent from 3-point distance.

Sydni Scott, Cardinal O’Hara: The senior guard and three-time All-Delco was a mainstay in coach Chrissie Doogan’s lineup all four seasons. Since the beginning of her freshman year, Scott was a dynamic combo guard who could lead with her offense or defense. If she struggled in one area of her game, Scott always found other ways to make an impact. A four-time All-Catholic League selection, Scott reached 1,000 points this season while helping the Lions captured the Catholic League title and PIAA Class 5A championship for a second year in a row.  She made other players better due to her ability to facilitate and find the open shooter (Rullo, for instance, benefited greatly from Scott’s savvy on the court). Her excellent defense sparked the Lions all year long. The Marshall University commit averaged 10.5 points, four rebounds and four assists per game.

Maeve McErlane, Notre Dame: The senior guard is a three-time All-Delco selection. For the last three seasons McErlane has been one of area’s most talented and productive players, a tremendously gifted combo guard who does it all. McErlane scored her 1,000th point and was named Inter-Ac League MVP and recipient of the Markward Club Player of the Year award. She averaged 17.8 points, five rebounds, 2.9 assists and 2.3 steals per game for a 15-win Irish team. A season-ending injury kept her out of action in the final weeks of the season, but McErlane nonetheless garnered plenty of consideration for Daily Times Player of the Year honors. She will continue her basketball career at DePaul.