All-Delco Girls Basketball Player of the Year: Everything Maggie Doogan and O’Hara worked for … ‘just kind of happened’ 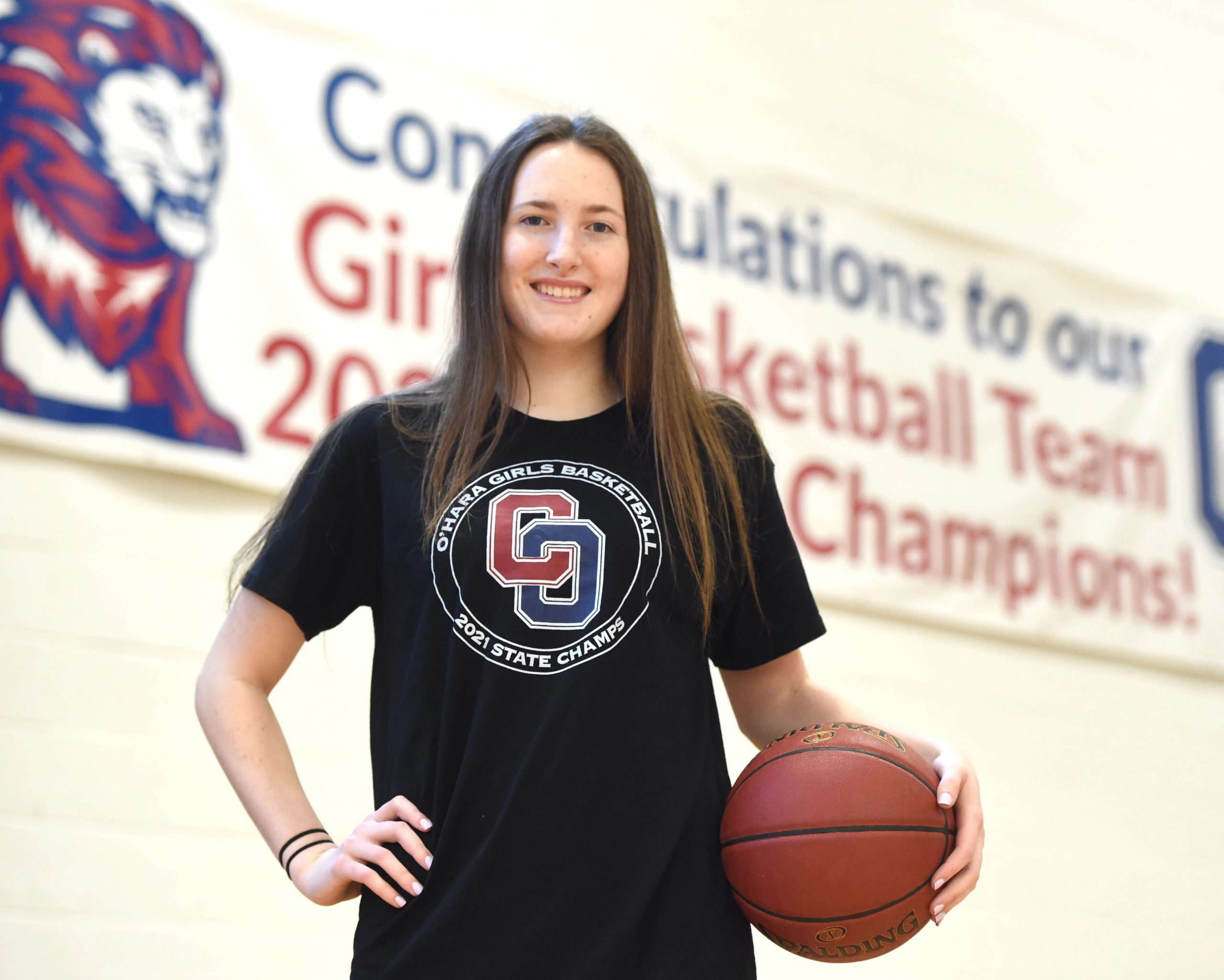 In being named Daily Times Player of the Year for the second straight year, O'Hara's Maggie Doogan led her team to Philadelphia Catholic League and PIAA Class 5A championships. (Pete Bannan/Media News Group)

MARPLE — Maggie Doogan felt an enormous sense of pride and gratitude as she stood inside Cardinal O’Hara’s gym for one of the final times as a high school athlete.

There she was before a large banner acknowledging the Lions’ 2021 PIAA Class 5A championship. One day soon, it will be joined by a second commemorating O’Hara’s 2022 successes.

Doogan did everything she set out to do her senior season. Last year’s Daily Times Player of the Year was the leader of arguably the greatest O’Hara girls basketball teams of this century. Behind her excellent play and veteran stewardship, the Lions checked off Doogan’s No. 1 priority – winning the Philadelphia Catholic League title. It was the team’s first crown since she has been at the school, playing under fourth-year coach (and mom) Chrissie Doogan.

Maggie Doogan of Cardinal O’Hara shoots against Chartiers Valley in the Class 5A PIAA girls final at the Giant Center Friday. Mark Palczewski – For MediaNews Group

“The PCL is something we had to do this year,” Doogan said. “Especially after coming close last year but falling short. That really made this season so special.”

No one doubted what would happen next for Doogan and the Lions. They dominated in the state tournament, winning all five games by a margin of 23.8 points. And for the second year in a row, they traveled to Hershey to destroy Chartiers Valley, 42-19, to capture the team’s second straight PIAA Class 5A title.

Not a bad way to script your senior year.

“Everything we hoped for just kind of happened for us,” Doogan said. “We worked really hard to get it.”

Doogan is now a two-time Daily Times Player of the Year. Her mom was a two-time honoree in the 1990s. Maggie is the ninth player in county history to win the award multiple times. O’Hara alumna Hannah Nihill was the last to do it in 2017 and 2018.

Scott and McErlane are three-time All-Delco selections. O’Neill is on the first team for a second time.

As she stood in the empty gymnasium, Doogan could appreciate one thing in particular: the silence.

“A quiet gym is my favorite,” the versatile, 6-2 forward said. “Coming in when nobody else is here, getting shots in and working hard, it’s always been something I look forward to. The big crowds are awesome, and we’ve played in some close games here, but I think the quiet gym is what I love most. You have it all to yourself.”

Doogan’s personal milestone of reaching 1,000 career points came away from the confines of her home floor. It happened at Conwell-Egan, when she scored her 17th and final point in the Lions’ 55-48 conquest of Archbishop Wood in the Catholic League semifinals.

If someone had asked her what was the bigger deal at the time, beating reigning league champ Wood for a second time this season or scoring her 1,000th point, Doogan would say the former without hesitation.

Conquering Wood at home the first time in January lifted the proverbial weight off the Lions’ shoulders (Wood defeated O’Hara for the title in 2021). Doogan went for 19 points that night. But what followed the Wood victory was a dreadful one-sided loss at Archbishop Carroll the very next week, the rude awakening the Lions needed.

“Beating Wood here (in the regular season) kind of boosted our confidence a little bit,” she said. “We were riding high a little bit and then Carroll kind of brought us down. It’s what we needed to keep pushing through. After that loss to Carroll, it was like, all right, they played better and tougher and stronger than us. We know we’re better than them, and we have the ability to beat them, but we have to go out and play our game. And I think that’s what we did in the championship.”

In that rematch, Doogan scored 18 points for the Lions to a 55-30 decision over Carroll at the Palestra on Feb. 28.

The Lions overcame adversity after a paperwork snafu regarding a transfer player threatened to keep them out of the state tournament altogether. They were stripped of the majority of their wins as well as their District 12 championship. They only qualified for states as the third seed out of the district after a Philadelphia Public League team opted not to participate in the tournament.

The outside noise emboldened Doogan and the Lions.

“I think our team did a really good job of handling it. We didn’t fall apart,” she said. “We didn’t blame anybody because it was no one’s fault. We stuck together. I think it actually made us stronger as a team. You know, we went out and said we have a (championship) to defend. It was kind of just like, go out and play for O’Hara because everyone was against us at that point.”

Doogan averaged 16 points per game her senior year, good for third in Delco. She also posted averages of seven rebounds and three assists.

Shortly after she graduates, Doogan will head to the University of Richmond to begin her college career. From out of state, she’ll root for a new generation of Lions. She can’t wait to see her mom coaching her sister, Catie, who is a sixth grader and seems to be a future basketball star.

“I can kind of see my younger self in her a little bit,” Maggie said. “I think she’ll be like me and start to peak in high school and grow to be a really good player.”