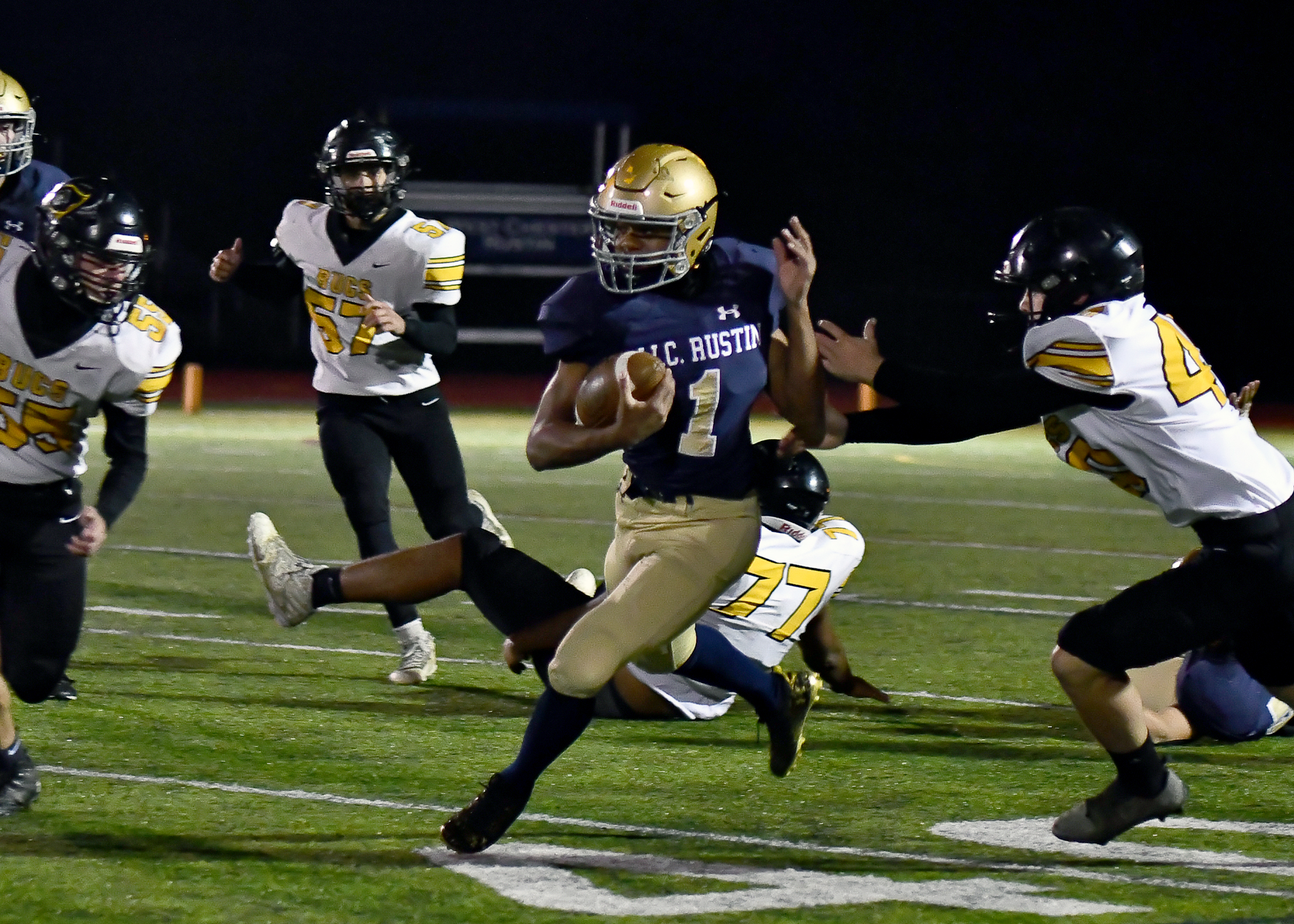 Sometimes in sports a particular athlete has a memorable season, one that observers will remember fondly long after the events occurred, blazed into their memories because of the spectacular nature of the exploits.

This season, West Chester Rustin senior running back Dayshawn Jacobs had a memorable and historic season.

It is for these lofty accomplishments that Jacobs is the Daily Local News Football All-Area Player of the Year.

“It was a great experience playing with my friends on the team and they pushed me to get better, “ Jacobs said. “We were a total team and my offensive line did a great job up front making all those yards possible. Those guys work very hard to open things up for me and I am thankful for that.”

Rustin finished with an 11-2 record and one of the teams Jacobs and the Golden Knights defeated during the regular season was Great Valley. Jacobs left a lasting impression on Patriots head coach Jeff Martin.

“Even if you defend Jacobs perfectly and all of your players are in the right position to make a play he is still a threat to beat you,” Martin said. “What I was most impressed with was he wasn’t necessarily a big running back, but he ran very hard. He is a complete back, laterally quick with breakaway speed, power and the ability to catch the ball. West Chester Rustin has had many exceptional backs but he certainly stands out as one of, if not the best they have had which is saying a lot.”

West Chester Rustin has had quite a few exceptional running backs like Rondel White and Terry Loper to name just two, but head coach Mike St. Clair had glowing praise for his all-purpose back.

“Dayshawn is what West Chester Rustin football is all about,” St.Clair said. “He is a local kid playing for his local high school with his friends he grew up with. He is a leader on the field, in the weight room and in the locker room. He is the Energizer bunny, he keeps on running. “He is a great kid to teach and coach. West Chester Rustin High School will miss him. I will miss him.”

Jacobs is still unsure of his college plans, but he said he will look back at his years as a Golden Knight with fondness.

“I am probably going to be playing Division 2 football, but i don’t know where yet,” Jacobs said. “I really had good experiences at Rustin with the coaches and all the players. we were a family and we accomplished a lot fo great things in my four years.”

That they did and Dayshawn Jacobs was front and center in all the lofty accomplishments the Golden Knights achieved. In a school known for incredible seasons by running backs, Jacobs will stand out as a shining star that made records and helped his team win a ton of games. He is truly what Rustin football is all about.