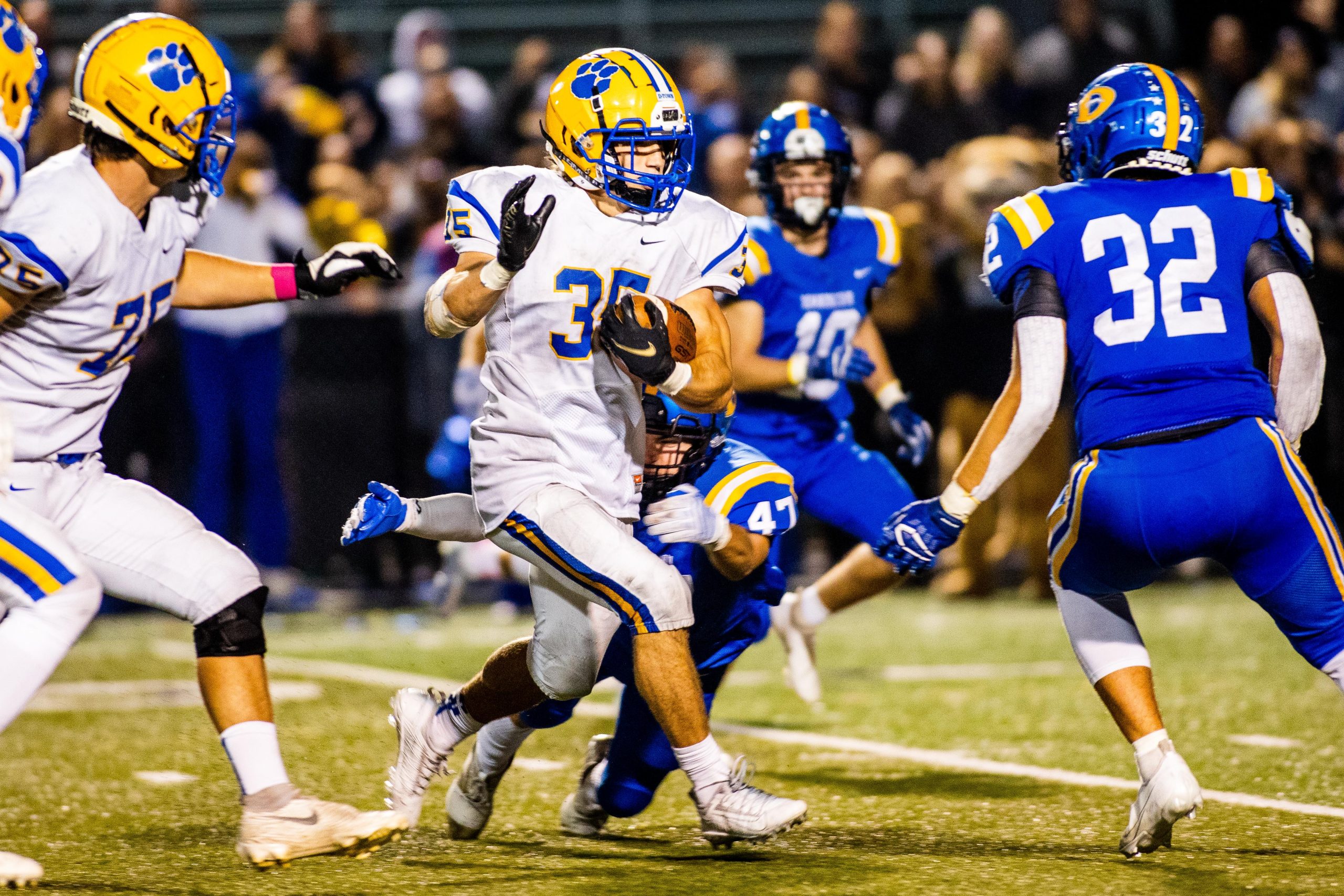 Set Chester County single-season records for rushing yards (2,741) and touchdowns (43), while leading the Golden Knights to the District 1-5A final.

RB- Bo Horvath, Downingtown East, Jr.
The top rusher in the Ches-Mont National, Horvath chewed up 1,741 yards and 14 TDs on the ground.

WR- Pete Detwiler, Conestoga, Sr.
Was tops in the area with 833 receiving yards, catching 46 passes, 11 for TDs, and added 296 yards and seven TDs on the ground.

WR- Colin McGrory, Bishop Shanahan, Sr.
His 51 receptions and 15 TDs were the most in the area, totaling 818 receiving yards and 414 rush yards.

OL- Cole Deery, Malvern Prep, Sr.
Voted the Inter-Ac League MVP, was dominant on both sides and will head to the University of Maryland.

OL- Kyle Kacmar, Downingtown East, Sr.
Another in a long line of powerful Cougar linemen, Kacmar led East to the fourth-best running game in the area.

OL- Oscar Ortega, Coatesville, Sr.
The Red Raiders had their best run game in a long time, averaging 268.8 yards per game, and Ortega was a big reason why.

OL- Jack Tuel, Unionville, Sr.
The Longhorns averaged the third-highest rush yards per game (228) in the area, thanks in large part to Tuel.

K- Jake Reid, Malvern Prep, Sr.
Was a touchback machine who made 26 of 28 point after attempts and also drilled eight field goals.

DL- Dylan Jones, Bishop Shanahan, Sr.
The Eagles had the top-ranked defense in the area, and it started in the middle, where Jones demanded double teams.

DL- Ryan Massey, Coatesville, Sr.
Stepped up and became the most-reliable lineman for a defense that peaked down the stretch.

LB- Nolan O’Hara, Coatesville, Sr.
An instinctive leader for the Red Raiders, O’Hara averaged nearly 10 tackles per game and picked off one pass.

LB- Ryan Davis, Malvern Prep, Sr.
A top linebacker in the Inter-Ac, Davis led the top-scoring defense in the area and had two interceptions.

LB- Will Mahmud, Downingtown West, Sr.
A cerebral three-year starter, Mahmud had a knack for being in the right spot, and had a pair of interceptions.

LB- Brandon Choi, Bishop Shanahan, Sr.
Returned from an early-season injury as the inspirational leader of the defense that carried the District 1-4A champs.

DB- D’Angelo Stocker, Malvern Prep, Sr.
A speedster and threat on both sides of the ball, Stocker is headed to the University of Richmond.

DB- LeBron Bessick, Coatesville, Sr.
A playmaker in every facet of the game, Bessick had two interceptions and returned four punts for TDs.

DB- Daimon Jacobs, West Chester Rustin, Jr.
The hard-hitting safety also led the area with six interceptions as the anchor of one of the top defenses around.

Coach of the Year
Paul Meyers — Bishop Shanahan
A head coach that that gets the most out of his players and commands the respect of those players is going to be a successful head coach. Four years ago head football coach Paul Meyers welcomed a talented freshman class to Bishop Shanahan.

All that class did was win two District 1 4A titles, and this year the Eagles advanced to the PIAA Eastern Final, won the first two state games in school history and finished with an 11-4 record, a school record for most wins in a season.

It is for reaching those heights that Meyers is the Daily Local News Football All-Area Coach of the Year.

The 2021 version of Bishop Shanahan football put them on the map in the 4A classification and Meyers, who has been head coach since the Eagles started up football in 2001 has been a talented mentor and head coach to his teams. This team made history and Meyers was at the forefront of those records.