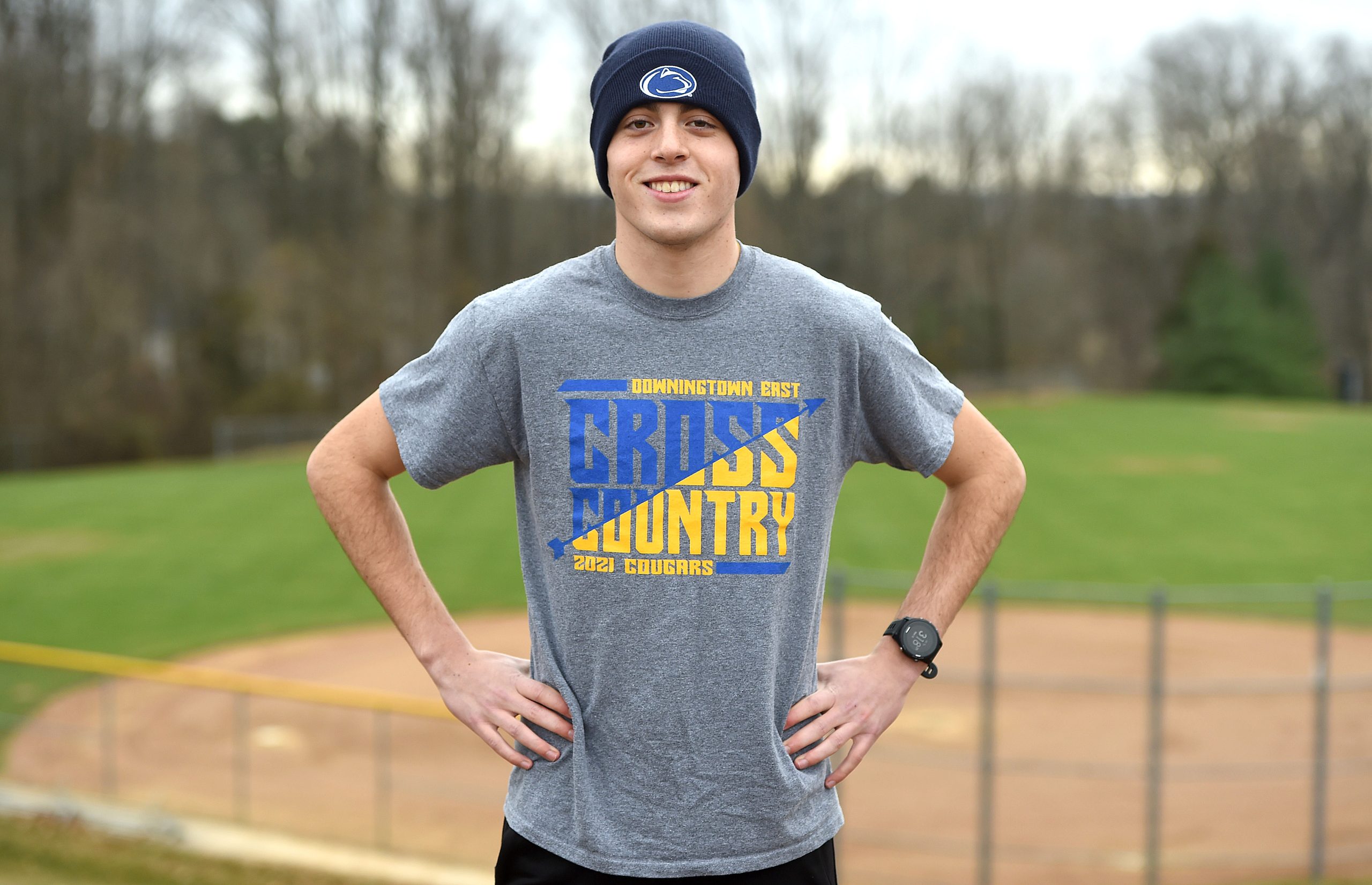 Downingtown East senior Caiden Leen, the 2021 Daily Local News All-Area Boys Cross Country Runner of the Year, saved his best performance of the fall season for last, as he finished sixth in the PIAA 3A cross country state championships and helped the Cougar boys achieve a third-place team finish.
“At the start of our summer pre-season training, Coach [Austin] Tobelmann sat us down and discussed potential goals, and our top goal, if we did everything right, was for our team to finish in the top three at States,” said Leen. “Achieving this goal was like nothing else because we had been working on it for so long. I’m so proud of how hard we all worked and what we achieved this season as a team.”
On an individual level, Leen was the top Chester County finisher in the boys’ 3A race, five places behind winner C J Singleton of Butler (15:52.9). Leen and teammate Brendan Flynn brought home the first individual medals from the PIAA state meet in Downingtown East boys’ cross country history.
“It was my best race of the season,” said Leen, who was the Cougars’ Most Valuable Player this fall. “I have to thank Coach Tobelmann for preparing me and my teammates perfectly for States, both physically and mentally.”
What made it even sweeter was that Leen bounced back from a 2020 cross country season that was limited, and frustrating for many area runners due to COVID.
“Last fall [in 2020], our team finished second at Districts, which in a normal season would have granted us a spot at states, but due to COVID, only one team got to make it to States,” said Leen. “And, I got Lyme disease at the end of the season and wasn’t able to run as fast as I would’ve liked.
“I had Lyme disease for most of the cross country season, but I didn’t get diagnosed until the post-season. For a while I thought I was feeling extra-fatigued due to over working myself. Fortunately I was able to fully recover after taking a course of antibiotics over my break between cross country and winter.”
Last spring, Leen had a stellar track season, finishing 10th in the boys 1600 meter run at States (4:21.09), and placing fifth in the 1600 at Districts with a mark of 4:20.62.
“After running fast in track last spring, I knew that if I trained hard, I could do really well in cross country this season,” said Leen. “Our team was also in a perfect place to do well, which motivated me even more to work harder. I would not have done as well as I did if I didn’t have amazing teammates who supported me and worked hard by my side.”
This fall, Leen finished third at Districts, third at the Ches-Mont Championships, and earned second team all-state honors.
Throughout the 2021 cross country season, Leen worked on improving his mindset.
“In my junior year I put a lot of unnecessary pressure on myself to perform, and it ended up having a negative impact on my training and races because I would get really anxious,” said Leen. “This year I really focused on trying to get back to my routes with running. I run because I love it – I love working hard at it, and I love showing up to practice with my teammates. It’s nothing more than that. When I toed the line at all my races this year, I wasn’t extremely nervous, I was ready to just go out there and do what I loved, regardless of the outcome.”
Tobelmann is impressed with Leen’s mental approach.
“Caiden he has a high running IQ, a passionate desire to better himself each day, and a fierce competitiveness that drives him to want to win whether it’s on the cross country course or over a board game,” said Tobelmann.
“Physically, Caiden is an incredibly strong runner which is crucial on the cross country course. This gives him the capability of running in the lead pack in a fast race, or on a more tactical course, he can sit back and close hard in the last mile. This shows in his range on the track as well, where Caiden has the ability to compete with the best in any event that is 400 meters or longer.
“Caiden once told me, ‘There are no such thing as limits.’ and I’m excited to see where this attitude takes him in the future.” Next fall, Leen is headed for Penn State, where he will run cross country and track. Currently, he attends Downingtown STEM Academy, where his favorite course is physics.
Leen took up the sport of cross country four years ago.
“In the fall of 8th grade, I was overweight and wanted to stay in shape, so I decided to try cross country because I figured I wasn’t good enough to make the middle school soccer team,” said Leen. “I ended up being pretty good, and I really liked the sport, so I decided to do it in high school.”
Leen credits Tobelmann and Flynn as his best cross country mentors.
“The most influential person in my running career is Coach Tobelmann – not only did he supply me with the tools to become a better runner, but he helped, and continues to help, me grow as a person,” said Leen. “He taught me the importance of pursuing things that we love and how to never give up on our dreams in face of a setback.
“My training partner and best friend Brendan Flynn also has had a large impact on my running career. Since freshman year he has pushed and supported me to be the best version of myself in running and everyday life, and for this, I am forever grateful for.”

Fun facts – Caiden Leen
Favorite running shoes: “I use Saucony Hurricanes for my easy days because of the stability they offer and their cushion. For my workout days I use the Saucony Endorphin speeds. They’re really responsive and bouncy as well as offering a lot of cushion. All in all they’re just a really enjoyable shoe to run fast in.
Favorite local running venue: “The Bryn Coed preserve. Over the summer we meet there for all of our workout days, and it has endless trails through woods and open land. Bryn Coed is perfect for tempos over the summer because it’s on grass and has rolling hills and turns which perfectly simulates a cross country race.
Pre-race preparation: “I’m usually pretty restless the night before a race, so I wake up early in the morning. To pass the time I either watch youtube or listen to music. I then pack up my bag and stop at Wawa on the way to East to pick up breakfast and some food for the day. When we get to the race venue we do a course run through/shakeout almost immediately. For the rest of the time I’ll lay under our team tent with my teammates and listen to music to get into the right headspace. We start our warmup 45 minutes before the race starts.”
Other extracurricular activities: “I’ve been learning to play guitar.”
Favorite book: The Fault in our Stars.
Favorite TV show: The Vampire Diaries.
Favorite movie: Fight Club.
Favorite athlete: Bryce Hoppel.
Favorite pre-race pump-up song: Helena by My Chemical Romance.
Favorite place to visit: Stowe, Vt.
Favorite pre-race meal: Vanilla Honey stinger waffle and a banana.
Person I most admire, and why: “Both of my parents, for how hard they worked to supply my sister and me with a good life.”
Family members: parents Mike and Lisa, sister Sydney, dog Gia.