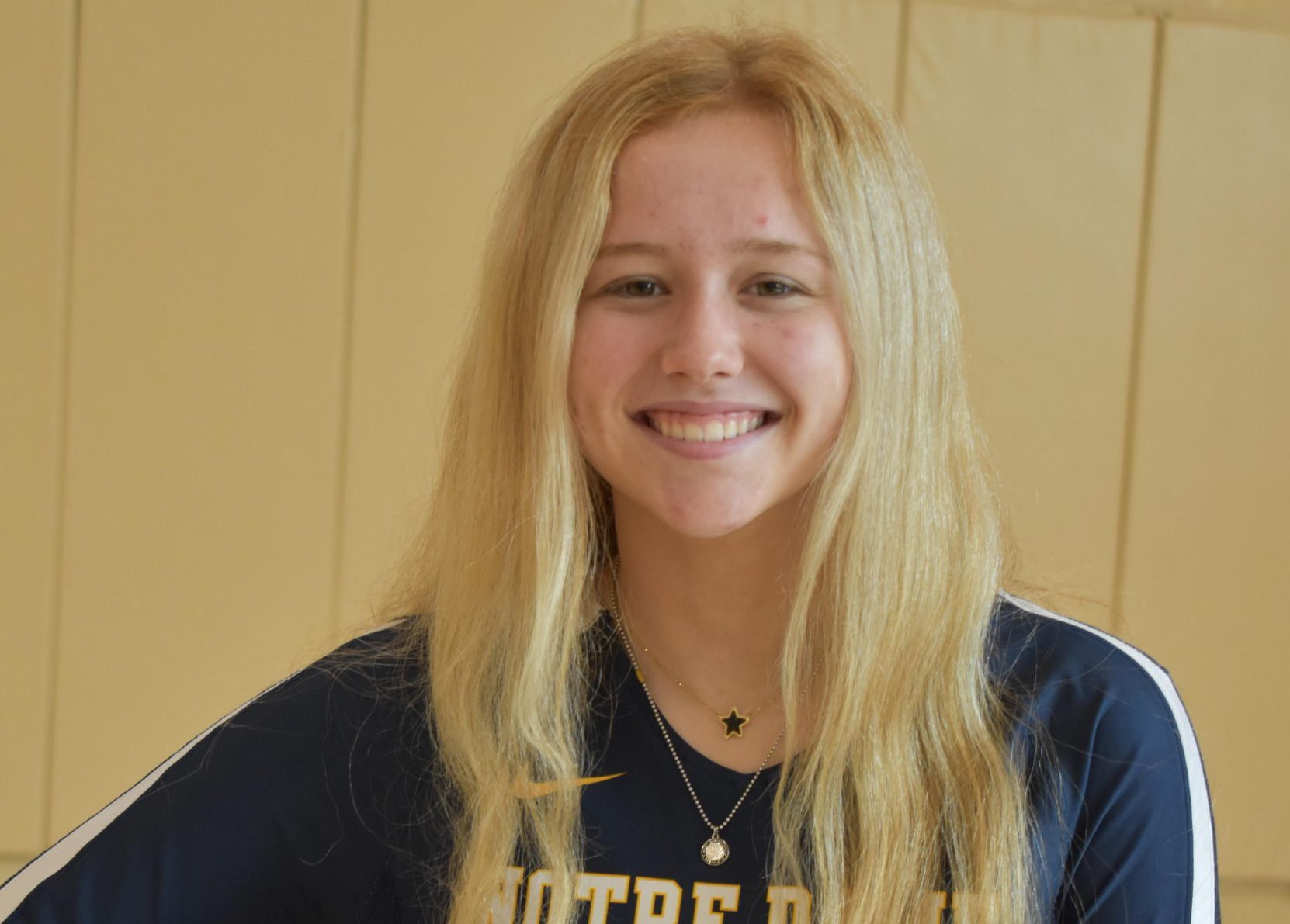 The senior setter and co-captain, a first team All-Inter-Ac selection, played a key role in the Irish capturing their eighth consecutive PAISAA state girls’ volleyball title, leading the team in assists and aces. Academy of Notre Dame volleyball coach Mike Sheridan said, “Maddie was coolest when the pressure was the greatest, not only with her setting, but also with her serving and defense. Her consistency in setting a variety of balls allowed strong attacks from all front row hitters. She truly was the engine that made the offense go.”

Q: What aspect of the game did you work on most during this past season?

A: This season I worked on timing with the hitters on my team and my back setting. In order to beat the best teams in the area, we needed to capitalize on our height, and it was important for me as the setter to place the ball exactly where they needed it for every play. I try to play smart by watching the other side of the court as I am setting the ball. This allows me to give the hitters on my team the best chance for success.

Q: What is your favorite memory of the 2021 season?

A: My favorite memory was the PAISAA championship game against Agnes Irwin. The gym was packed with fans, and the atmosphere was unlike any other high school game I had ever played in before. There was a lot of pressure to win, but I did not let that distract me or my teammates. I played just like it was any other game even though there was so much on the line. In a split second after the last point was recorded, the fans rushed the court and streamers were flying everywhere.

Q: You have always been a setter – what sparked your original interest in volleyball?

A: I originally started playing CYO Volleyball in 5th grade because all my friends were playing, and I immediately fell in love with the game.

Q: What part of your game are you currently working on?

A: I currently am working on becoming a better all-around player. In order to do that, I need to spend more time on the court passing. I am also working on my vertical jump.

Q: Who has been your biggest volleyball mentors, and what was the most important thing you learned from each one?

A: My CYO coaches taught me the basics of the game and how to lead by example on the court. From my club coaches, I learned that getting better as a player takes hard work and dedication. My high school coach, Michael Sheridan, taught me to trust myself and gave me the confidence to run the team’s offense each game. He always stressed the value of teamwork over the years, and this is a lesson that I will use throughout my life.

Favorite pre-game pump-up song: Pump it Up by Endor

Favorite course at Academy of Notre Dame: “Ceramics. I love being able to relax and to create different pieces in class.”

Pre-game preparation: “I try to eat a healthy breakfast and drink plenty of water on game day. Before the game, I get together with my teammates to talk strategy, and then we blast our music during warmups to get hyped for the game.”

(In order to be selected for Main Line Girls Athlete of the Week, a student-athlete must first be nominated by her coach.)