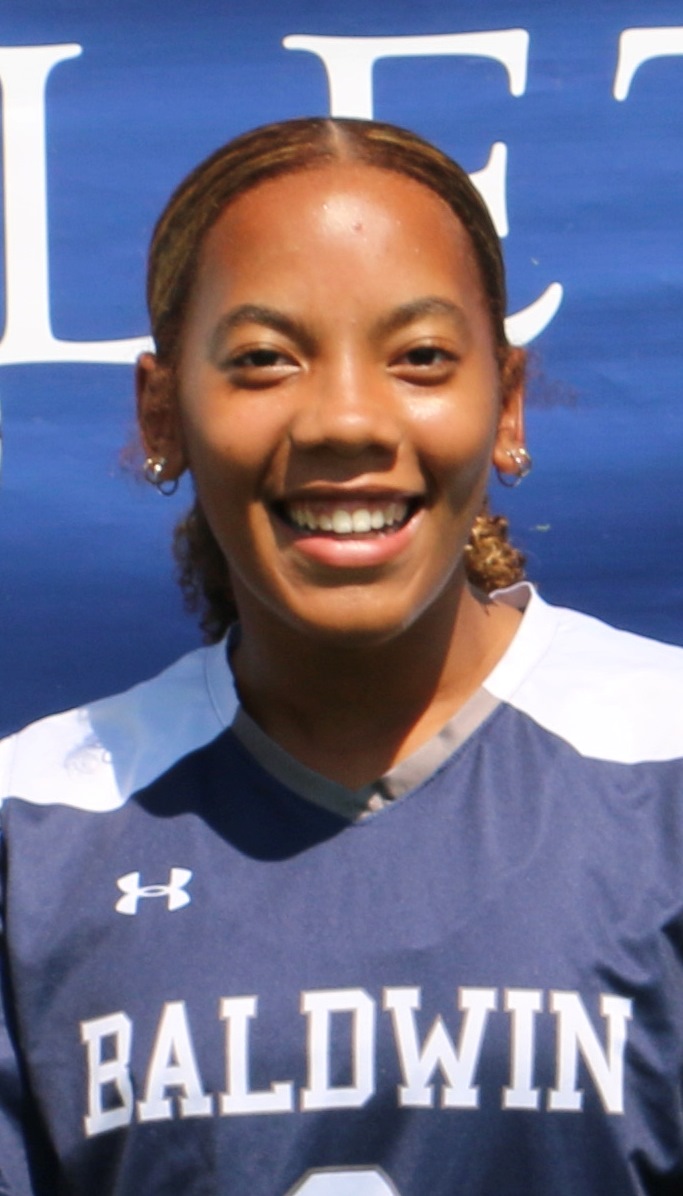 The senior forward/midfielder, a first team All-Inter-Ac girls’ soccer selection this fall, was a key factor in the Polar Bears advancing to the PAISAA state semifinals, capping a strong four-year career at Baldwin with potent all-around play (including a dozen goals scored). Off the pitch, she is Baldwin’s Senior Head of both the Black Student Union and the Student Diversity Equity and Inclusion Club. Baldwin soccer head coach Adrian Cox said, “Brianna is a hard-working, fearless, determined and selfless player who utilizes her speed, quickness and aggressiveness to create havoc on opposing defenses. She can beat defenders off the dribble and is always a threat to score or deliver an assist near the goal. Her work rate off the ball is relentless and her defensive pressure and tackling is tenacious. Brianna is a leader and represents the school community with class and character on and off the field.”

Q: How did you view your leadership role on the team (on and off the field) this fall?

A: I viewed myself as a leader by example on the field and as a friend off the field.  Every time I stepped onto the pitch, I wanted to show my teammates what it looked like to have grit and drive and I hoped that my energy rubbed off on them.  Off the field, I wanted to be the friend and classmate that my teammates could come to for anything.

A: I think that the strongest aspect of my game is being a playmaker – making the decisions or taking the actions that change the trajectory of the game.  I am currently working on my finishing so that I can be more consistent as a striker.

Q: What is your favorite memory of the PAISAA postseason?

A: My favorite memory from the post-season was getting that huge win against Penn Charter in the first round of the PAISSA playoffs.  We knew we were the underdogs that day and we came out as a team with so much energy and grit that we hit our opponents with something they did not expect.  I was extremely proud of our team.

A: I plan to major in biology.  I’ve always had a love for animals and I hope to become a biomedical engineer so that I can make prosthetic devices and other medical aids for animals in need.

A: My mom has been my biggest mentor because she has been my biggest supporter throughout my entire career.  She has had a great influence on the player that I am today and has always been there through my highest and lowest moments.  At Baldwin, Coach Cox has taught me the importance of leadership on and off the field.  Additionally, my club coaches have not only taught me the technical and tactical aspects of the game, but also how to love it.  I’ve learned so many valuable lessons from all of them.

A: My biggest goal for the Black Student Union is for black students within Baldwin’s upper school to really come together and interact more with black students across Baldwin’s divisions so that we can serve as positive role models, mentors, and forge long lasting relationships with younger students.  As for SDEI, I essentially want to provide Baldwin students with a safe space which can be used as a bridge between students and teachers when it comes to issues regarding race, inclusion and diversity.  I also hope to build better relationships between our affinity groups as we grow to understand not only each other, but the aspects about us that make us alike.

A: In general, I try to stay calm on game days and think about my goals for the game.  If we have an away game, I listen to music and prepare myself as we travel.  When we hit the field for warm-up I think about what I need to do to execute as an individual player and my role within the team as a whole.

Q: You wear uniform jersey No. 9 for Baldwin soccer – why did you pick this number?

A:  When I first started club soccer, I had absolutely no idea what number I wanted.  My coach said, “Be the number 9, that’s the number of a striker.” Ever since that day, 9 has not only been my favorite number, but also the number that represents me as a soccer player.

Q: This is your second year playing for FC Delco – what has been your most memorable experience for FC Delco?

A: My most memorable experience was when we went to the PDA (Players Development Academy) tournament this past summer.  It was extremely hot outside and I played a total of six games in three days because I assisted the older team while also playing for mine.  It was truly an adrenaline rush and the experience reminded me why I love the game so much.

Favorite book: On the Come Up, by Angie Thomas