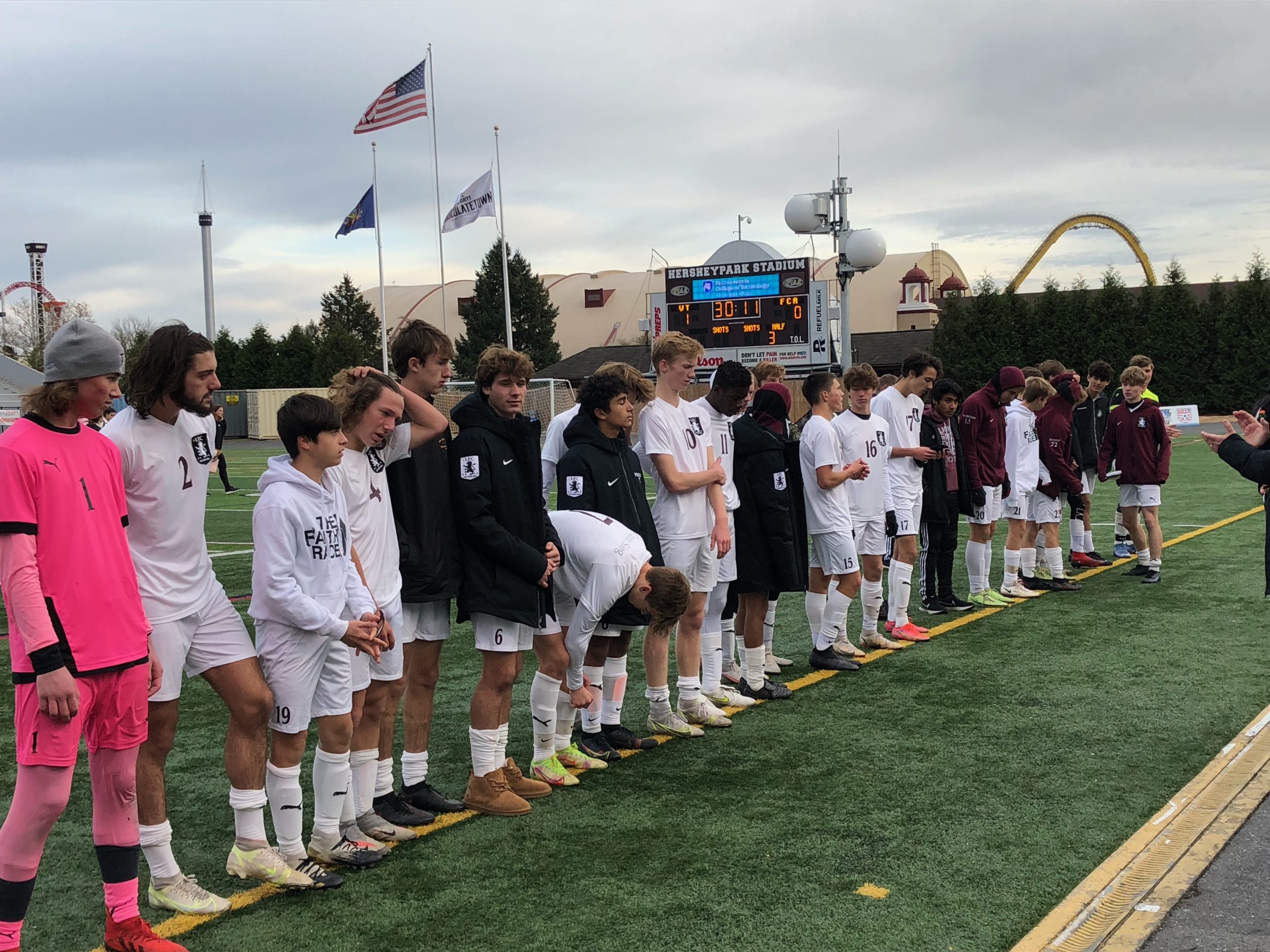 The Faith Christian Academy boys soccer team waits for its medals after falling to Winchester Thurston in the PIAA 1A final in Hershey on Saturday, Nov. 20, 2021. (Andrew Robinson/MediaNews Group)

With about 10 minutes left in the second half, the Faith Christian Academy senior midfielder had a prime chance to break a scoreless deadlock, but put a bit too much on his flick attempt and hit the bar. All he could do was put his hands on his head, a mixture of disbelief and frustration at the missed opportunity in a day full of them.

Faith’s finishing touch wasn’t there, but Winchester Thurston’s was at the end as the Bears topped the Lions 1-0 in extra time to win the PIAA 1A boys soccer title game at HersheyPark Stadium on Saturday, denying FCA a championship repeat.

“We had chances to finish, which we didn’t do and that includes myself,” Rea said. “Overall, we had a great season and I’m unbelievably proud of these guys who are on my team.”

Oliver Daboo finally won the game for the Bears with 8:06 left in the first overtime, hitting a scorcher off his left foot to the far post after a chaotic sequence in the box. The lead-up, which saw a Faith player on the ground, ball on his stomach and the Winchester Thurston bench screaming for a handball, was kind of emblematic of the whole game, where every opportunity was met by whatever-it-takes defending.

The District 7 champions needed to be that tough defensively because while Faith wasn’t finishing chances, it was generating a lot of them. FCA put six shots on goal and had seven corner kicks. Rea said the team was able to generate chances through its forwards and playing give-and-go balls out of the middle and stretching the field wide.

Faith Christian had reason to be optimistic coming off a strong postseason run offensively, but for whatever reasons, the goals didn’t join them on the trek to Hershey.

“Our last game, we were on fire,” Rea said. “We watched a lot of film on this team and compared to what we saw from our last game against Moravian (Academy) and this team, we felt we would be able to put up a good fight. It just didn’t turn out our way.”

The Lions made their second consecutive trip to Hershey, coming off a 5-1 win over Greensburg Central Catholic in last year’s state final.

FCA largely dictated the first half but were tuned out by a couple saves from Bears keeper Oliver Graham and a few good-looking sequences led astray by a shot off target or a Winchester Thurston defender’s intervention. After the half, the Bears settled in and had the game’s first real scare.

Alex Hauskrecht shot from the left wing, his low take clanging off the far post and in the scramble after, Tomer Tuti hit a rocket back in. Tuti’s hit rang the bottom of the crossbar but somehow avoided crossing the line to give the Bears a lead.

Lions coach Ryan Clymer felt for his guys, who left all they had on the field, but gave all credit to Winchester Thurston for winning and to Daboo for hitting such a good final ball.

“He was the best player on the field all day, when he got the ball, he dictated everything they did,” Clymer said. “Both teams got stuck in it, they hit the post, we hit the post, it was an entertaining game to watch. Hate it for the guys, but somebody has to lose.

“Wins and losses don’t define us as people, we’ll pick ourselves up, learn and try to come back a third time.”

Faith will have a much different look next season as it graduates a very influential senior class. The Lions lose 14 seniors includling Rea, Marcus Pringle, Peyton Curry, Bobby Elitz, Arnaud Huet and Christopher Evans, who were all among the key contributors on Saturday.

Rea said he couldn’t be any prouder of what he and his classmates accomplished in their four years, including the first state title in program history.

“They’ve busted through any ceiling we’ve had,” Clymer said. “From winning districts back-to-back to making final four appearances back-to-back, it’s a good group of kids who love each other and work hard. It’s probably the hardest working group I’ve had and they will be missed but they set the bar high and now the underclassmen know what it takes to get back here.”