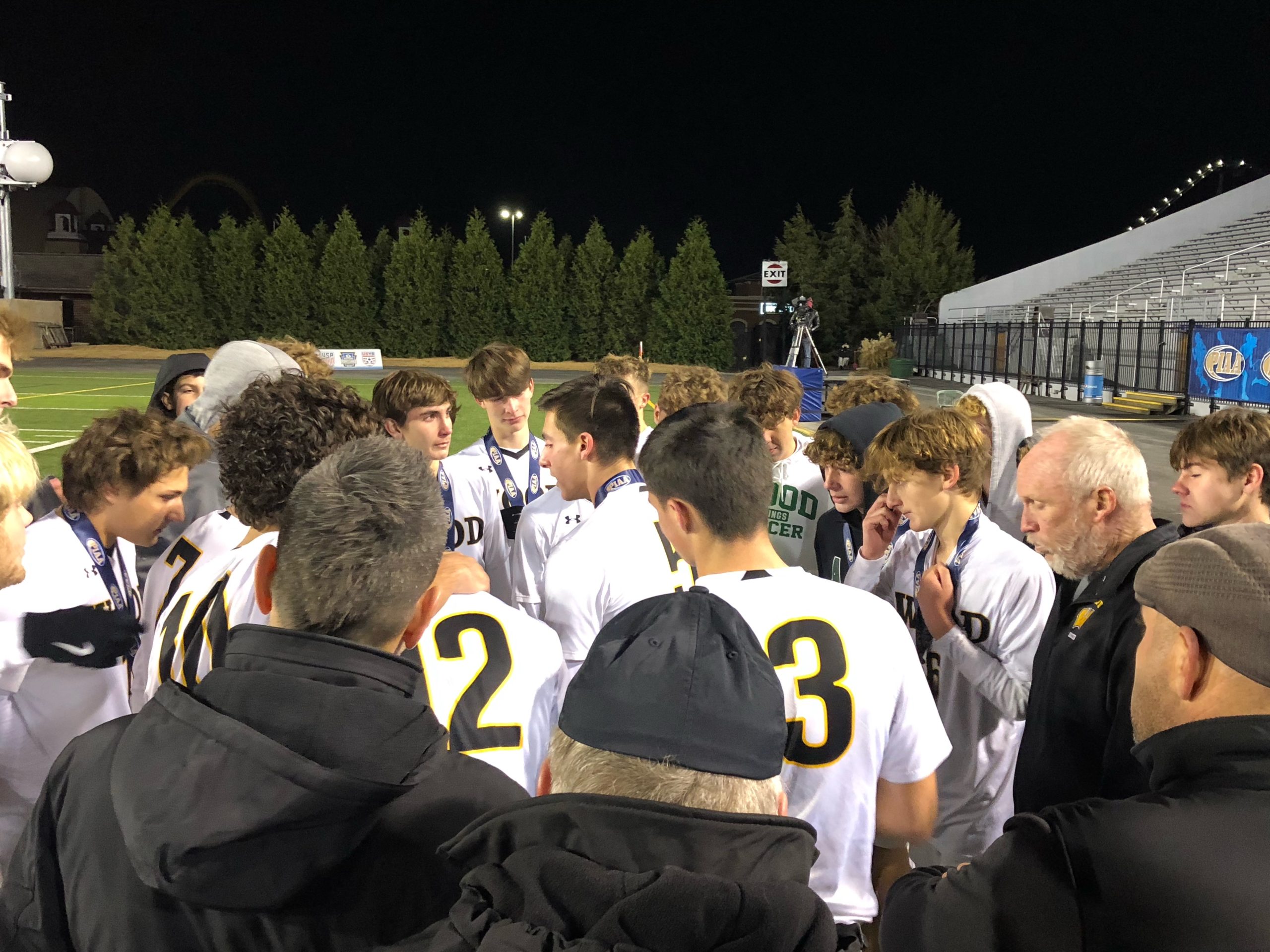 HERSHEY >> Dom Petruzzelli lifted the PIAA Class 3A runner-up trophy high with his teammates gathered around him.

“We earned this,” the Archbishop Wood senior captain said.

Sure, he and the rest of the Vikings would have much rather been lifting the state championship trophy Hampton was getting on the other side of the field, but Petruzzelli was right.

After playing just four games in 2020 and getting shocked in the quarterfinals of the PCL playoffs as the No. 2 seed, the Vikings put all their energy on winning the program’s first state title. They got to Hershey for just the second time in program history but an old foe in the Talbots prevented the final step, as the District 7 champions edged Wood 1-0 Saturday night at HersheyPark Stadium.

“We would have liked to win, but I’m proud of myself, my boys, my other captains and especially my seniors,” Petruzzelli said. “All 10, they’re my brothers for life. They’re my guys to the end and it’s an experience I will never forget.”

The 2020 season took a lot from a lot of teams across the state. For Wood, their entire season essentially came down to the outcome of one single match and when they lost, any hope of the postseason was gone with it.

That seemed to motivate the group all fall as they powered through a tough schedule and ascended all the way to the No. 2 seed in the PCL standings heading into the playoffs. Instead of making a run at another Catholic League title, the Vikings were ousted by No. 7 Lansdale Catholic and again left to pick up the pieces.

It served as more fuel, first sending the team to a District 12 title then on its run to Hershey.

“That LC game was such a disappointment considering we were the second seed and had all the momentum going into playoffs,” senior Lou Daniele said. “It hurt, it shocked us and it was a wake-up call but it allowed us to have a great state run. We brought the energy to every practice and game and that’s really all I could ask for from my teammates.”

Wood left all it had on the field against Hampton, which beat the Vikings by an identical 1-0 score in the 2010 Class 2A final, but couldn’t break through the Talbots’ rigid defense. The Vikings have had a stout defense all year but they were out-done on the night by Hampton.

“It was hard to get touches inside the box, their defense was spectacular,” Petruzzelli said. “We fought to the end, we had a shot hit the crossbar twice. We had them, we played hard, we just couldn’t get that final pass into the box and finish our chance.”

Julian Naumenko made two spectacular saves for Wood in the first half to keep the match scoreless at the break.

Hampton broke through just before the midpoint of the second half, when a flicked on ball found the tandem of Luke Staggers and Zach Pansza for a 2-on-1. Despite shouts for an offside call from the Vikings, the play was continued, with Staggers laying the ball off to his left where Pansza drove it back across goal and inside the far post for the winning tally.

Wood’s defense, which featured Petruzzelli, Daniele, Albert Funk, Colin Christian and Tyler Kilmer during the season, made plenty of stops against the technically skilled Talbots but they had no chance on this one.

“They put one over the top, got a good pass and ended up finishing it,” Petruzzelli said.

The goal only seemed to further embolden the Vikings, much like the other challenges they’ve faced this season. Daniele pushed up the field and knowing how difficult it had been to get the ball in the box and square up a shot, the senior started looking from range.

He got a chance with 14 minutes left, hitting an absolute rocket that caught a fingertip of Hampton keeper Thomas Bradfield and then the crossbar not once, but twice.

“My first priority is to put the ball in the back of the net, we struggled with that tonight so when I saw the opportunity to take the shot, I figured I might as well rip it,” Daniele said. “Hit the crossbar twice, a double-doinker, not much else you can do.”

Like Petruzzelli, Daniele lauded the tightness of this year’s team. The towering defender counts every other player on the roster as a close friend and said every day after games or practices, they went out together.

“It was really meaningful to me,” Daniele said.

Wood coach Hugh Kelly pointed to the number of younger players like Funk, Naumenko, Giuseppe Prospato and others who will be back and hoped they could get back to the drawing board and start planing another trip to Hershey. The senior class will be difficult to replace, on the field but as much off it.

“You don’t see this kind of group and camaraderie very often,” Kelly said. “The character we have is tremendous, it’s unbelievable seeing it from the whole group.”