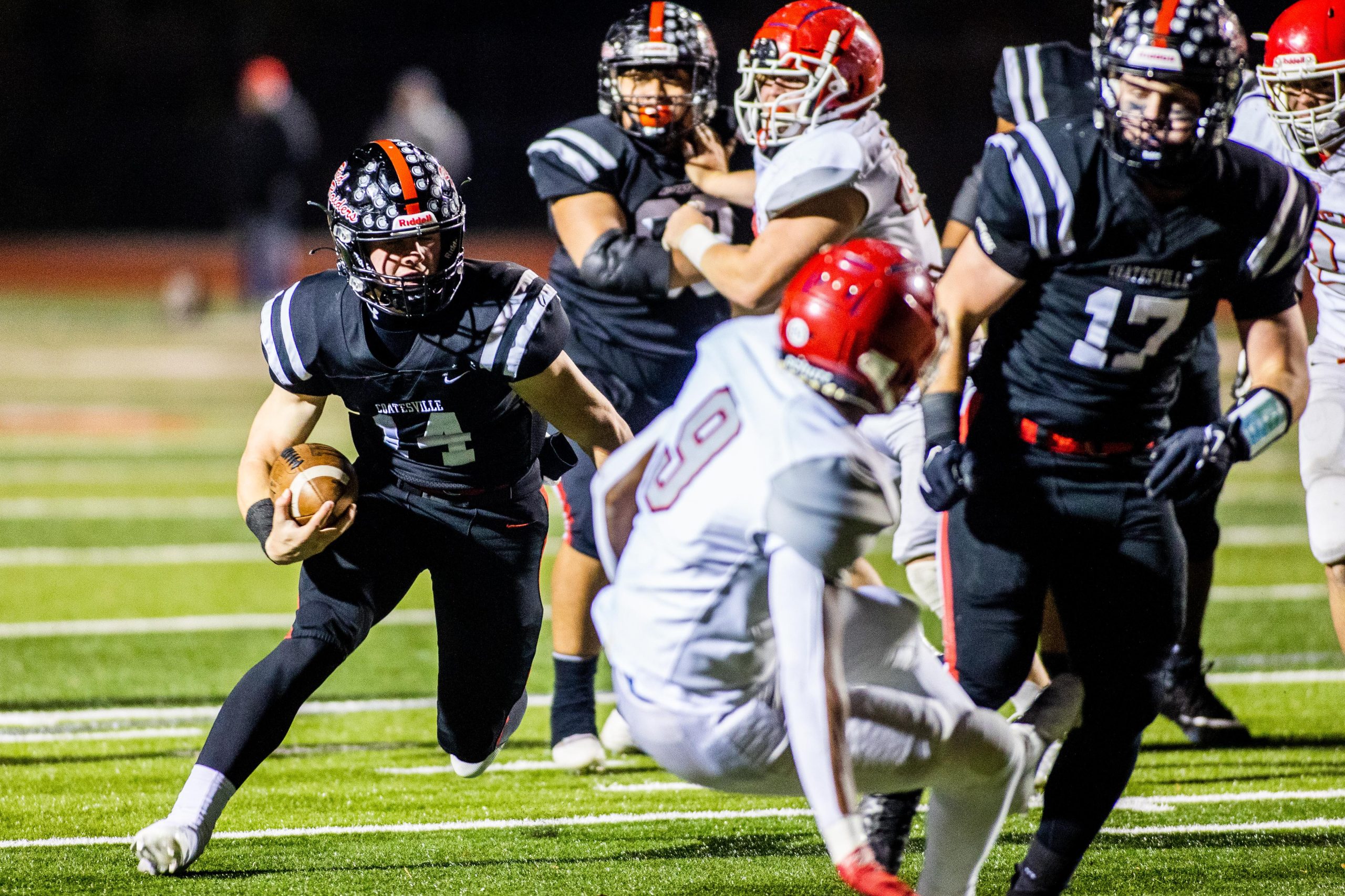 CALN – Host Coatesville scored the first 37 points of the game then cruised to a 50-14 rout of Ridley in a District 1 Class 6A semifinal game Friday night.

The third-seeded Red Raiders thus advanced to the district title game next Friday against top-seeded Garnet Valley, a 58-37 winner over Quakertown.

Coatesville (12-1) jetted out to a 37-0 lead at halftime, running the ball at will against the Green Raiders (11-2). Ashon Wesley had 104 yards rushing and quarterback Harrison Susi totaled 143 yards on the ground and Bryan Lacey chipped in with 107 yards rushing. Coatesville ended the night with 390 yards rushing and 510 total yards.

“I think we have the best (offensive) line in the entire state,” Coatesville receiver Tommy Ortega said. “We just imposed our will on them and it worked out. Our linemen work really hard at what they do. We did not throw the ball much because we ran so well but I will take less catches to get a win like this anytime. This is a great feeling right now.”

The Red Raiders got two first period touchdown runs from Wesley to make it a 14-0 game after one quarter. Wesley scored on runs of 26 and one yard and it was clear early that the Ridley defense wasn’t up to the tall task of holding down the potent Coatesville attack.

The Ridley offense could not generate any first downs in the first half and the Coatesville defense, led by Nolan O’Hara and RJ Rickabaugh, held Ridley star running back Tahir Mills to just 83 yards on 26 carries on the night. Mills was met by a caravan of Red Raiders defenders every time he touched the ball.

Coatesville effectively put the game away in the second period, scoring 23 unanswered points to take a 37-0 lead at halftime and putting the entire second half into the mercy rule. Susi scored on a 31-yard run untouched right up the middle of the Ridley defense and then after a Ridley punt, Susi hit James Taylor, who was wide open, for a 58-yard touchdown pass late in the second period.

Coatesville was not done however. The Red Raiders forced a Ridley punt and took over at their own 43 with less than two minutes to go in the first half. No problem for the Red Raiders, as seven plays later Lacey bounced in from two yards out.

“We just had a real bad first half tonight,’ Ridley quarterback John Heller said. “They just jumped on us and we could not get anything going. Give props to them. They are a great football team.”

The second half saw Coatesville head coach Matt Ortega empty his bench on both sides of the ball and the Green Raiders scored 14 points, one on an 11-yard touchdown run by Mills, and then Heller hit Nahij Saleen with a 72-yard touchdown pass for the final points.

But the Red Raiders were already thinking about next week.

“We know them and they know us and they are a great team,” Ortega said of the Jaguars. “But we will get ready and go down there and try to win a district title. It should be a great game.”