Mercury Week 12 Football Review: From A to Z – recapping the year in area high school football 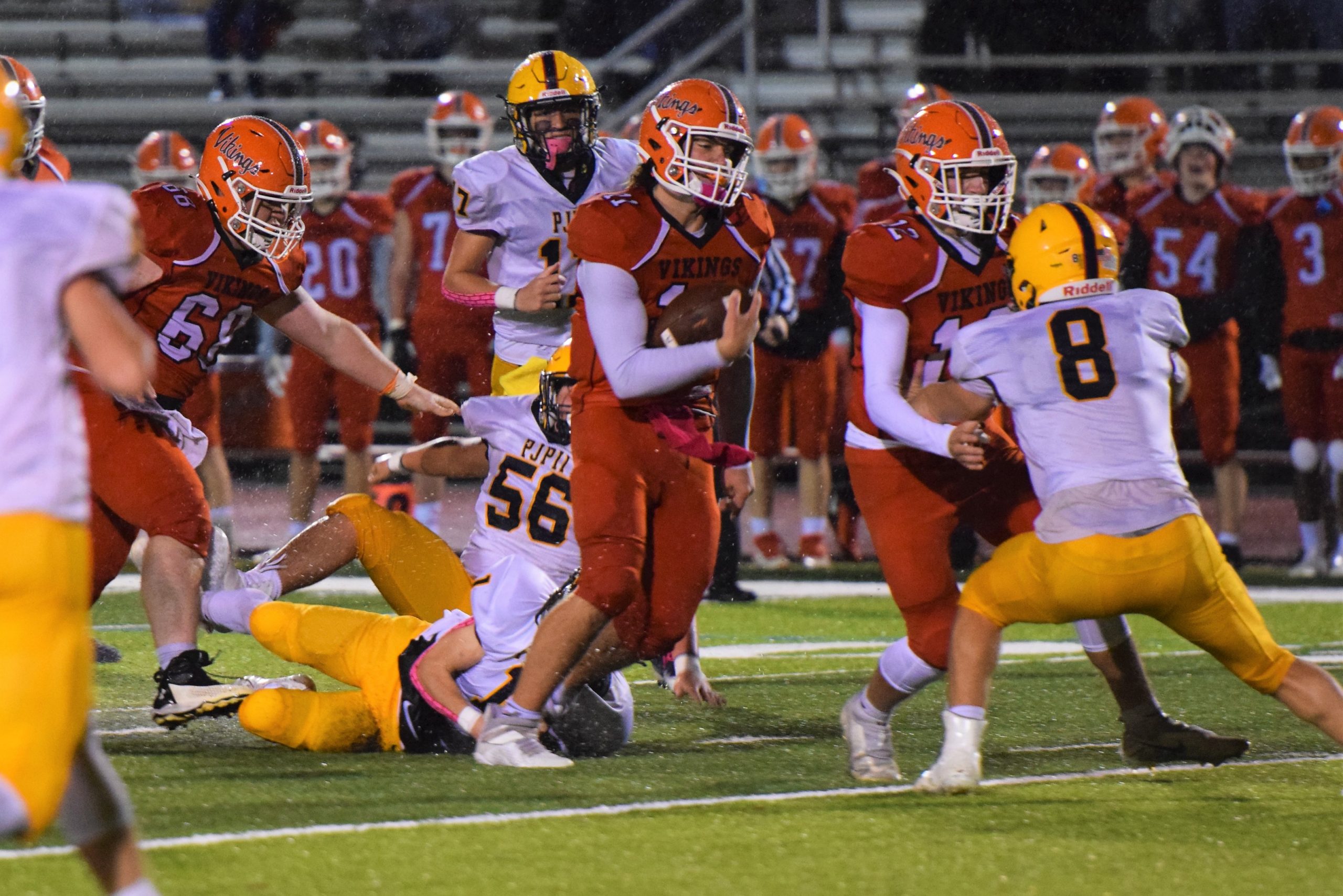 It was the season we all needed.

After a hectic 2020 that saw many area schools lose out on considerable portions of their gridiron campaigns, 2021 saw a return to normalcy. A familiar squad returned to sit atop the Pioneer Athletic Conference, while some newcomers emerged to make their marks as more than half the area’s teams qualified for postseason play.

The local season may have ended this past weekend, with Perkiomen Valley and Pottsgrove’s respective losses in the second weekend of District 1 playoffs. But from A to Z, these are the people, places, and events that defined area high school football in 2021.

A is for Avrey Grimm >> Owen J. Roberts’ standout running back claimed the PAC rushing title for the second straight year, accumulating 1,677 yards on the ground in leading the Wildcats into the 6A playoffs. Grimm eclipsed the 200-yard mark in three different contests, his season highlighted by a 93-yard TD scamper on the Wildcats’ first offensive play of 2021 in their opener at Conestoga.

B is for Battle >> That is what every team was afforded the opportunity to do this fall – a bigger blessing than anyone would have imagined it could be 20 months ago. But after season’s lost or affected by the pandemic precautions of 2020, the chance to line up and compete every Friday – and the practice days in between – was this fall’s victory for all teams. From winless Pottstown to PAC champion Perkiomen Valley and every team in between, the battle was the best part.

C is for Comeback >> Pottsgrove forged the season’s most memorable one at Spring-Ford in Week 10, saving their own season in the process. The Falcons fought back from a 13-0 deficit in the game’s final five minutes to claim a 14-13 victory. Ryan Sisko hit Tyler Kaufman for a 23-yard score with only 17 seconds to play, catapulting the Falcons into the playoffs, where they would advance to the District 1 Class 4A title game before bowing out against Bishop Shanahan last Friday.

D is for Dawson Debebe >> The senior emerged as the leader of PAC champion Perkiomen Valley’s deep receiving corps. Debebe led the PAC with 731 receiving yards and added 8 TD receptions in his senior season as PV returned to the top of the PAC.

E is for Ethan Kohler >> Kohler did it all for the explosive Perkiomen Valley offense in 2021. He completed 67 percent of his passes for 2,392 yards and 28 TD with only 4 interceptions. But it was his work on the ground that carried the Vikings at times, as the 6-foot-3, 215-pounder developed into a dual threat, accumulating over 500 yards and a dozen more scores. Add it all up, and it’s safe to say the senior QB fulfilled every bit of the promise he showed back in 2018 when he debuted by rallying PV past Spring-Ford, setting up the Vikings’ last PAC championship before this season.

F is for Frontier Division >> Pope John Paul II was the champion yet again in 2021, as the Golden Panthers went 5-0 in divisional play capping their run with a 42-6 defeat of eventual District 1-4A finalist Pottsgrove in Week 9.

G is for Game of the Year >> Two candidates stand above the rest in the 2021 season and both just so happened to be in Week 4: Perkiomen Valley vs. Manheim Central and Boyertown vs. Pottsgrove. We’ll cover them both later in this column – you make the call.

H is Honorary Captain >> The role was served by former 2005 Boyertown grad James Develin during the Bears’ home game against Perkiomen Valley on Oct. 16 at Memorial Stadium.

Though the night ended in a 38-0 loss to eventual PAC champ Perkiomen Valley, having a three-time Super Bowl champion — Develin won rings with New England Patriots in 2014, 2016 and 2018 — back in the area on a Friday night can’t go unmentioned.

I is for Improvement >> The nod for most improved in 2021 goes to the Phoenixville Phantoms, who recovered from a cancelled season opener and a 1-4 start to end the regular season with four straight wins and a berth in the 5A playoffs. Coach Anthony Ciarlello’s first season in the full-time role ended with a narrow loss to the Central League’s Marple Newtown, but the 2021 squad took a big step towards re-establishing the Phantoms’ program as a contender in the Frontier Division.

J is for Josh Little >> Pope John Paul II running back Little gets the ‘Stat Sheet Stuffer of the Year’ Award from the Frontier Division. Little amassed 16 rushing TDs on only 114 carries, going for 957 yards (over 8 yards per carry). He added exactly 11 yards per catch on 25 total grabs, adding a couple more scores through the air. On defense, Little was a constant presence at linebacker for the Golden Panthers, competing for the team lead in tackles.

K is for Klimek >> Ryan Klimek, that is, the Perkiomen Valley running back who served as Little’s counterpart in the stat-stuffing department in the Liberty Division. Check out these numbers:

Kicking: 69 total points (1st in the PAC among kickers)

L is for Legacy >> Brian Dickey’s is becoming Methacton’s all-time leader in single-season pass receptions. Dickey accomplished the feat in the Warriors’ final game against Upper Perkiomen, a 24-0 win that brought the Warriors to .500 on the season. Dickey finished the year with 42 grabs. Best of all, the record breaker came on a 4th-and-9 play that extended an eventual touchdown drive.

M is for Manheim Central >> who outlasted Perkiomen Valley 43-40 in Week 4 for our first Game of the Year nominee. Ethan Kohler threw for 198 yards and ran for 77 more, while Jeremy Brewer took a kickoff 98 yards for a Perk Valley score. But the Barons of Manheim Central were led by Justin Heffernan’s 29 carries for 144 yards in a seesaw tilt that thrilled the crowd at Thomas J. Keenan Stadium.

N is for Norristown >> Norristown started the season 0-8 but got off the mat to claim two season-ending victories – an upset of Boyertown, 33-28 in Week 9 before shutting out Pottstown in the crossover game and going into 2022 with some needed momentum.

O is for Owen Koch >> The leading producer for a Phoenixville offense that enjoyed a resurgence in 2021 and took the Phantoms back to the playoffs. Koch overcame injuries his sophomore year and a chaotic 2020 junior season to go out strong, leading the Frontier Division with 1,130 yards rushing and along with linemen Roman Ciavarelli and Solomon Ortiz, providing leadership to a young-but-promising Phoenixville program.

P is for Perseverance >> Daniel Boone showed in abundance in returning to the 5A playoff field in District 3 this season. The Blazers’ 5-3 record was enough to earn a 12-seed in the playoff field despite having their final two regular season games cancelled. DB’s offense was led by sophomore QB Dean Rotter, who filled in ably after Carter Speyerer’s injury, plus strong senior seasons at the skill positions from RB AJ Hofer and WR Alex Vassallo.

Q is for Quite a Night >> Spring-Ford coach Chad Brubaker had a doozy on October 15, when he became the winningest coach in school history when the Rams blanked Methacton 39-0. The game doubled as Brubaker’s 100th career victory in his 12th season at the helm for the Rams – the longest current tenure of any PAC head coach.

R is for Rivalries >> This area has plenty of them. But for six consecutive years, it’s been the Spring-Ford/Perkiomen Valley tilt that’s determined the league’s eventual champion, and the trend continued in 2021 as the Vikings held off the Rams 28-22 in Week 5. Ethan Kohler carried 20 times for 147 yards in the signature display of his dual-threat capabilities to end the Vikings’ two-year losing streak in the ‘Battle of the Horns.’

S is for Special Teams  >> A season that reminded us just how important these units are to success in high school football. Pottsgrove running back Amir Brunson returned four kicks (three kickoffs, one punt) for touchdowns, Spring-Ford’s Gage Swanger returned three different kickoffs for 90+ yards and touchdowns, and Perk Valley’s Klimek’s impressive 179 total points scored were aided by his 54 successful PATs and five field goals (with a long of 41 yards.)

T is for Cole Turner  >> The leader of the Spring-Ford secondary who set a record that’ll be hard to top with four interceptions in the first half at Norristown in Week 6. Turner even capped the accomplishment in style, returning the last of the four pilfers 32 yards for a touchdown.

U is for Unscored Upon >> which Perkiomen Valley’s defense was for 15 consecutive quarters, ranging from halftime of their Week 7 win over Owen J. Roberts until the second quarter of their Round 1 playoff win over Central Bucks East. In all, the Vikings accumulated 149 points during the time they held their collective opposition to a goose egg.

V is for Vikings >> While the band from Perkiomen Valley has seen plenty of attention in this column, let’s not forget the group from Upper Merion, whose first season under coach Davis Chubb ended with a trip to the 5A playoffs, where they fell to Strath Haven. Quarterback Zayd Etheridge impressed in his first year under center, completing almost 60 percent of his passes for 1,146 yards and seven scores for the 4-7 Vikings.

W is for Wacky >> Possibly the best word to describe the night of Oct. 29, or Crossover Week in the PAC. The evening featured games affected by a driving rain and winds gusting upwards of 40 miles per hour. The weather played a role in handcuffing PJP’s normally prolific offense (67 total yards) in their PAC title game loss to Perkiomen Valley, yielded a most unique final score in the OJR/Phoenixville game (won by the Phantoms by a baseball-like 6-2 tally), and wreaked havoc with numerous punts, passes, and kicks around the area.

X is for Xtra football >> In week 4 the spectators at Boyertown were treated to plenty of it in our second nominee for Game of the Year. The host Bears scored an impressive 42-35 upset victory over Pottsgrove in four overtimes. Leo Egbe, who went over 1,000 yards for Boyertown in 2021, tallied the winning score while Anthony Famularo forced a fumble that was recovered by teammate Anthony Panarello to seal a win that highlighted the Bears’ campaign.

Y is for You’ve got to be kidding! >> That was the reaction of many when Pope John Paul II, at a record of 7-3 and a PAC finalist, found themselves on the outside looking in when the 4A playoff field was revealed. The Golden Panthers won the Frontier Division in convincing fashion but could only watch as four teams – one of which amassed only five victories – outpointed them in the standings. It’s the latest argument for a reconsideration of the District 1 power rankings system.

Z is for Zollers >> The surname of brothers Zach and Matt who announced their presences in a big way at Spring-Ford this fall. Junior Zach had 45 receptions – trailing only teammate Kolten Kqira in the PAC – and nine receiving scores for the playoff-bound Rams, while freshman Matt saw increasing time behind center as the season progressed, showing remarkable efficiency with 20 percent of his completions going for scores. SF will surely miss the graduating Ryan Freed, but the future appears bright at the quarterback position in Royersford.