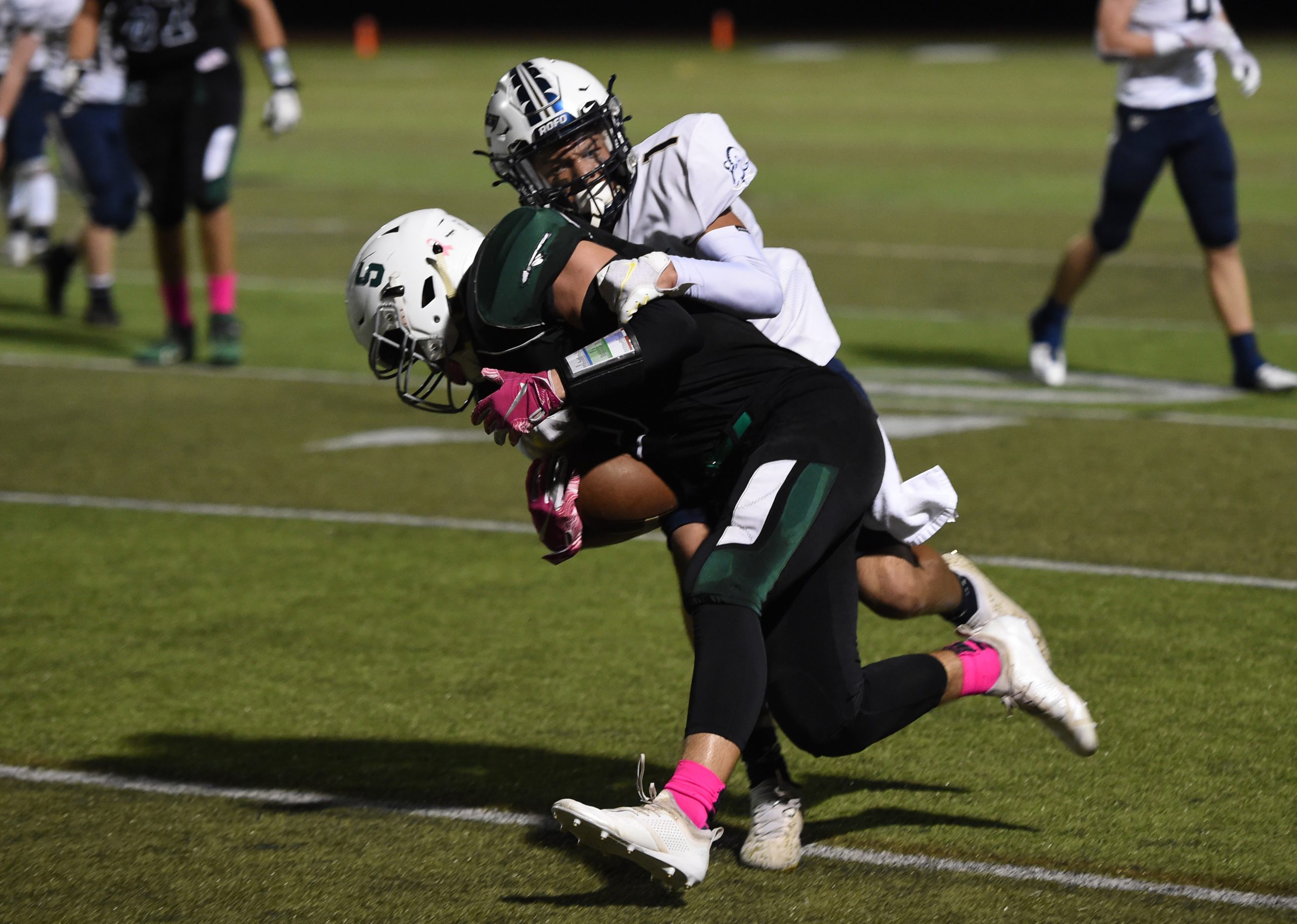 Of the six PAC football squads that qualified for the District playoffs in their respective classifications this season, only two – Perkiomen Valley (6A) and Pottsgrove (4A) progressed to the second round with victories Friday night. As such, our attention will turn to these teams in the coming days (hopefully, weeks) in anticipation of the next round of playoff matchups.

That’s the nature of sports, and especially of the single-elimination football postseason. Survive, advance, and people will continue to talk about you. Lose, and your season ends, and suddenly as the old oxymoron goes “the silence is deafening.”

So this week, we begin with a nod to those PAC players who went out with a bang this week. Talking to each of their coaches, it became clear these players were not necessarily the ones who stuffed the stat sheets on Friday nights, but nonetheless left lasting impressions on the field and within their programs and communities.

Cole Turner, DB, Spring-Ford >> Turner’s four interceptions in the first half Oct. 8 against Norristown got the Spring-Ford senior some headlines. But they’re not what coach Chad Brubaker will remember about Turner’s 2021 season.

“We were wondering where our leadership would come from this season,” said Brubaker. “Cole surpassed all expectations in that area. When one of his teammates is headed in the wrong direction – Cole reaches that kid before even the coaches can.”

The Rams started slowly in their 21-14 loss to Downingtown East but were the stronger team for much of the second half and came awfully close to completing a comeback from a 21-0 deficit. Brubaker gives the credit to Turner. “Sometimes you’ll see lopsided games in the playoffs, because that realization sets in – ‘this could be my last game.’ They start to feel down.

“At halftime, Cole was going around telling everybody ‘we’ll get back in this game. Keep doing what you’re doing.’ That encapsulates what he’s meant to this team beyond just his play on the field.”

Roman Ciavarelli, G/DL, Phoenixville >> Ciavarelli helped pilot an offensive line that paved the way for the Phantoms to end the regular season on a four-game winning streak and return to the District 1 playoffs, where their season ended Friday with a 21-14 first-round loss to Marple Newtown.

“Roman leads by example, and he shows us every day what it means to show up and play football,” said Phoenixville coach Anthony Ciarlello. “When you do those things, you will have success regardless. The game is pretty simple; [coaches] complicate it. Roman reminds us to do the little things, take the right steps, and above all have passion.”

Leading by example includes pulling the team together – almost daily – and focusing the Phantoms on purpose. “What is our ‘why’?” asked Ciarlello. “Why are we here, what are we doing? Roman is the guy who reminds us of that. We have a goal of getting better, doing our jobs, and learning every day.

“We have a lot of young players, and his interactions have instilled the mentality they need to play football. Losing a guy like Roman is going to be hard.”

Dom Franks, LB/TE >> Owen J. Roberts: Franks didn’t arrive at Owen J. Roberts until his sophomore year, transferring in from Florida. He quickly made up for lost time.

“In all his time at OJR, I don’t think Dom ever missed a practice or an off-season workout,” said coach Rich Kolka. “He played JV as a sophomore, worked himself into a starting role, and now he’s one of our best football players.”

Franks’ ascent underlies one of the Wildcats’ team slogans “It takes no talent…” That’s not to say the two-way player doesn’t have talent – far from it. It’s just Kolka’s way of pointing out that Franks’ best qualities are the things that are learned, engrained in a person over time.

“Most things in life don’t take talent to achieve,” the coach pointed out. “They take hard work, they take determination. That is what I will always remember about Dom and what he brought to this program every day.”

Boyertown >> “It’s impossible to highlight just one senior,” said coach TJ Miller. “We had on-the-field playmakers, but the class itself has fought through so much these past few years. We had guys playing football for the first time who made immediate impacts, we had guys who’d given up the game and came back just to be a part of it in their senior year. Our kickers might be soccer-first guys but when push came to shove, they were football players as well.

“They came together from different backgrounds to play a game they love. They taught our younger guys how to play the game the right way. As a whole, it’s a class of exceptional young men, and I’m a better person for having had the opportunity to coach them.”

Perkiomen Valley saw its shutout streak end at 15 quarters of football, but the Vikings’ season continues after a 42-21 win over 11th-seeded Central Bucks East. Quarterback Ethan Kohler accounted for five total TDs, throwing twice to Ryan Klimek and once to Michael Poruban for scores and carrying a couple more in himself. CB East was within a score at the break, but by the early fourth quarter the Vikings had put it out of reach with Kohler’s two rushing scores plus another from Rasheem Grayson.

Now PV heads out on the road to No. 3 seed Coatesville this week, a rematch of a Week 2 clash that was one of the better games of the non-conference slate, if not the entire District 1 season as Coatesville rallied from a halftime deficit for a 35-27 decision. Prediction – this will be the best, most competitive contest of the second week of District 1 playoffs, regardless of classification.

Pottsgrove advanced to the District 1 Class 4A championship game with a decisive 34-12 victory over Upper Moreland. The Falcons rushed for 269 yards, caused three turnovers, and blocked a punt as they dominated all three facets of the contest. Vinny Scarnato and Max Neeson each accounted for a pair of scores, while Landon Shivak converted a pair of field goals with a long of 39 yards.

This week, it’s back on the road for the Falcons as they will travel to top-seeded Bishop Shanahan, a 21-0 winner over Chichester. The Eagles’ three losses this season are certainly no knocks on their pedigree, coming against the two Downingtown schools and Coatesville.

In Class 6A, Owen J. Roberts saw its season end against Perkiomen Valley’s next opponent, as No. 3 Coatesville turned a close game at halftime into a runaway, outscoring the Wildcats 28-0 after the break to win 48-10. Avrey Grimm’s sensational two-year run at OJR concluded with the running back amassing a total of 1,677 yards on the ground for 2021 and back-to-back league rushing titles. QB Michael Reed tallied the Wildcats’ only touchdown of the contest.

Spring-Ford couldn’t have come much closer to pulling off a stunning comeback at Kottmeyer Stadium, but ultimately fell just a few yards short in a 21-14 loss to No. 4 Downingtown East. The Cougars sprinted out to a 21-0 lead, but career nights from QB Ryan Freed (364 yards passing, 2 TDs) and Zach Zollers (147 yards receiving, TD) brought the Rams back within striking distance before a late blocked punt gave them a chance to tie or take the lead. Spring-Ford was turned away at the Cougars’ 5-yard line, however, as East survived a big scare from the visitors.

Over in 5A, Hayden Tenbroeck scored both touchdowns for Phoenixville in their 21-14 loss to Marple Newtown. After returning a fumble 81 yards for a score in the opening half, Tenbroeck added a highlight-reel grab in the corner of the end zone from Ty Romance, a three-yard scoring grab that served as a capper to his breakout sophomore campaign.

Upper Merion struggled to get things going against powerful No. 2 seed Strath Haven in 5A, dropping a 35-0 decision. Limited to 164 offensive yards, the Vikings were victims of three turnovers as their season ended at a record of 4-7.

Boyertown dropped the Eastern Conference championship game to Fleetwood, 48-35. The Tigers ran out to a 42-7 lead and held on late for the victory. Leo Egbe’s 166 rushing yards put him over the 1,000-yard mark in his final season with the Bears.