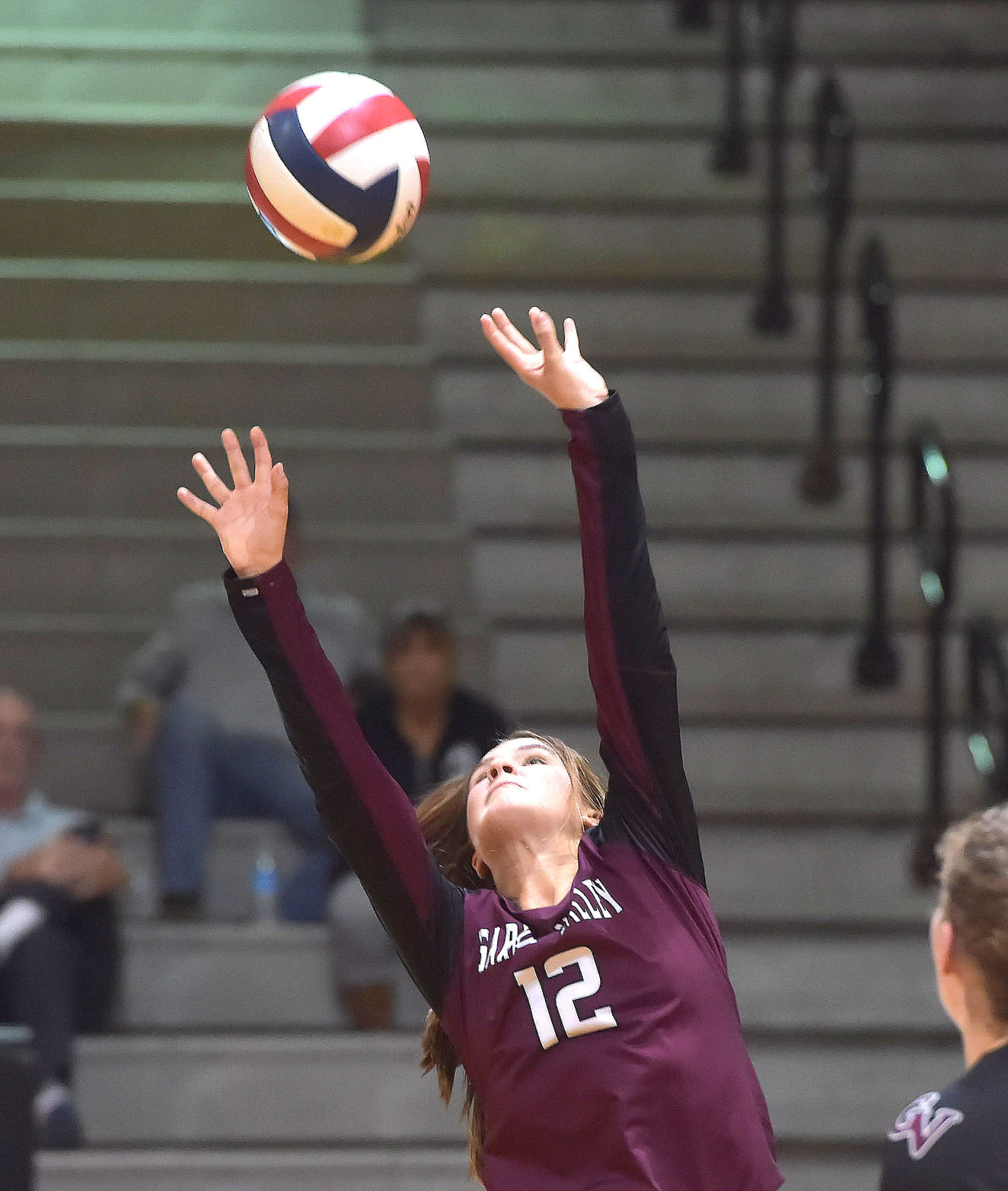 Archbishop Carroll has won six straight District 12 Class 4A volleyball titles and nine district crowns overall (one in 3A, two in 2A) since the Catholic League joined the PIAA in 2008. Yet this year’s district trophy did not come in as dominating fashion as the previous five.

That is something first-year coach Eric Van Horn has been making abundantly clear to his players.

“We kind of went into this year that this wasn’t going to be a Carroll beats everyone year, like it usually is,” Van Horn said. “We’re going to have to fight for some stuff.”

Instead of dominating the Catholic League, the Patriots (9-10) scraped to a third-place finish in the league and then fell to rival and eventual champion Cardinal O’Hara in the league semifinals. Yet that loss did not bring Carroll’s season to a close. As the only Class 4A team in the PCL, the Patriots had one last shot to make the state tournament for the sixth year in a row. Standing in Carroll’s way was undefeated Northeast High School.

Behind the play of first-team All-Catholic selection Paige Gibbons, third-team libero Tori Nocito and setter Maggie Quinn, the Patriots pulled out a hard-fought 25-20, 28-26, 25-19 victory to earn a first-round date at home Tuesday (3:30) with Garnet Valley, the fifth-place team out of District 1.

The Patriots and Jaguars (19-3) are no strangers. The teams didn’t play last year due to the coronavirus pandemic but met in five of the previous six seasons, with Garnet Valley coming out on top in three of those matches, including the last two.

The Jaguars are led by setter Maddie Wood and hitters Kelly St. Germain, MaryPearl Tienabeso, and Kate Dugery and Sarah Weins in the middle.

“I know they have a number of good hitters and their setter is really good,” Van Horn said. “I saw some stuff on her where she broke 1,000 assists as a junior, which is impressive. So it will be tough.”

York Suburban (23-1) was undefeated and ranked No. 1 in the state in Class 3A by the Pennsylvania Volleyball Coaches Association before a four-set loss to Spring Grove in the District 3 final. The Trojans won the District 3 crown last season and advanced to the state semifinals.

The Lions are led by seniors Bridget McGuinn and Maggie Doogan. McGuinn was the MVP in the Catholic League and Doogan was a first-team All-Catholic selection. The winner gets the winner of the game between District 11 champ Bethlehem Catholic and District 2 champ Berwick in Saturday’s quarterfinals.

Sacred Heart did not get a home game like the 31 other higher seeds in each classification, but this won’t be a long bus ride for the Lions. Sacred Heart (16-7) and Lititz (21-2), two of the top-ranked Class A teams in the state, square off in the first game of a doubleheader at Cardinal O’Hara (5 p.m.).

The Lions (16-7), who are ranked third by the PVCA, have won five straight District 1 Class A titles and 10 in the last 12 years. Sacred Heart knocked off previously undefeated Upper Bucks Christian to advance to the state tournament. Emily McKenna had 10 digs, nine kills and eight assists in the district final. Liz Cuskey added five kills and five aces and setter Annie Corcoran paced the attack with 24 assists.

Sacred Heart reached the semifinals last year before falling to Maran Catholic in five sets. No. 8 Lititz, which lost in the district final last year, rallied from a 2-1 deficit to beat Covenant Christian, 3-2, for its third District 3 title in the last four years.

Field Hockey
Garnet Valley (18-4) came up short in its quest for its first District 1 title, falling to Conestoga in the championship game, 2-1. However, the Jaguars were still rewarded with a home game in the first round of the PIAA Class 3A tournament. They will host Wilson (17-6), the No. 4 team out of District 3, Tuesday night at Moe DeFrank Stadium (7 p.m.)

This is the Jaguars’ second trip to the state tournament under Sandy Leiti. Garnet Valley qualified in 2019 as the fifth seed out of District 1. The Central League did not partake in the playoffs last year due to the coronavirus pandemic.

Garnet Valley has received solid midfield play from juniors Nicolettte Saccomandi and Theresa Ricci and strong defense from Natalie Ricci, while the goalie tandem of senior Maura Greek and junior Alana Poole have combined for 12 shutouts.

Senior Kayla Wilkes paces the Bulldogs (17-6) with 20 goals. Juniors Erica Culp (14), Catherine Arentz and Emma Staron (10 each) also have double-digit goals for an attack that averages 4.2 goals per game.

Archbishop Carroll rolled to its fourth straight District 12 title with a 12-0 romp over Northeast High School. The Patriots will face Hershey (10-10), the No. 6 team out of District 3, in the opening round Tuesday afternoon (4:30) at Arcadia University.

Carroll lost in the Class 2A final last season to Palmyra in overtime, 2-1.