Zeltt throws 3 TDs passes in 2nd half, North Penn pulls away from Neshaminy 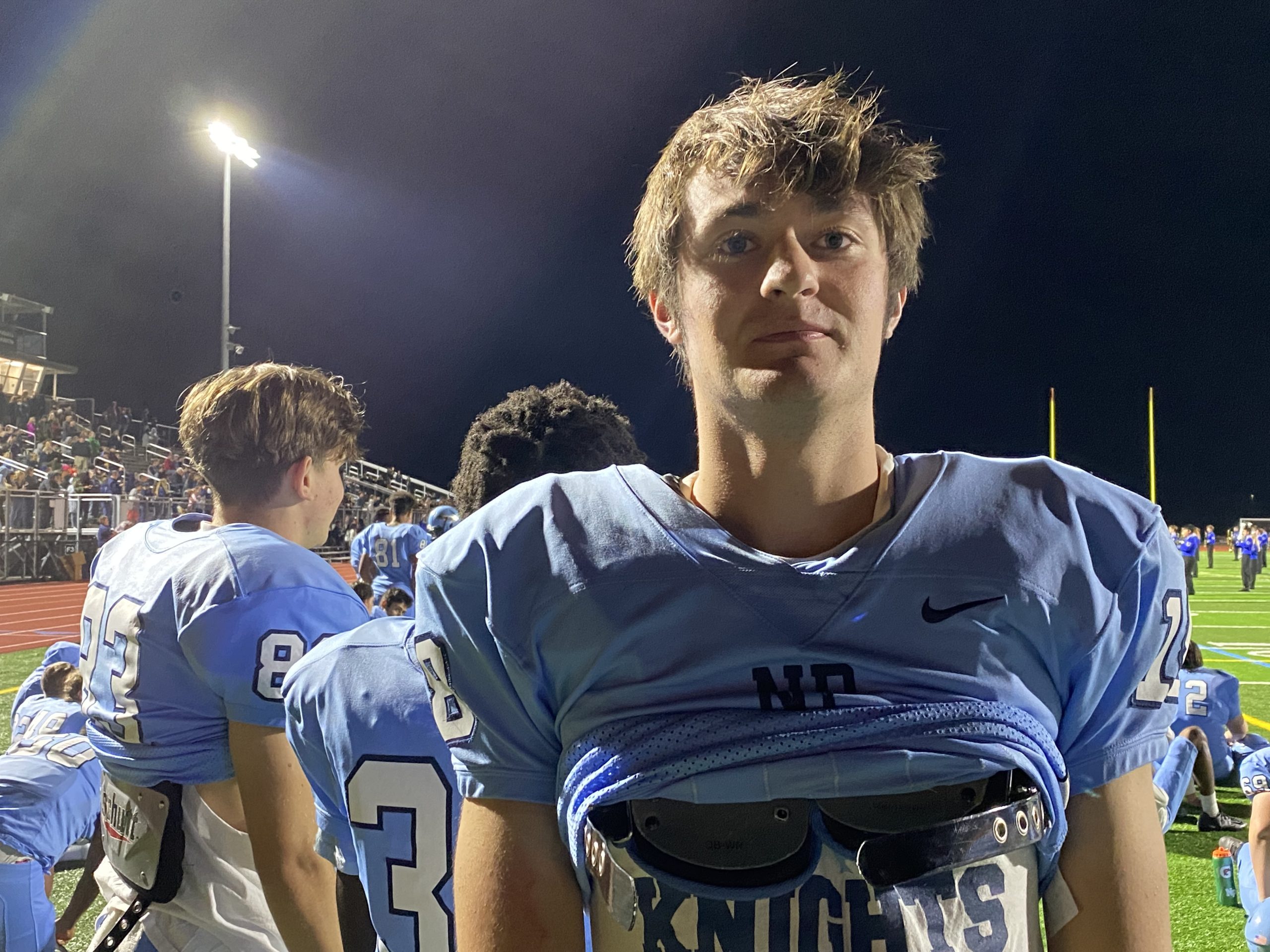 TOWAMENCIN >> With Neshaminy intent on slowing down running back Khalani Eaton, the North Penn football team needed Ryan Zeltt and the passing game to shake off the Knights’ slow start Friday night at Crawford Stadium.

“They know who’s in the backfield, everyone does,” Zeltt said. “And they’re bringing pressure and you got to gameplan for that.”

But late in the first half, it was the junior quarterback’s legs and not his arm that put host NP ahead. Zeltt found open space as scrambling to his right and kept going until reaching the corner of the end zone for a 17-yard touchdown run at a 21-14 lead with just 37 seconds before the break.

“That’s a rare sighting for me,” Zeltt said. “But yeah I saw some open field and I just took off and that happened.”

Zeltt was back to hurting a defense his more conventional way in the second half, tossing three TD passes as North Penn pulled away from Neshaminy and stayed perfect with a 42-21 SOL National victory on Homecoming.

“I thought Ryan did a nice job throwing some pinpoint passes and Levi (Carroll) with the ball in his hand is pretty good,” Knights coach Dick Beck said. “I thought for the most part we protected pretty good too when we were in passing situations.”

Zeltt was an efficient 14-of-18 passing for 227 yards – most of that coming on connections with Levi Carroll, who caught seven passes for 142 yards and a touchdown.

Eaton, meanwhile, still had a good night despite a solid effort front the Neshaminy defensive front, rushing 20 times for 117 yards and two touchdowns while also adding a TD reception in the third as North Penn (6-0, 4-0 conference) avenged last year’s 35-19 defeat that was the Knights’ lone loss of 2020.

“Not sure I feel like we got revenge but we’ll take the win,” Beck said.

Quarterback Nunzio Zydzik was 6-of-10 passing for 170 yards and three touchdowns and also ran for 42 yards on 11 carries for Neshaminy (1-5, 0-4), which lost its second straight. Markus Bennett had 71 yards on eight carries.

#FOOTBALL: @NorthPennKnight QB @RZeltt rolls & finds @Levi12Carroll, who eludes a tackle attempt & dives into the end zone for a 24-yard touchdown to put NP up 42-21 with 11.9 seconds left 3Q. pic.twitter.com/1Xab0Nudyz

Both teams are on the road for their next games Friday – the Knights staying in conference to take on Truman while Neshaminy faces undefeated Quakertown in a SOL crossover matchup.

“Just don’t feel like we’re super-crisp on offense right now,” Beck said. “So I think we need to concentrate a little on offense this week.”

One of Zeltt’s few off-target throws came on the first play of the third as he was intercepted over the middle by Joel Bonner – the pick setting Neshaminy up at NP 25 trailing by just seven. But the visitors gave the ball back on the next snap as a fumble on a handoff was recovered by Luke Cody in the backfield.

“It was a blitz, me and the outside linebacker go blitz outside and then it was just misunderstood by the running back and the quarterback,” said Cody, a junior linebacker/tight end. “I see the ball come out and jump over it, get the fumble.”

“There’s a tight end screen play to me – that’s the only play I have,” Cody said. “And then it just kind of worked, I guess.”

#FOOTBALL: @NorthPennKnight’s Luke Cody catches a screen pass from @rzeltt and follows a bunch of blockers to score a 22-yard touchdown on 3rd & 12 for a 28–14 lead 5:12 3Q vs. Neshaminy. pic.twitter.com/9KvCVFc0JH

Neshaminy began the ensuing drive at its own six and on the opening play the ball popped free with North Penn’s Ronnie Major recovering the fumble at the 16. On 3rd-and-8, Zeltt threw a short pass to Eaton, who turned upfield and scored from 14 yards out at 4:00, putting the Knights up 35-14.

“We were struggling, defense was slowing down, we just we’re awake,” Cody said. “But second half we woke up and we just felt good and took the dub.”

Neshaminy answered with a two-play, 69-yard drive capped by Nick Buckys catching a pass from Zydzik, powering through a tackle attempt then racing away for a 52-yard TD at 3:11.

But North Penn regained the 21-point advantage on the next series – Zeltt rolling right and hitting Carroll, who eluded a tackle try then dove into the right corner of the end zone for a 24-yard touchdown with 11.9 seconds left in the third.

“I think everyone knows who Levi is too and they know he’s a big play guy,” Zeltt said. “We were running the ball then we got them with the little screen passes and all that stuff. Whenever I give him the ball in open space, I know he’s going to break that first tackle and get to the second level.”

After blocking North Penn’s 23-yard field goal try in the first quarter, Neshaminy took a 7-0 lead when Zydzik’s toss from the left sideline was hauled in by a diving Colin Schuckert-Tohm near the front corner of the end zone for a 30-yard touchdown  at 10:54 in the second quarter.

The Knights pulled even with a seven-play, 70-yard drive finished by Easton taking a pitch right and working through a crowd for a 29-yard touchdown run at 6:40.

North Penn went up 14-7 less than a minute later after recovering a fumble near midfield on the following kickoff. Zeltt connected with Carroll for 43 yards down to the five and on the next play Eaton scored a tough run at 5:57.

But Neshaminy responded with a 10-play, 80-yard drive, knotting things at 14 with 1:43 left before halftime when Zydzik found a wide-open Dayvon Tinsley down the middle for a 27-yard touchdown.

Carroll’s 42-yard kickoff return set the Knights up the Neshaminy 37 and four plays later Zeltt scrambled right for a 17-yard rushing TD with only 37 seconds to go before halftime, giving North Penn the lead for good.