CB West’s stand the difference in duel with Pennridge 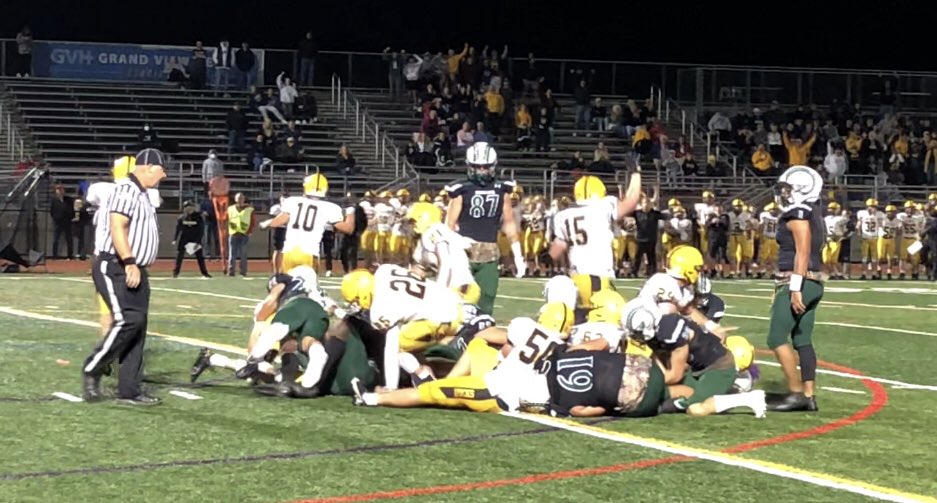 EAST ROCKHILL >> The entire stadium knew what was coming, it was a matter of which side emerged on the right side of it.

Facing a 4th-and-3 on Central Bucks West’s 12-yard line, the Pennridge offense lined up trying to move the sticks as it drove for a go-ahead score on its Homecoming night. On the other side, the  Bucks defense knew the ball was going to Phil Picciotti and after trading punches with the Rams all night, wanted to get the stop.

Donte Mancini got there first, Jeremy Goldrick and others soon followed and the Bucks got the stop, outlasting Pennridge 28-24 at Helman Field on Friday for their fifth straight victory.

“We’re incredibly scrappy, we fight hard and don’t stop. This team is incredible,” Goldrick, a senior tight end/linebacker and co-captain, said. “I’ve never been a part of something like this. The group is incredibly tight-knit and we just battle together.”

Mancini, a senior running back/safety who rarely takes a snap off, almost didn’t want to admit it postgame, but he was the first one in on the game-deciding tackle after rushing for two scores already on the night.

“We’re not the biggest but when we get to the field, we’re bringing it to you for 48 minutes,” Mancini said.

Friday’s clash played out like an old naval battle, with two ships slugging it out at close range until one of them finally cracked and sank. Both the Bucks (5-1, 3-0 SOL National) and Rams (3-3, 2-2 SOL National) are teams built on their strong running games and defenses that fly to the ball, so there was a lot of that going on at Helman Field as the teams combined for 87 rushing attempts and most plays ended with a hard hit from a defender.

The finale wasn’t West’s first fourth-down stop of the game. On the very first drive of the game, West stuffed the Rams right at midfield to get their first touch on the ball. That first touch went for a score when Eli Boehm took it 50 yards for a touchdown to start a wild first quarter for two defenses not used to giving up a lot of points.

Giving and taking punches all night was just fine with the Bucks, who have not lost since their opening week setback against Coatesville.

“It shows the identity of this team,” Goldrick said. “We’re going to go 12 rounds like a heavyweight boxing match, it’s going to be a fight no matter who we play.”

Pennridge only needed one play to tie the game, with Nate Mossbrook going 77 yards on a single rush to tie it 7-7. Sean Curry booted a 28-yard field goal to put the Rams in front 10-7 briefly, but Mancini’s first rushing score restored West’s lead at 14-10 on the following drive.

It was the second straight setback for Pennridge, which has been outscored by a total of 18 points in its three losses and has yet to lose by more than a touchdown.

“When we need it the most, we have to start stepping up and making a play,” Rams coach Cody Mueller said. “We came up short and feel like we left one out there tonight.”

Pennridge’s defense came up with a big play early in the second quarter that helped the Rams take a lead into halftime. After a miscue on a snap led to a CB West fumble deep in their own end, Rams linebacker Dylan O’Brien scooped up the loose ball and returned it down to the three, where Brayden Landherr took it home on a toss play a few snaps later.

“Our kids faced adversity the whole game and did a good job, but we played exactly like we practiced yesterday,” Mueller said. “We told them if they want to play better, they have to practice better. We have to figure it out and we figure it out by going back to practice, correcting what we need to and playing good football.”

West received the second half kickoff and much like it did in the game against CB South that started this winning streak, put together an emphatic opening drive. The Bucks went 63 yards, all on the ground, over 6:14 and capped the drive when Mancini went in from two yards out for his second touchdown of the night.

“We said in the huddle, ‘we can’t stop now, this is who we are,'” Mancini said. “Ultimately, they couldn’t stop us. We executed on every play and got the results. That’s CB West football.”

Pennridge upped the ante, going 80 yards on its first drive of the second half and re-taking the lead when Xavier Dantzler hit Adam Mossbrook for a 15-yard touchdown after a lot of tough running by Picciotti, Tyler Wetzel, Landherr and Brennan Fisher helped move the ball down the field.

Possessions were at a minimum after halftime, so each drive took on more and more importance. Getting the ball back after the Rams had gone ahead 24-21, the Bucks started to again march their way down the field mixing carries between Boehm, Mancini and Vinny Cherubini until they faced a 4th-and-1 from the Rams’ two.

Quarterback Ganz Cooper kept it, and behind a good push from the guys up front, he not only got the first down, but seven points as he plunged into the endzone.

“It starts with our execution every day at practice,” Mancini said. “We come in and we don’t mess around. We’re there to do our jobs and stay consistent and that’s what our success is based on.”

In a game that felt like the last team with the ball would win it, the Rams started on their own 20. Good running moved the ball up the field until the drive started to stall just inside the redzone to bring up the deciding play.

With the entire stadium knowing what would come next, it was simply a matter of who got where they needed to first.

“That’s our identity,” Goldrick said. “We gang-tackle, we fly to the football. It’s what we do.”

This time, it was CB West.

“In the huddle on previous plays, Jeremy, myself and other guys, we just reinforced you have to go after it hard and that will determine your ability to get a stop,” Mancini said. “If you go 100 percent, 100 miles per hour, that’s when good things happen.”