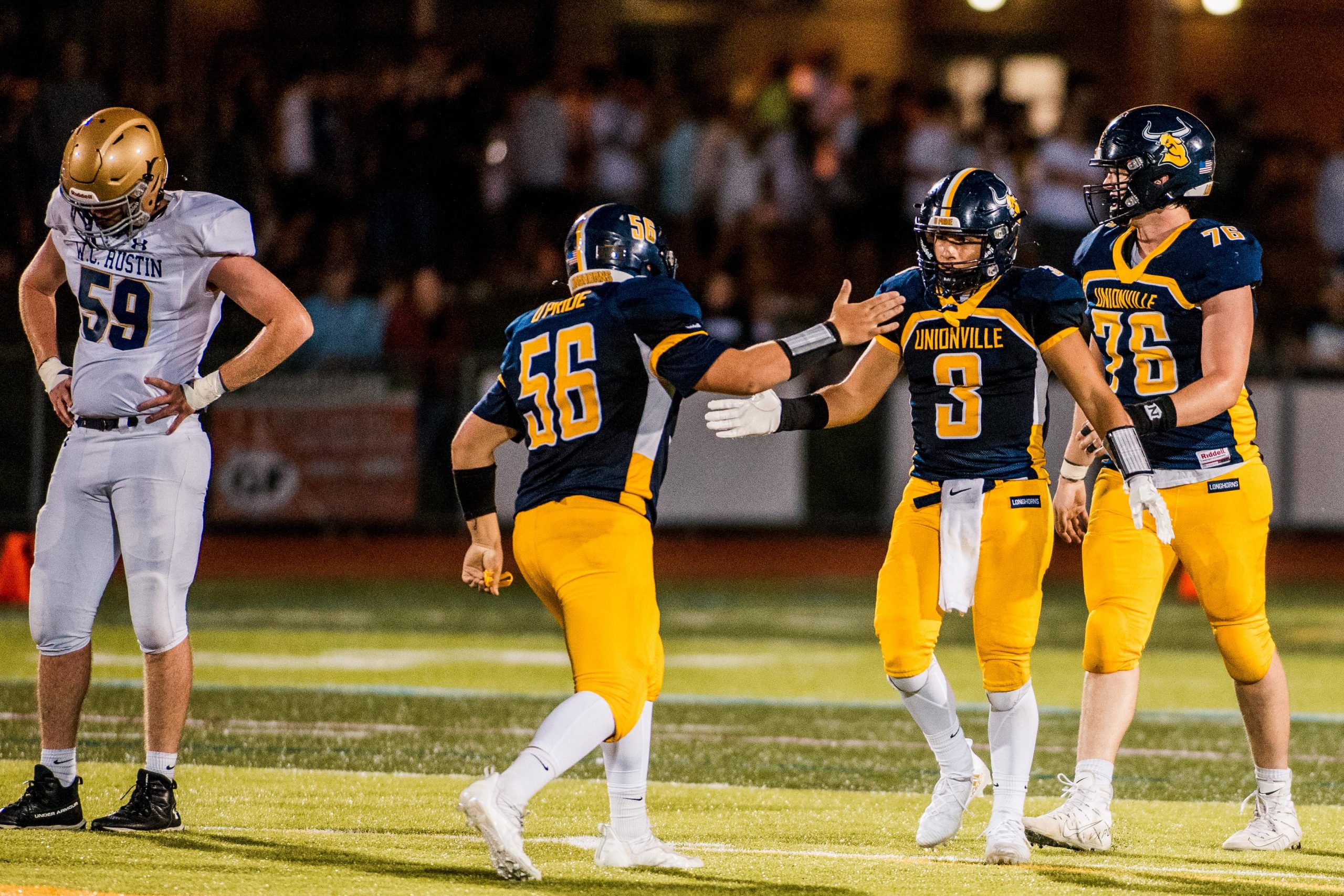 Unionville's Brendan D'Amico, right, and Danny Dunphy celebrate after a tackle in the backfield against West Chester Rustin. (Nate Heckenberger - For MediaNews Group)

GLENOLDEN — Unionville traveled East to Delaware County for the second consecutive Friday and the Longhorns found their latest jaunt across county lines to be a little less than hospitable.

After battling traffic to get to the South Avenue Athletic Complex, Unionville was not exactly welcomed with open arms as Interboro came out fired up and ready to brawl. Ultimately, the Longhorns walked away with a hard-fought 20-19 victory that coach Pat Clark thinks will help his squad down the line.

“I think – to this point – that is the most physical team that we’ve played. Their record is deceptive,” Clark said of the Bucs. “I have a lot of respect for them. Having coach coached in Delaware County, I know that Interboro’s football tradition is among the best. We wanted a game and they gave us one.”

From the outset, it could be seen that Interboro was playing with an edge. First half touchdown runs from Billy Kyle and Abu Kamara (97 yards) put the Bucs up 13-0 early, but Unionville eventually shook off the cobwebs from its traffic-induced lethargy.

Before the first half was over, though, Interboro had one more trick up its sleeve: Zakee Brooks.

Brooks (69 yards receiving) had already established he was going to be a huge problem for the Longhorns and he proved it again with a 27-yard touchdown reception from Julian Bulovas to put the Bucs up 19-7 heading into halftime.

Still, that lead was not enough to hold off Unionville in the final 24 minutes.

“We played two really good football teams back-to-back and have another one next week. Our kids are the toughest kids around. We felt like we were the better team, but we ran out of gas at the end,” said Interboro coach Dennis Lux, whose Bucs suffered a one-point loss to Chester last week. “Every single day we have to buy in. I know my kids are going to run through a wall for me, so I don’t have to worry about that part. We’ll play with pride and if we get just a little bit better every week, well start to win some of these games.”

Unionville running back Brendan D’Amico played a huge role in helping McCloskey guide the offense as the Longhorns mounted their comeback.

“It’s especially nice because it was a come-from-behind victory,” D’Amico said. “The team really rallied at halftime and it came down to execution at the end of the day. Interboro kicked our butts in the first half. The second half came and we had a good talk in the locker room.”

D’Amico (56 yards) was the featured back during Unionville’s first drive of the third quarter, which ended in a two-yard scoring run. Later, McCloskey added another touchdown, while the Longhorns defense pitched a second half shutout.

“Brendan is a senior and a captain. He’s had an older brother here, a younger brother. They’re one of our families,” Clark said. “I can’t talk highly enough about our kids, how much they care, and how much they put in. We had a bad half because (Interboro) made us have a bad half. We talked about how each game of the season is a different experience and here we were for the first time having to dig out of a halftime deficit.”

Wissahickon QB Aidan Defeo does it all in win over New Hope-Solebury
Not looking ahead, Ridley takes of business with Radnor rout