Not looking ahead, Ridley takes of business with Radnor rout 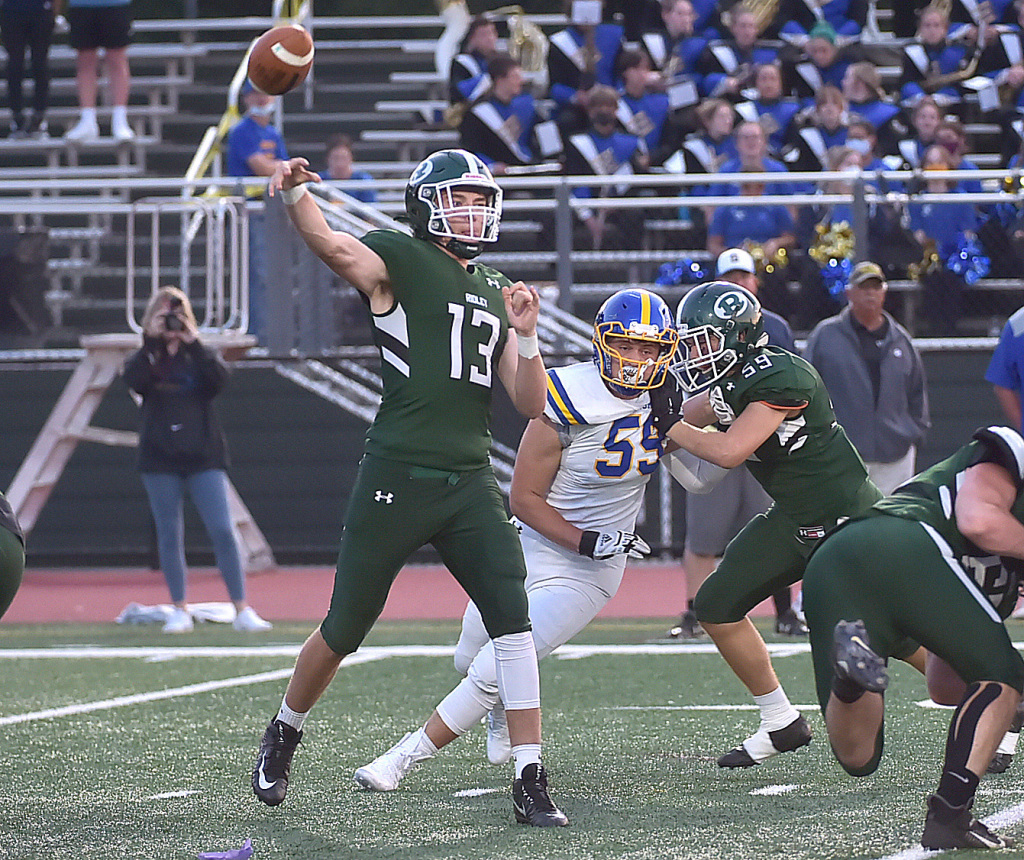 Ridley quarterback John Heller, throwing a pass in a win over Springfield, threw three touchdowns and ran for a fourth in a 45-14 win over Radnor Friday night. (PETE BANNAN-DAILY TIMES)

The only question: Would he be able to beat an unofficial deadline?

By Friday, when they defeated Radnor, 45-14, at Phil Marion Field, the Green Raiders had met their unstated goal. There they were at 4-0 in the Central League and ready for a visit from unbeaten Garnet Valley in the latest first-place showdown in a decades-long series of such challenges at Phil Marion Field.

“We’re looking forward to it,” said quarterback John Heller, after passing for three touchdowns and running for another. “Garnet has been one of the best for the past, who-knows. We haven’t been the best over the seasons.

“But the thing is, we’re the best we’ve been in a while.”

Early in the season, it was evident that Ridley would be a handful on defense, as it was again Friday, three times stumping the Raptors (1-4, 1-3 Central) in the red zone. The offense, though, might’ve taken a while longer to develop.

Behind the big-play potential of Mills, it has developed.

“It’s been our motivation,” Mills said. “And we just have that chip. We’ve always been getting beat. We’ve always been the underdogs. But this year, we just want to win. We want to be the best. Tonight, we were doing it all, in the air and on the floor.”

Mills gave Ridley an early lead, slicing through the Raptors for an 18-yard touchdown. Radnor, however, answered on the ensuing kickoff, hinting at a handoff, then setting Tommy DeShan loose for a 75-yard TD.

A couple of second-quarter Heller scoring passes to Paul Jackson provided Ridley with some separation. But Radnor quarterback Jude Wallin kept it tight with a tough, 15-yard keeper for a score.

A 42-yard Mills burst helped put Heller in business for his touchdown with 4:21 left in the half, but Radnor again stirred when Damien Falcone reached the Ridley three with a 37-yard reception. The Green Raiders, though, didn’t break and led, 28-14, at halftime.

“We’ve got to finish when we’re in the red zone,” Radnor coach Tom Ryan said. “It’s really that simple. As I tell them, I never question how hard we play. Our kids played hard. We just made some mistakes. You’ve got to score when you’re inside the 20 and unfortunately that didn’t happen.

So it has begun to appear, even if as somewhat of a surprise.

“It’s really remarkable where we are, because coming into the season, we only had three starters back on offense and two starters back on defense,” Wood said. “And we had a brand-new kicker. So it was a revamping on both sides of the ball.”

That kicker, senior Nick Volpone, was 6-for-6 on PATs and gave Ridley a 31-14 lead with a 33-yard third-quarter field goal, set up by a 28-yard Kimir Stephenson reception.

“I was afraid some of our kids would be looking ahead,” Wood said. “But they didn’t.”

So, next up: A potential classic at The Phil.

“I was focusing on this game,” said Mills, denying he’d heard the many PA updates from Garnet Valley’s victory over Strath Haven. “But now, I am really locked into it. I am already ready for next week.”