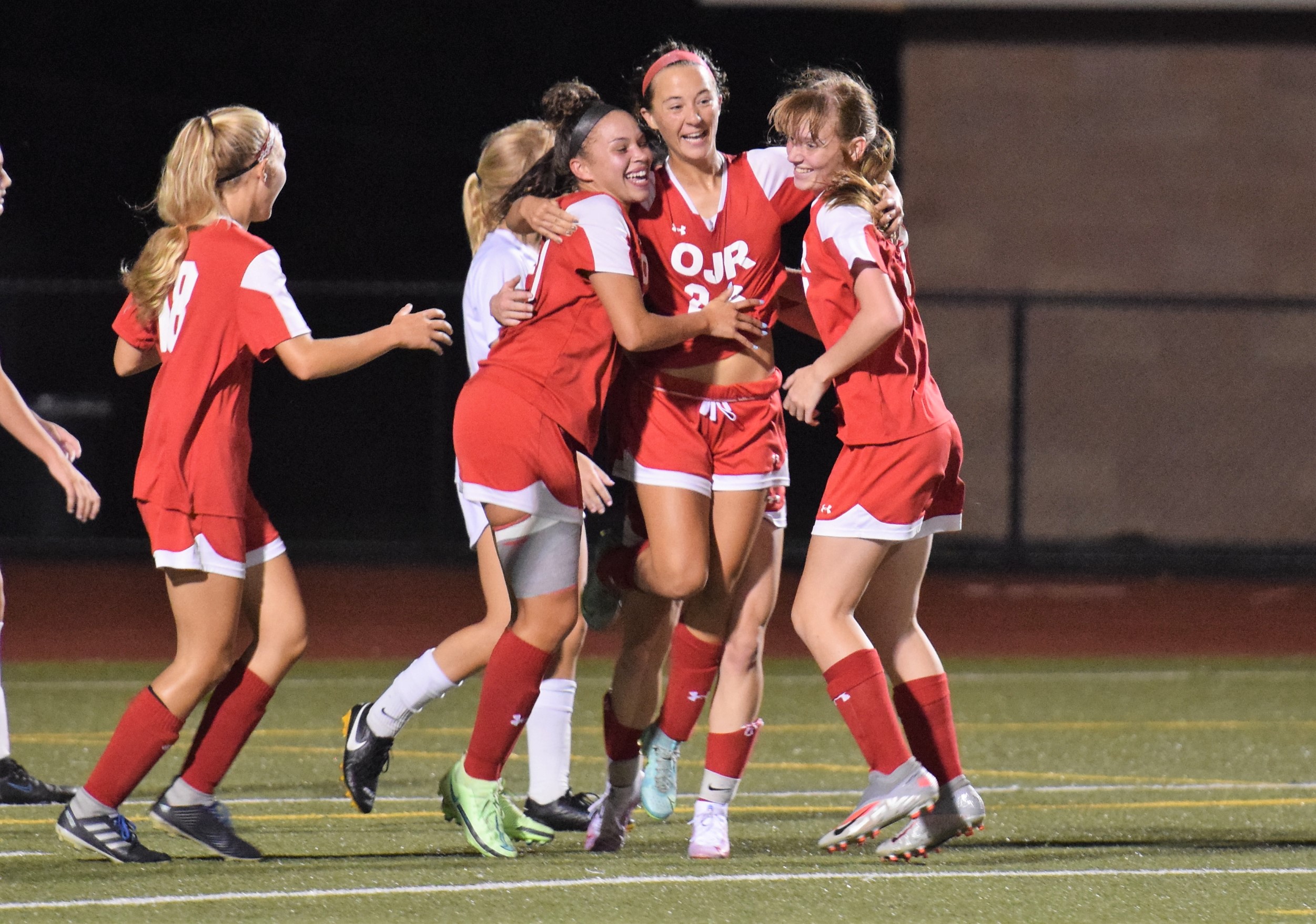 Teammates congratulate Olivia Thompson (26), center, after she scored in the second half against Spring-Ford Thursday. (Austin Hertzog - MediaNews Group)

Every younger sibling can relate.

Sometimes you just want to be better at something than your older brother or sister.

Olivia Thompson knows all about that, which is a good thing for the Owen J. Roberts girls soccer team.

That sibling rivalry is what helped Thompson and her Wildcats team to a 1-0 victory over rival Spring-Ford in a matchup of the 2020 Pioneer Athletic Conference co-champions Thursday night at Wildcat Stadium.

Thompson, a junior midfielder, scored the game’s lone goal on a header following a 40-yard free kick from the right side by senior defender Mo Weaver at the 22:17 mark of the second half. Weaver’s kick into traffic in front of goal was only partially punched by Spring-Ford freshman goalkeeper Olivia Neild and Thompson coolly cushioned her header into the net.

“I felt that we had to get in there and pressure their keeper,” Thompson said. “We felt that if we could keep pressuring her we’d get one.”

The Wildcats can give an assist to Thompson’s older sister Caroline – a 2018 OJR grad and member of the Drexel women’s team currently recovering from an ACL injury – for being a high-level soccer player and not-so-high-level header of the ball.

“Everyone always says my sister is a bad header so I always wanted to be a good header just so I could be better than her at something,” Olivia Thompson said.

‘She’s our header,” Weaver said. “Oh yeah, she’s scored off of corners, she gets in there.”

Weaver, alongside center back partner Rachel Sbei and outside backs Kaleigh Bold and Ashly White and defensive midfielder Gabbi Koury, limited the Rams’ attack throughout and allowed just one shot on a goal while earning freshman goalie Rachel Epps the shutout.

The win keeps OJR out in front of the PAC Liberty Division race while upping its record to 7-0-1 (5-0 PAC Liberty).

Spring-Ford fell to 6-3-1 (2-2 PAC Liberty) as it navigates life with a largely new lineup compared to last year’s District 1-4A finals team. Despite the hits from graduation and injuries, the Rams acquitted themselves well against OJR behind the leadership of returning Mercury All-Area Player of the Year Liv Curry, a senior center back bound for Wisconsin.

“We are young and we’re a team learning on the fly,” said Rams second-year head coach Tim Raub. “A part of me looks at four overtime games in five matches and thinking we could have dead legs, but if anything it has taught us to battle. It’s been getting some of our kids an education on the run and that’s all we can hope for.

“We had a game plan and I thought we executed it well. Unfortunately we didn’t create enough chances and at the end of the day that’s the biggest thing.”

The marquee matchup was Curry up against OJR junior forward Alexa Vogelman, a returning All-Area first team pick and the PAC’s leading scorer with 11 goals in six games. Curry won the battle keeping Vogelman off the scoresheet and contributing to the striker shifting into the midfield in the second half to get some distance and contribute in the absence of Sabrina Marks who went out with an injury in the first half.

The Wildcats were the better team in the first half with their possession and tempo but were largely matched in intensity in the second half by the Rams, who also got strong shifts from senior midfielder Reese Kershner (seeing her first action of the season), sophomore Ally Garvy and freshmen Molly Kennedy and Ava Hissong.

Another freshmen, Nield, the backup to injured starter Erika Eickhoff, did well in an eight-save performance.

“I told them at the end of the game, ‘Be disappointed with the result. Don’t be disappointed with your effort,’” Raub said. “We’re a team that here early in the season people have been looking at us like we’re down and out. Here we ran shoulder-to-shoulder with them. We did everything but put the ball in the back of the net, and that’s going to come.”

It’s the Rams now leaning on some underclassmen, a path the Wildcats know well after starting a lineup of six underclassmen two years ago.

That path is now paying off in OJR’s unbeaten start and status as PAC frontrunner.

“Two years ago we were a good team and had a chance to be great, but we were so young,”
Thompson said. “And last year, when we beat Spring-Ford it was like everything started to happen. Now we’ve come together. We’re all super close.”

The closeness of the group is one of its greatest traits according to head coach Joe Margusity.

“In order to have a successful team the kids really need to like each other. The more they like each other, the more success they have,” he said. “Like the commercial says, ‘Who’s got my back? I got your back!’ and that’s how it is with this group.”