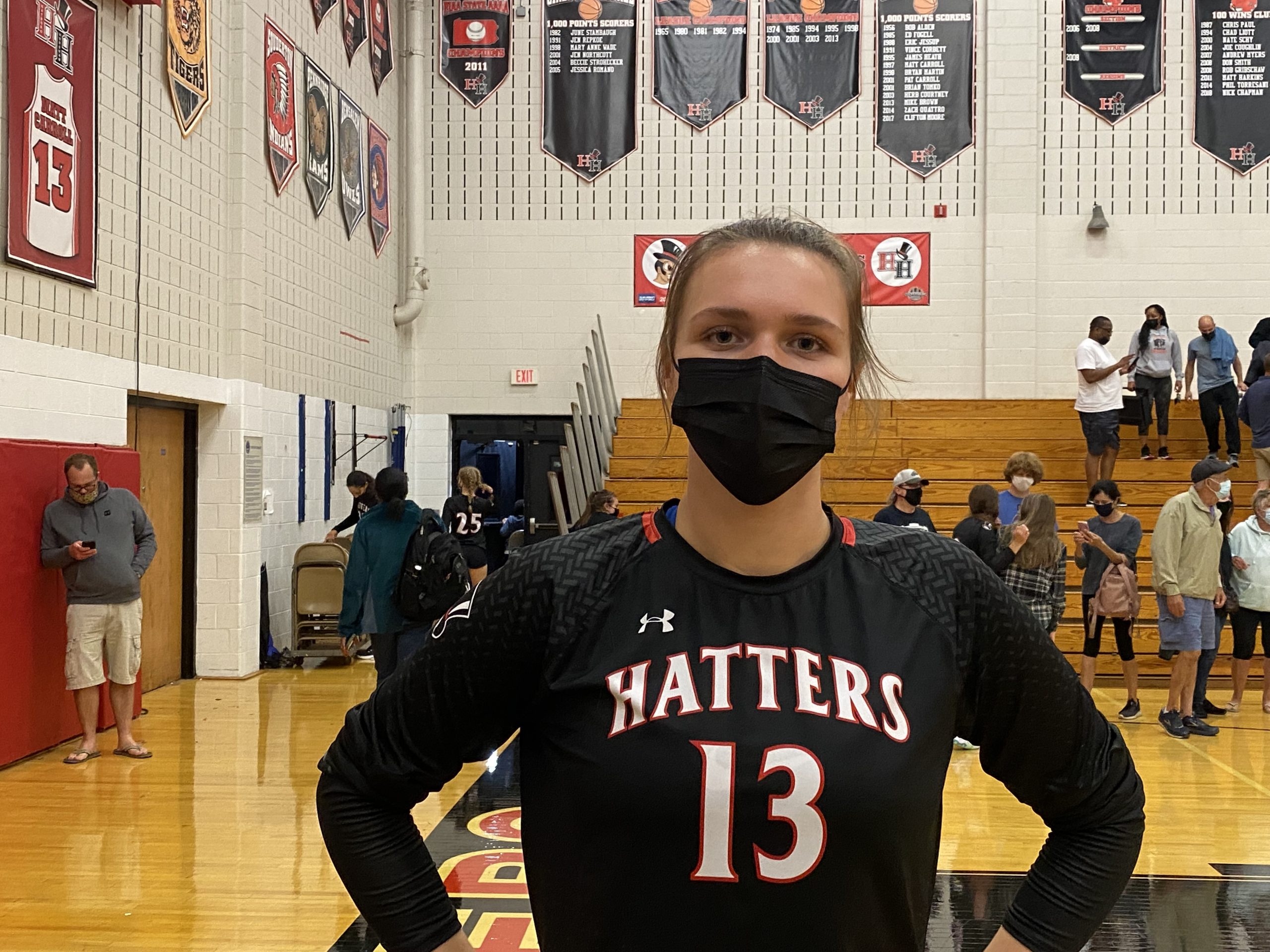 HORSHAM >> The Hatboro-Horsham girls volleyball team could not avoid its tendency for slow starts Thursday night, the Hatters finding themselves trailing 7-5 early in the first set to visiting New Hope-Solebury.

But it did not take the Hatters long to go from sluggish to speeding away, quickly erasing the Lions’ lead with six straight points – the beginning of a 20-5 run that gave the home side the opening set.

“I think cheering each other on has always been the easiest way to keep each other up and the energy and stuff like that,” Lauzier said. “That’s why it’s like during practices it’s really hard to keep energy up because it’s not the same especially when you’re playing against people and you want to show them that you’re more strong-willed than them.”

Hatboro-Horsham jumped out to a 7-0 lead and cruised in the second set then pulled away for another comfortable win in the third to complete the sweep, staying undefeated with a 3-0 (25-12, 25-10, 25-14) Suburban One League American Conference victory.

“My coach says come in, play at our level and leave,” Hatters senior setter Grace Howard said. “Just be respectable with how we play and how we want to be perceived is how we play every game no matter what.”

“I was feeling pretty good,” Lauzier said. “I was pretty confident, started out with the first two kills so that made me happy. I the game went on, I would say everything was still up pretty good then one bad against me saying I was in the net – which I wasn’t, but it’s fine so that annoyed me and it definitely made me more angry. But it also made me wanted to get more points.”

“This is the first team I’ve played with the biggest hitters so it’s really fun cause it makes me look like a really good setter,” Howard said. “Cause they just like pound everything down so I really like it.”

Graduating their defensive core from last year’s side that won a third straight SOL American title and reached the District 1-4A quarter finals, the Hatters needed to switch up how to slowing down attacks while on offense are forcing opponents to deal with the height of outside hitters Tsetsko – an all-state selection in 2020 – and Jones along with middles Lauzier and Bombas.

“All five DSs (defensive specialists) and two setters and five out of six of my starting servers so our serving is new, our defense is new, our serve/receive is new,” Hatboro-Horsham coach Jon Young said. “But we kind of changed our approach from instead of we’ve had a few stars in the past defensively, instead of leaning on those stars we’ve kind of invoked a team defensive process.”

Hatboro-Horsham is back on the court Friday visiting Council Rock North for a SOL nonconference match at 5 p.m. The 8-0 Indians are fourth in the District 1-4A rankings with the Hatters are just behind in fifth.

“I’d say right now the next step for this team that we haven’t gotten to yet was that state level,” said Young, in his seventh season at HH. “And we’ve been close, we’ve been one match away four times and I think this team can complete at that level, the question is how does it lay out, we had a tough spot last year with (Bishop) Shanahan and Unionville in the same angle (in districts).

‘But we’re doing what we can to get better right now and finding was to compete within our own gym because sometimes it can be tough depending on the conference or whatever the case may be.”

New Hope-Solebury (4-2, 2-1 conference) led twice in Thursday’s first set, the second time at 7-5 after winning consecutive points. But Hatboro-Horsham responded by taking the next six and never trailed from there. The Lions cut the margin to 11-8 before HH posted three straight points to go up 14-8 on an Ava Santo ace.

“One thing that our setter has done a really good job of is figuring out like obviously Jade had a very nice night, when she sees who’s having a night she tends to have a good eye and let’s make sure we get this person the ball,” Young said. “But I mean even our opposite today Cassidy (Hudson) hit well so we’re excited about our offense we just need to make sure we can keep using that offense.”

In the third set, the Lions knotted things at 10 after a three-point burst only for Hatboro-Horsham to rip off six straight. New Hope-Solebury sliced its deficit to four at 17-13 but the Hatters finished the sweep by taking eight of the last final nine points. A Tsetsko kill made it match point at 24-14 while Santo capped a 6-0 run with an ace.