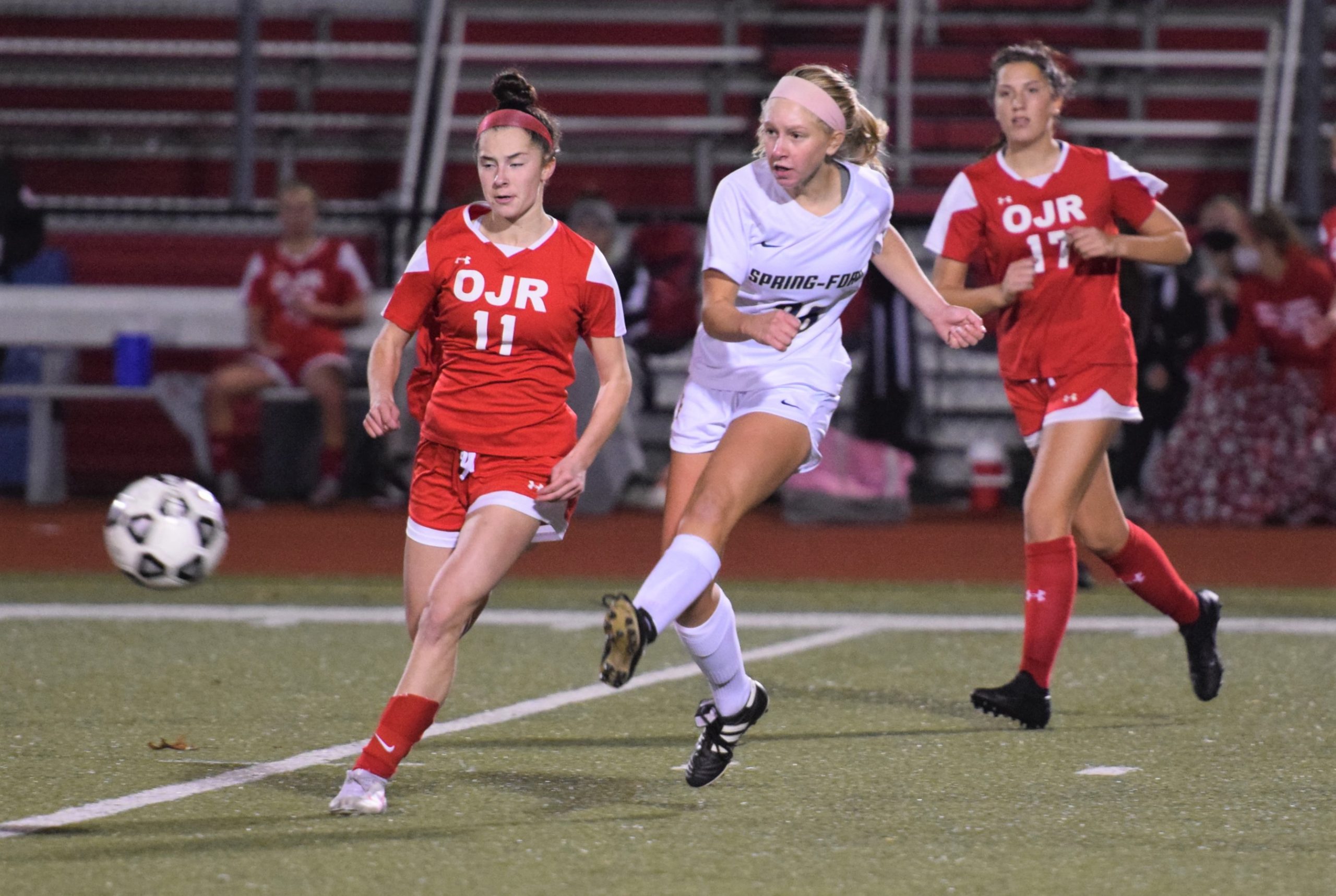 Outlook: The pendulum has swung in opposite directions the past two seasons at Boyertown. For all the good fortune of the 2019 PIAA 4A championship season, things went the other way in 2020 with injuries plaguing the top returners in a 4-7-1 year and fifth-place finish in the 7-team pandemic-altered PAC season. This fall should bring more of a return to the norm, which is Boyertown performing in the upper tier of the PAC. Junior Sam Devlin is the lone returning All-Area performer (second team in 2020) but there are new names ready to step up. Look for the Bears to be in the mix for a PAC playoff spot and push for a return to the district playoffs.

Outlook: The Warriors had their first winning season since 2010 during last year’s COVID-altered season and now they’re hunting for more. With the majority of the lineup returning and ‘a ton of varsity experience at almost every position’ according to coach Bret Smith, there’s reason to believe Methacton can make it so. All-Area second team defender Lizzie McNichol heads the list of returnees, alongside honorable mentions Ruby Murray, Kirsten O’Brien, Molly Rowland and goalkeeper Mairi Smith. Spots of inconsistency troubled the Warriors last season, a focus of correction in 2021. “We would play a really great game against a tough team, and then follow it up with what probably wasn’t our best effort,” Smith said. “If we can play every game the way we are capable of, we should have a very successful season.” Methacton last year was the only team to get results against both PAC heavyweights Spring-Ford and Owen J. Roberts, a sign that it can be a contender for its first trip to the PAC playoffs. Methacton missed out on the modified district playoffs last year, which is a source of motivation this fall. “The girls all feel they kind of got robbed of that playoff experience, and are really motivated to make sure they get in this year,” Smith said.

Outlook: Norristown will appreciate a traditional season as much as anyone after last year when the fall season was cancelled due to pandemic precautions and a spring season as part of the United Ten league was extremely limited. With a lost year and new coach trying to bring the team together, the wins probably won’t be plentiful for the Eagles. But just having a season and having the chance to compete is an upgrade for Norristown.

Outlook: A season after fielding a super-young lineup and having the mixed results to match, OJR came of age in 2020. The result was a share of the PAC championship with Spring-Ford and a 10-2-1 record. The Wildcats must replace All-Area performers Emily Sands (Kutztown) and Sarah Kopec, but otherwise return the bulk of the 2020 squad. The group is led by three-time All-Area first team defender Morgan Weaver, a Boston University commit, along with the PAC’s top-scoring forward Alexa Vogelman and standout holding midfielder Gabbi Koury, both juniors. With Weaver and outside backs Kaleigh Bold and Rachel Sbei returning, it will help the transition for new starting goalkeeper Colby Wasson. All together, it makes the Wildcats the favorite in the Pioneer Athletic Conference and a team that appears capable of a deep postseason run.

Outlook: Perk Valley is often known for its defensive prowess, which suits it in 2021 with a strong center back duo leading the squad in juniors Rylie Pinkerton and Emma Stankunas (All-Area second team in 2020). “(They) bring skill, leadership, and experience; each logged a lot of minutes last year and are the heart of our team,” said coach Kim Paulus. PV has also benefitted by the addition of junior Maddie O’Donnell, who transferred from Spring-Ford after being the starting left back of the Rams’ district final team. Contending for a PAC title will be a big ask, but the Vikings are playing the long game. “Our goal is always to improve. We want to get better every day and year to year,” said Paulus. “This group is very much aware that we are building for the future, too, and are approaching this year with a positive growth mindset.”

Outlook: The Phantoms enter the year with confidence on defense with returning multi-year starters in goalkeeper Ella Stout and defenders Natalie White and Catherine McNamara. “We will be dependent on those core players keeping us in games,” said coach Stew Sherk. The other end of the field brings much more uncertainty though. “We have struggled to find the back of the net,” Sherk said. “We are hopeful we can be creative and have players step up to get us where we need to be. But our defense and goalkeeping should keep us in some games.” Phoenixville should figure into the middle of the Frontier Division and will need to get a few results as an underdog to reach its goal of qualifying for the District 1 tournament.

Outlook: The Golden Panthers’ pandemic-delayed start to the 2020 season resulted in a mad dash to qualify for the District 1-3A playoffs, which they accomplished and pushed to the semifinals, losing to perennial power Villa Joseph Marie. New coach Rachel Cecchini will bank on All-Area honorable mentions Erin Flanagan and Cameron Schuler to lead again, but with many new additions, including coach Cecchini, finding cohesion is a priority. “The team lost a lot of seniors last year so we are really looking to come together, learn each other’s habits, and connect,” said Cecchini.

Outlook: Timing conspired against the Falcons in 2020. The team faced a rebuild after the program’s best season ever in 2019 (16-6, District 1-3A semifinals) and had to do it playing in the pandemic-altered 7-team PAC last year that was filled with the league’s top programs. Pottsgrove managed only one win, but many more can be counted on this fall (it’s already 2-1 as of Sept. 13) with the return of the PAC’s two-division format. Senior multi-year starters Emily Vishio and Avery Makoid have the midfield in good shape but a fair few newcomers will need to step up. “We have young, inexperienced players that will have to contribute early and often for us to find success,” coach Steve Mellor said. The Falcons lead the chase pack on Upper Perkiomen for the Frontier Division and should challenge for a return to the district playoffs.

Outlook: A common theme for programs outside the top tier is worries over where the goals will come from. The Trojans don’t have that issue with senior forward Calista Daye, who is five goals from the school’s record. Daye and classmates Kaleigh Martin and Yasmin Paez are the core pieces of a Pottstown team that will also rely on a number of rookies. “We’re looking forward to a full schedule this year,” said coach Manny Paez. “A general improvement of our record is our goal this year.”

Outlook: Many pieces fell into place for Spring-Ford in 2020 in coach Tim Raub’s first season at the helm. A strong senior class featuring All-Area first team midfielders Hope Flanegin (Lehigh) and Molly Thomas (East Carolina) and second team goalkeeper Riley Wallace was bolstered by new additions like Mercury All-Area Player of the Year Liv Curry that helped Spring-Ford to a share of the PAC title and a run to the District 1-4A championship, which doubled as a PIAA semifinal in the COVID-19 pandemic-altered 2020 postseason. The follow-up won’t be so simple though. The aforementioned trio has graduated and the Rams have been hit with varied other departures via transfer (All-Area second team defender Mo O’Donnell moved to Perk Valley) and injury (All-Area first team forward Ally McVey). Spring-Ford has one of the deepest talent pools in the region, which will have to be tapped into to remain a PAC frontrunner this fall in support of their four returning starters Curry, Reese Kershner, Raven Wellington and Claire Lanzisera. Don’t expect a major dropoff from the Rams, but a lot will have to come together to match last year’s success.

Outlook: It looks to be a growing year for the Vikings with only one impact senior in Whitney Steiner and the introduction of new coach Paige Jones, who takes over for Jeff Kushner. “We have a lot of young potential on the team this year as well as a lot of upperclassmen leaders,” Jones said. “With that being said, our team chemistry is incredible, but we are looking to build that more on the field.” Finishing scoring opportunities is a big uncertainty for the Vikings. In Jones’ first year the goal is to get UM trending in the right direction and consistently competitive in the PAC.

Outlook: Everywhere you look there are teams in transition, filled with uncertainty … except Upper Perk. The Indians return eight starters and 10 players with significant varsity experience from a team that performed well in the pandemic-altered 7-team PAC and qualified for districts. There are many bright spots, led by senior goalkeeper Gabby Neal and 2020 All-Area honorable mentions defender Lauren Powers and forward Sarah Fisher. One disappointment is the absence of All-Area first team midfielder Kyra Lesko suffering an ACL injury in the spring. That injury forced UP to “revamp the formation and put some players in different positions than they normally play,” according to coach Mike Freed. The Tribe are the deepest team in the PAC Frontier and are the favorites in the division. They’ve set realistic goals of winning the Frontier, and qualifying for the PAC and District 1-3A postseasons. “If the team plays to its ability, all three are very attainable goals,” said Freed.

Outlook: It’s been a difficult spell for Hill after having its 2020 season cancelled and now entering a season with a third head coach in three years. The good news is that Elena Dauphinais has been there the entire time, elevating from assistant to head coach after the departure of Tim Leyland. With such limited play since 2019 the Blues are starting anew. “We have a lot of players who feel confident in the midfield, so knowing that we can try a lot of different combinations of personalities there is exciting for us to consider as we look to establish our best lineup,” Dauphinais said. Wins may come in short supply for Hill this fall against the best in the Inter-Ac and MAPL but Dauphinais is looking to build for the long haul. “We are a young team, so establishing a team culture that is poised for long-term success is our focus first and foremost,” she said.

Outlook: Like most teams that saw the 2020 season cancelled, just getting to play games this fall is a mark of victory. “I’m excited to have a season again this year,” said coach Justine Segear. “Last year was tough not having any games so we are just excited to be able to play again. I am looking forward to welcoming the new students and building our team chemistry.” Forward Cece Vassallo and defender Cheyenne McCloud have been impact players since they were freshmen and will be looked upon the lead the way. Perkiomen will be competing in the Penn-Jersey Blue Division where Barrack and New Foundations are expected to be their top competition.