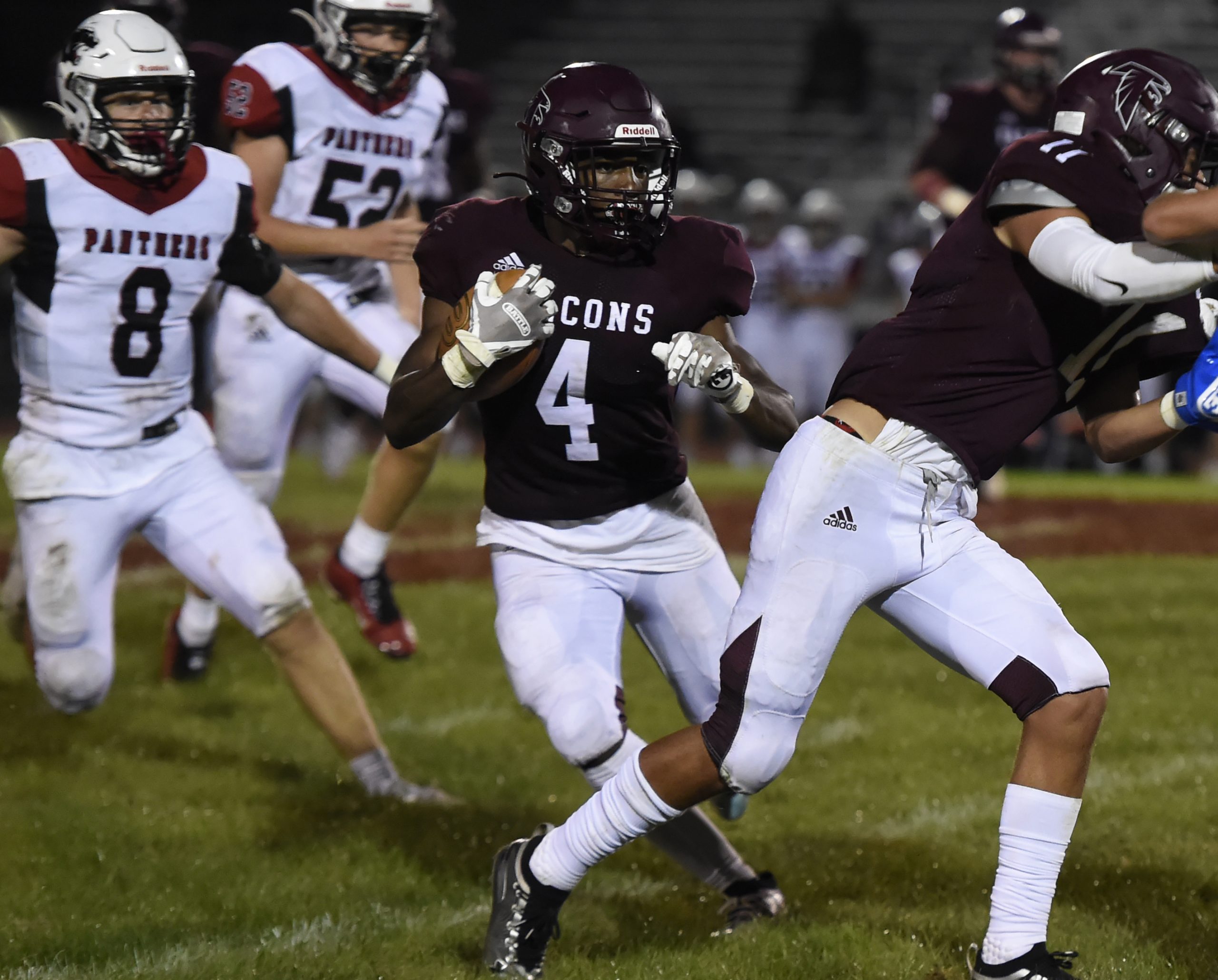 Pottsgrove’s Amir Burnson (4) waits behind a block from Tyler Kaufman (11) during a game against Schuylkill Valley on Friday. (Owen McCue - MediaNews Group)

POTTSGROVE >> Pottsgrove junior running back Amir Brunson appeared ready to take the ball to the house nearly every time he got it Friday night against Schuylkill Valley.

While Brunson officially touched the ball only nine times in the Falcons’ 35-0 victory, he made sure each of them counted.

Brunson took three of his first six touches for touchdowns — two rushing and one kick return. He finished with 128 yards rushing and two touchdowns on eight carries to help lead the Falcons to their second decisive victory to start the 2021 season.

“It was just getting good touches, the line was helping out and there were just good runs,” Brunson said.

Brunson’s two second-quarter touchdown runs — the first from 64 yards out and second from 13 — gave the Falcons a 14-0 lead at halftime. He took the opening kickoff of the second half 86 yards for a touchdown to put the Falcons up 21-0.

It was a play Brunson said, “set the tone,” for the rest of the game.

“(Brunson) creates holes, the defense focuses on him and it opens everything else up,” Sisko said. “Like he said, the line was playing good, it opens the whole thing up.”

Sisko fumbled the exchange from his center on the Falcons’ first offensive play Friday night. A long touchdown run by Brunson — one of two 60-yard-plus runs called back — was negated by penalty on their next possession, which ended in a punt after a three-and-out.

Pottsgrove scored on five of its next six possessions, not punting again until its final drive of the game with the second stringers in late in the fourth quarter.

“We were talking on the sideline all the starters just trying to forget the last play,” Sisko said. “It was a bad play, but just forget it. At halftime, we made some adjustments and came out and played pretty well.”

Pottsgrove’s defense bottled the Panthers up for 124 yards in the game, compared to 253 for the Falcons. Schuylkill Valley’s longest play came on a 26-yard pass from Drew Campbell to Kyle Spotts in the fourth.

Campbell completed 6-of-17 for 47 yards passing and ran 13 times for 28 yards while subbing between running back and QB with Michael Goad. Spotts led the Panthers with 31 yards receiving and Cooper Hohenadel added another 22 yard on the ground.

Brunson and Falcons senior linebackers Shane Caffrey and Max Neeson were among the Falcons swarming to the ball throughout the contest and laying hits that could be heard throughout the stadium. Even kicker Landon Shivak — who had some football experience before switching to the Falcons’ soccer team — laid a few good licks on kickoff coverage.

“Every time anyone gets a big hit, it just lightens up our whole energy,” Caffrey said. “I know once I get a hit and I hit somebody I’m ready to go and hit somebody the next play even harder. That just lights everyone else’s energy up. It sets the tone.”

Pottsgrove defeated Lansdale Catholic 39-14 last Saturday. In their two official contests, the Falcons have yet to allow a point in the first half. Friday was their first shutout since a 14-0 win over Upper Merion on Oct. 11, 2019.

“It was just talking on defense, good linemen assignments, everything was just going well,” Brunson said.

Brunson ran 10 times for 163 yards and two touchdowns in the win against Lansdale Catholic last week.

Through two games he has 18 carries for 291 yards and four touchdowns on the ground, averaging more than 16 yards per attempt.

“Pottsgrove is always known for having good backs, but Amir, he has something special and I hope he takes it somewhere,” Caffrey said.

The Falcons play a non-league game against Boyertown next week before jumping into Pioneer Athletic Conference Frontier Division play.

Confidence heading into the game against the Bears, who knocked off Pottsgrove 20-9 to conclude last season, is high after making quick work of their first two official opponents.