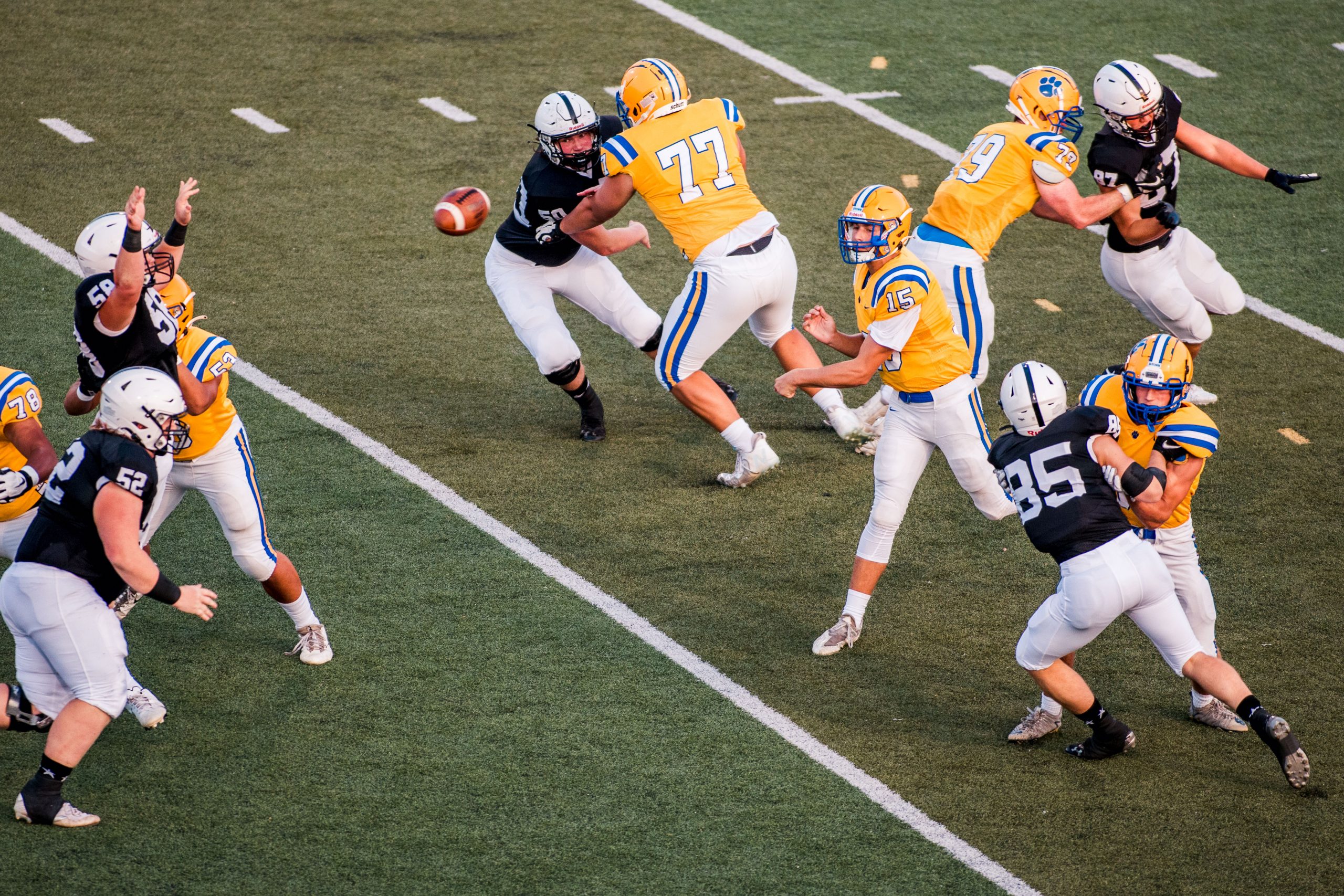 While opponents stack the box with eight defenders, the Cougars have long sought an alternative to the ramrod attack.

If Friday night was any indication, Jamy Jenkins may finally be the quarterback who can open defenses up. The junior southpaw threw for 317 yards and three scores, as Downingtown East won its home opener, 39-14, against Delaware Valley.

Jenkins broke a 47-game streak of Cougars quarterbacks throwing for under 200 yards, dating back to October 1, 2016, when Bryce Lauletta threw for 347, according to Daily Local News’ records.

“All along we’ve struggled against teams that jam us up and we can’t get going,” East coach Mike Matta said. “We’ve spent a lot of time working on catchable, solid routes. The last two games, Jamy has really been a factor.”

The Cougars tallied 468 yards of offense and moved to 3-0 for the fourth time in five years.

“I just went through my reads and my line gave me great protection,” Jenkins said. “I found the open guy and just hit him.”

Downingtown East’s Mike Giardino (8) pumps up the crowd after a touchdown by Louis Rossetti (11). (Nate Heckenberger – For MediaNews Group)

Jenkins’ favorite target his first eight starts, dating back to last season, has been Mike Giardino, who led all receivers with 152 yards on seven catches and one touchdown. Giardino leads the Cougars in receptions (14), receiving yards (231) and receiving TDs (3), this year.

“He’s just a great guy,” Jenkins said of Giardino. “He always gets open and he’s quick and has great hands.”

Following a 20-yard run by Horvath to open the third quarter, Jenkins led Giardino perfectly for a 45-yard score on a play-action pass to deflate any thoughts of a Del Val comeback.

On East’s first drive of the game, Jenkins found CJ Leo for a 21-yard TD. Horvath followed with two of his three trips to the end zone to give the Cougars an 18-7 lead at the break.

“Bo is a dude,” Matta said. “I’m not even sure football is his best sport. He’s a terrific athlete. It’s good to be Bo.”

Downingtown East’s Bo Horvath trucks a defender on his way to a game-high, 163 rushing yards. (Nate Heckenberger – For MediaNews Group)

Louis Rossetti made an impact on both sides of the ball, helping East hold Del Val to 4.1 yards per rushing attempt on the defensive line, and then adding the closing score as he stretched for a 14-yard TD reception. George Bousum had five receptions for 62 yards and added an interception on defense, and Mike Waite recovered a fumble for East.

A couple position groups have impressed Matta through the Cougars’ non-conference sweep of Pennridge (2-1), State College (2-1) and Del Val (0-3).

“We had a really good schedule and our offensive line is young and our secondary is young,” Matta said. “We feel good about our front seven and about our skill kids, but both those positions have answered the call and played pretty well. I’m excited with where we’re at.”

With Coatesville (2-1) losing, Friday, Downingtown East and Bishop Shanahan (3-0) will square off, next Friday, in a battle of the last unbeatens in the Ches-Mon National Division.

“We play four pretty good teams in a row,” Matta said. “We have Bishop Shanahan, (West Chester) Rustin, Unionville and Academy Park next, so the second part of our schedule, they may not be as big as schools, but they’ll be tough to beat. We have to refocus and clean some things up.”

Downingtown East’s defense swarms to a loose ball, but the fumble was recovered by Delaware Valley. (Nate Heckenberger – For MediaNews Group)