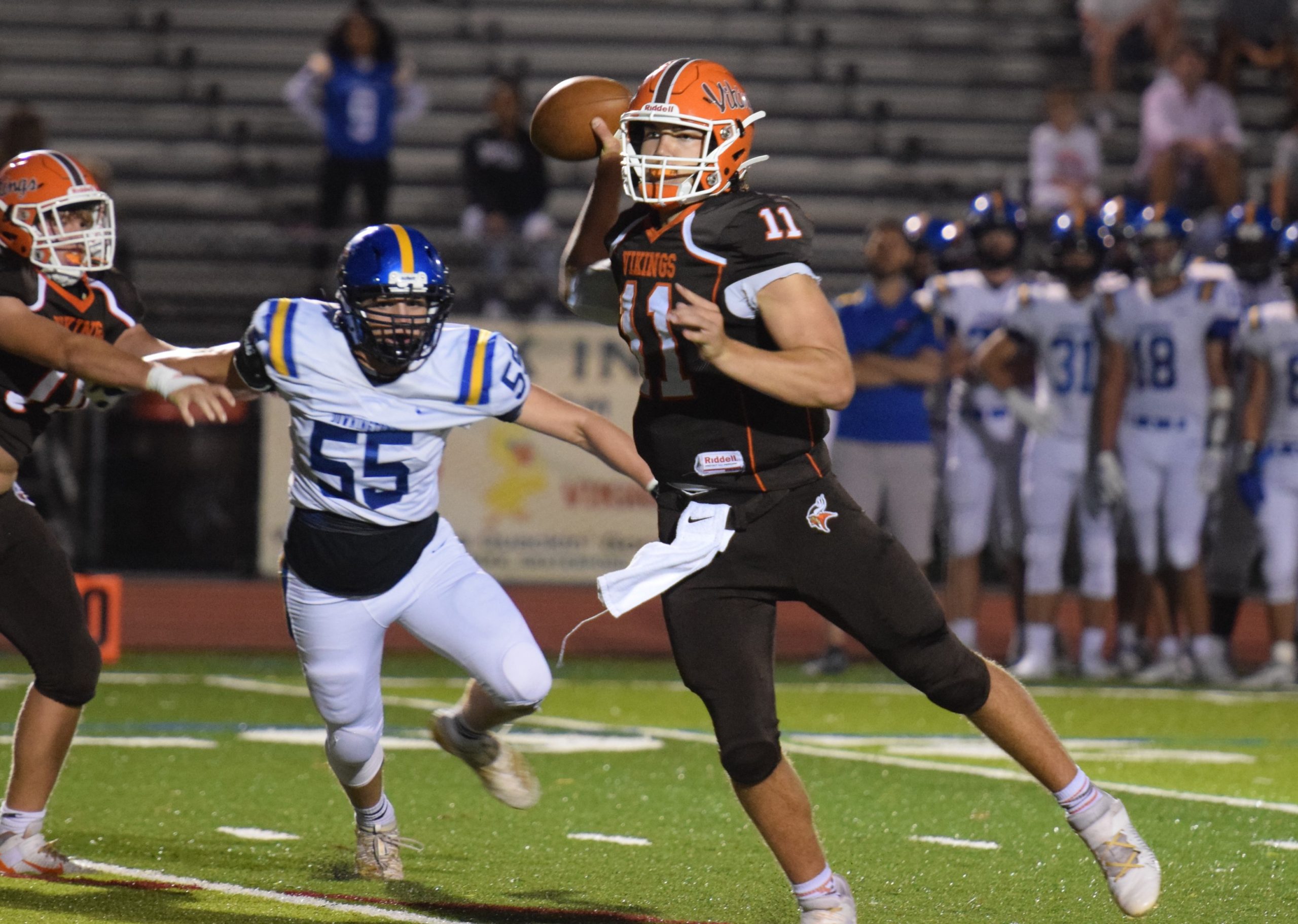 Perkiomen Valley quarterback Ethan Kohler (11) rolls out to pass on a touchdown throw to Michael Poruban in the first half against Downingtown West on Sept. 10. (Austin Hertzog - MediaNews Group)

GRATERFORD >> As a program, the Perkiomen Valley Vikings pride themselves on taking on all comers and testing themselves against the best teams the district – or state – has to offer.

So coach Rob Heist was disappointed when last year’s COVID-related cancellations meant the Vikings lost out on those opportunities.

Disappointment turned to frustration when the Vikings’ uncharacteristically sloppy play hurt them in a loss to Spring-Ford that ultimately decided the league title and cost the squad a District 1 playoff berth.

Heist should have no such concerns this year. Not only are the Vikings back to scheduling and battling the best, they picked up a signature non-league win Friday at Thomas J. Keenan Stadium, toppling Ches-Mont power Downingtown West, 55-20.

“These kids played a complete football game tonight, start to finish, against one of the best teams in southeastern Pennsylvania,” Heist said. “We’ll enjoy it for 24 hours, then it’s back to work.”

There’s no let up from here either. After besting the Central League’s Springfield-Delco in Week 1 and losing a Week 2 heartbreaker to Coatesville, next week Perk Valley (2-1) welcomes District 3 power Manheim Central before taking their shot at revenge against archrivals Spring-Ford on September 24.

It was hard to identify an offensive standout for the Vikings. Senior quarterback Ethan Kohler passed for three scores and ran for another, but had plenty of help from a supporting cast of junior receiver Mike Poruban (two TD grabs), senior fullback Andrew Beck’s tough inside running, and junior receiver Owen Peterlin establishing himself as a red-zone target extraordinaire. Junior Bradley Curci got in on the act late with the evening’s most explosive play, a 60-yard TD run.

Perkiomen Valley’s Ryan Klimek (7) is congratulated after scoring a touchdown in the first quarter against Downingtown West on Sept. 10. (Austin Hertzog – MediaNews Group)

But perhaps it was junior Ryan Klimek who stole the show, continuing to establish himself as one of the area’s most versatile weapons with 93 yards rushing and three scores, four catches for 55 yards, and seven PATs converted. Klimek may not have figured prominently in the Vikings’ plans this time a month ago, but they’re more than happy to lean on him heavily as they embark on the toughest two-game stretch remaining on their schedule.

“Initially, I wasn’t starting – but injuries happen, and I got moved up. I was ready for it,” he said.

Averaging nearly 10 yards a carry and over 15 yards per catch, Klimek has become yet another dependable weapon for Kohler, who continues to impress on a weekly basis. He followed last week’s 285-yard performance against Coatesville with a more modest 188 yards passing Friday but did so on 14-of-17 passing that maximized efficiency. Not only did PV score touchdowns on eight of their nine possessions, they ran only 23 plays in putting five first-half scores.

“I’ve had four years to gain experience, and right now I’m playing with confidence,” said the senior quarterback. “And I’ve got pieces around me that make it easier – that’s the biggest part of it.”

Perkiomen Valley’s Michael Poruban (12) reaches the end zone as Downingtown West’s Carter Grear (47) tries to make the tackle on a touchdown reception in the first half on Sept. 10. (Austin Hertzog – MediaNews Group)

There was no questioning the defensive play of the game. With Perk Valley up 14-0 late in the first quarter, Downingtown West embarked on a 5-plus minute drive that reached the Vikings’ 20-yard line before senior Jeremy Brewer intercepted a Whippets pass at his own two-yard line and carried the ball 95 yards to the DWest 3. Two plays later, Kohler carried for a short score, effectively putting the game out of reach only 10 minutes into the contest.

“It’s bad karma,” Brewer laughed. “I like to be the one hawking down other guys – and this time I got caught at the 3-yard line.

“But what more can I ask than to put my team in a spot like that?”

The Whippets got on the board with a 42-yard Evan Wickersham-to-Jake Kucera connection. The offense had its bright spots, accumulating 390 yards on the evening, but penalties and turnovers were the Whippets’ undoing.

“We work all week to play four quarters on Friday nights,” added Brewer.

West quarterback Evan Wickersham recovered from a rough opening half to finish with 185 yards passing and a score for the Whippets (1-2), who also received second half rushing TDs from Kameryn Alex and John Mulville. Three weeks into the season, Downingtown West has the undesirable distinction of facing perhaps the area’s two most prolific offenses in Garnet Valley and Perkiomen Valley – with Coatesville looming.

“It’s like playing two different sports, against [Garnet Valley and PV],” said Whippets coach Mike Milano. “With [Garnet Valley] you see old-school high school football – double tight ends, split-back veer, midline – then you see a spread team. Both are so good at what they do.”

By halftime on Friday night, Perkiomen Valley led 34-7, a bit more of a margin than the 27-14 lead they took to the break against Coatesville one week ago. There would be no second-half swoon this time in front of a raucous crowd at their home opener.

“I just got done telling these guys I think it’s one of the most complete games I’ve seen from a PV team,” Heist said. “That said, like anyone we have areas for improvement. We cannot be content, with a District 3 powerhouse coming in next week followed by our rivals.”

Maddocks makes all the plays as Fleetwood handles Upper Perkiomen
Jenkins breaks through as QB threat, moving Dtown East to 3-0