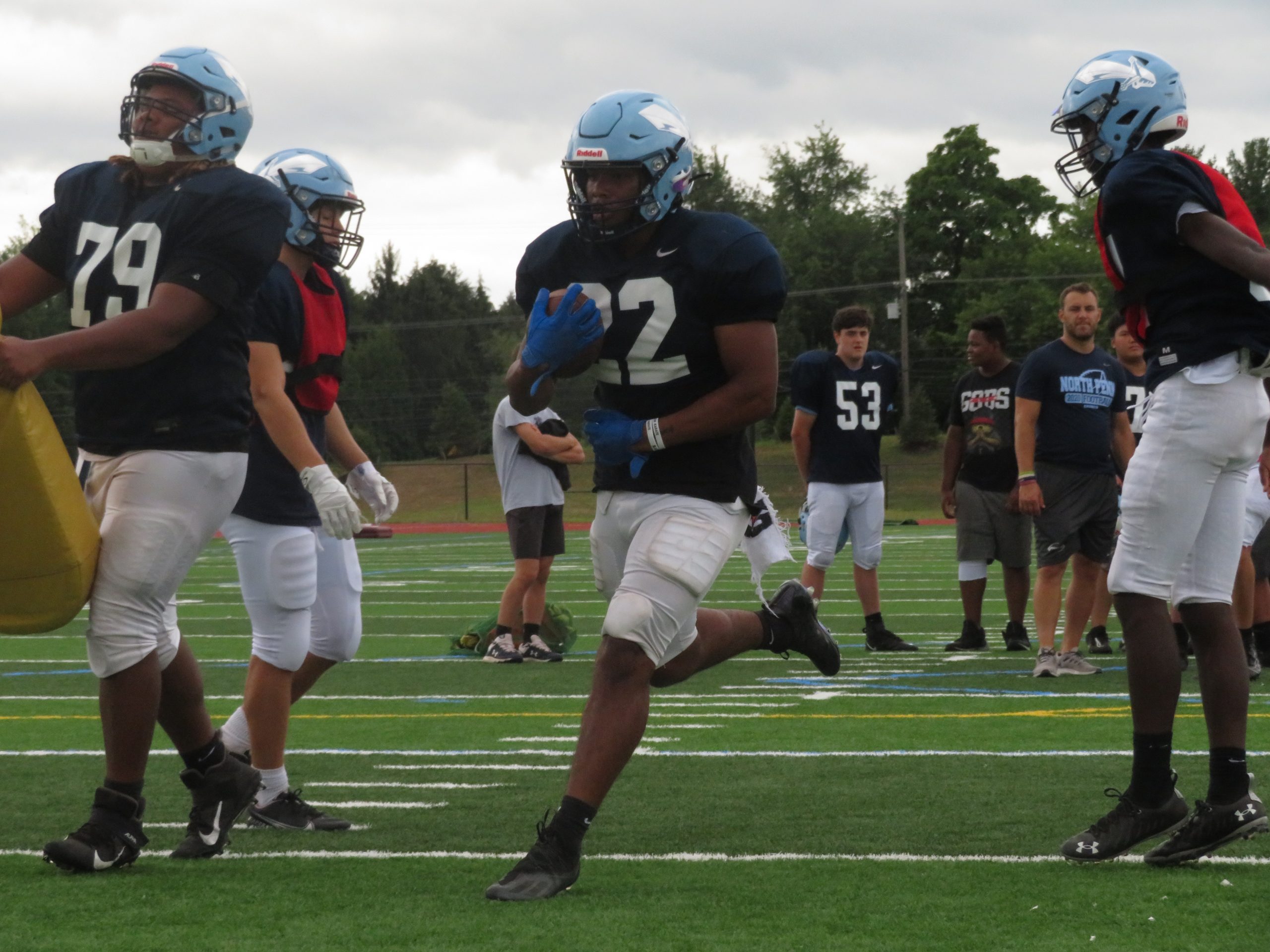 And while the topic has come up this season, it’s not because of the team but rather where it plays – the completion of the school’s Crawford Stadium renovation giving the Knights’ home field a host of new amenities including a turf field and improved bleachers.

“We got a whole new field so we got to represent that field,” said NP junior James Mangine, a safety and fullback. “So we can’t let the fans down, can’t let the school down.”

The digs are new but the goals stay the same for a program that has been one of the best in both Suburban One League and District 1 under head coach Dick Beck. And with several key returners from last year’s explosive offense, lofty expectations seem well in reach for the Knights.

“I would say we’re going to look good coming off the bus,” said Beck, entering his 20th season at North Penn. “All our wide receivers are 6-2, 6-3, the QB’s 6-3, 6-4, the running back’s 220 and we got a couple 300-pounders up front. We’re definitely going to look good walking off the bus. Our thing is all we going to move and be quick and do all that stuff. We got to make sure we’re doing the right thing and being physical.”

A loss to Neshaminy in the opening game of 2020 eventually kept North Penn out of the District 1 playoffs for just the second time under Beck and first time since 2012. The Knights, however, rolled past their next four opponents, outscoring them 191-75 – posting more than 50 points twice – to finish at 4-1.

“I think we have talent-wise, we can do a lot of things. Sometimes when you play that physical, run-blocking game that can be a grind on your running back and your fullback and your o-line so I think we got to be able to pick our spots but I think we can be versatile offensively. We got some gamebreakers, you know guys that can take it a long way on one play. So our biggest concern is catching the ball.”

Eaton has sensational junior campaign, eclipsing 200 yards rushing three times – including a 272-yard, four-touchdown performance against Central Bucks West – as he ran for 1,038 yards and 13 touchdowns on 88 carries.

“At this point he’s bigger than he was last year, maybe a little faster than he was last year,” said Beck of Easton. “I’d like to see him catch the ball out of the backfield a little bit more. But I want Khalani – it’s the old dance with the girl you brought to the prom. I want Khalani to be Khalani, so he is a north and south runner and he can’t every time he touches the ball look to cut it back or bounce so he can take it 80 yards. He’s got to be patient and get downhill and get his four, five, six yard carries because that’ll set up the big play.”

“I want him to make the progression to be more commanding of the offense,” said Beck of Zeltt. “I want him to take ownership of it. I want to be able to I don’t want to say call his own plays but make sure all the guys are in the right positions without me having to tell him to do that. I think his been able to pre-snap read is going to be important also.”

Offensive line will have four new starters – bring back only senior Darren Miller, a first-team All-SOL National Conference selection. Miller will be joined up front by seniors Namir Rose and Avery Downing and juniors Kevin Pownall and Mikai Green. Senior Tyler Beam and junior Bobby Hill – who both missed last season with injuries – are slated to play at tight end.

Defense is looking to improve on the 22.0 points per game it allowed last season. Beck is concerned about depth on that side of the ball but views secondary as the unit’s strength.

“We’re going to be tough to pass on,” Beck said. “My concern is what’s our pass rush going to look like? But I think those guys will be in good position and I think they all can tackle but we can be flexible in our coverages because those guys can really make us right in a lot of different coverages.

Jalen Edwards – an all-conference second-team pick at defensive back– is a three-year starter with the secondary also returning starters Mangine and sophomore Marc Cobbs while Beck also liked the work senior Ronnie Major has done in training camp.

North Penn opens 2021 at the rebuilt Crawford Stadium as the Knights hosts defending District 1-6A champ Souderton. The Knights and Indians had played each other in 13th consecutive seasons before not meeting last year.

“To bring a big crowd in here and show off the stadium while playing a team that’s so close to us even though it’s not a league game it’s a good crossover for us,” Beck said. “You know, I give Coach (Ed) Gallagher and Souderton credit for stepping up and saying ‘Yeah, we’ll play you on the first game.’ They had an opening so we took advantage of it.”

North Penn starts SOL National play at home against Abington Sep. 3. After hitting the road to face Pennsbury Sept. 10, the Knights return home for three straight intriguing contests. They take on defending District 1-5A champ Upper Dublin Sept. 17, renew their rivalry with Pennridge, which made the 2020 District 1-6A final, Sept. 24 then look to avenge last year’s loss to Neshaminy Oct. 1.