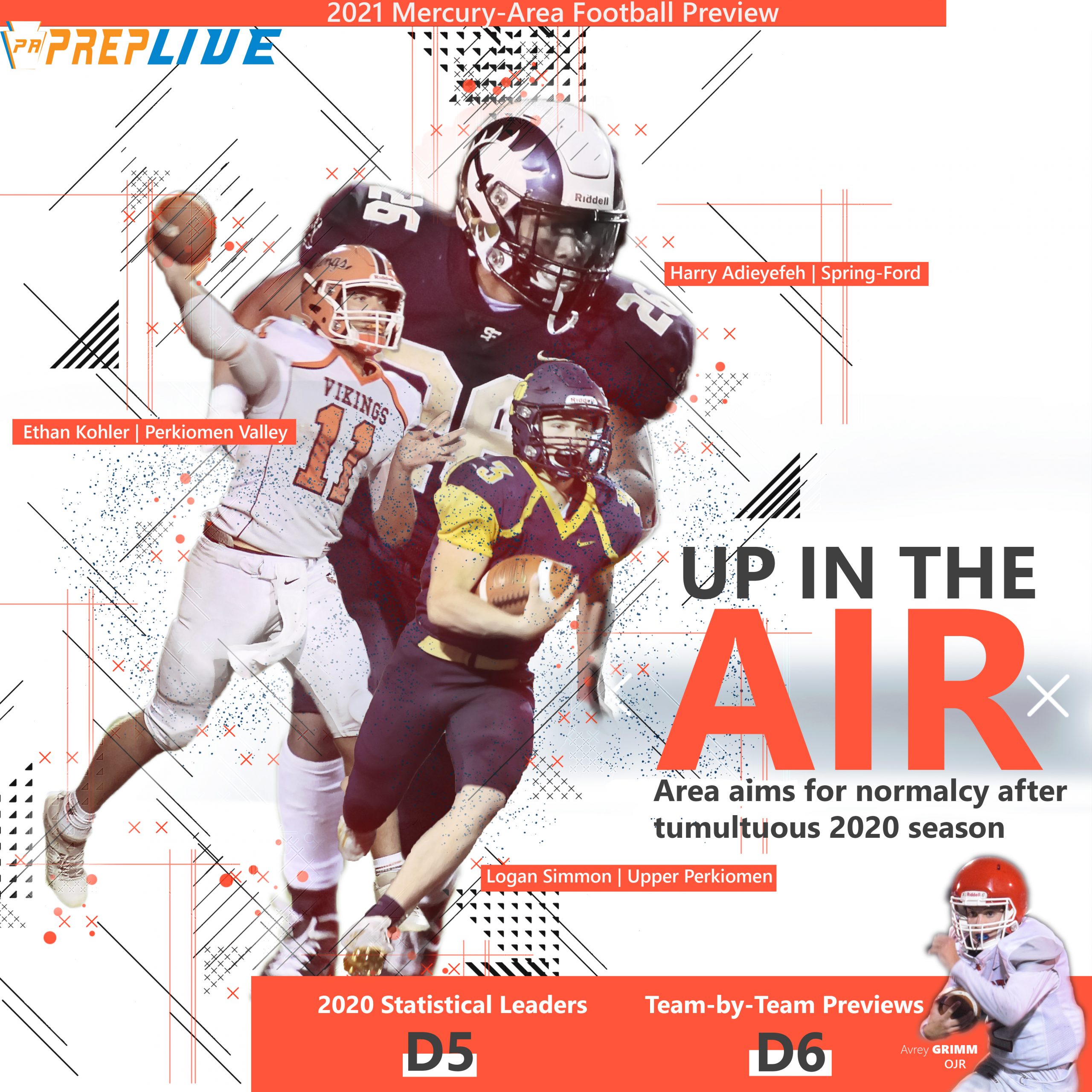 Every new season constitutes a fresh start, but 2021 in the Pioneer Athletic Conference’s Frontier Division brings the cleanest of slates.

Everyone looks to return to a sense of normalcy after a 2020 campaign that saw each school’s scheduling, practices, and overall experience compromised repeatedly by the COVID-19 pandemic. Seasons were cancelled, resumed, then further delayed and postponed — and that’s not a cumulative effect.

With the possible exception of Upper Perkiomen, who was the lone smaller school to play in the official PAC season in 2020, every Frontier school’s 2020 season became an exercise in just trying to make it to the field each Friday night.

For the PAC Frontier schools, just playing a division schedule after last year’s forced hiatus is exciting … but filled with unknowns.

Two full classes of players have graduated since we’ve seen these schools and teams at full strength, and coaches themselves are still looking to figure out what they have and where.

“It’s especially different for us,” said Upper Perk coach Tom Hontz. “Aside from Boyertown and Phoenixville, we won’t see any of [last year’s opponents] unless it’s in the crossover game.

“We don’t really know what everyone has coming in this year — it’s all up in the air.”

The easiest place to start is at Pope John Paul II, where coach Rory Graver and the Golden Panthers made the most of an abbreviated (three games) season in 2020, finishing without a blemish and highlighting their brief campaign with a road victory at Perkiomen Valley. For a school that lost its chance to defend 2019’s District 1/12 Class 3A title, the win over the Vikings represented a signature achievement.

Gone are several key contributors from that victory, including QB Rocco DiRico, WR/CB Justin Kormos, and two-way standout Ambrose Colliluori, but the Golden Panthers have plenty of experience on both sides, led by Josh Little and Steele DePetrillo, both key contributors to the 2019 district title.

Pottsgrove experienced numerous off-field setbacks last year en route to an abbreviated 2-2 finish, but the Falcons return a host of starters on both sides of the ball led by FB/LB Max Neeson and two-way lineman Alex Degler. Another returning starter, QB Ryan Sisko, looks to lead the way in re-establishing the physical Falcons as one of the area’s powerhouses.

Upper Perkiomen acquitted themselves nicely during their season-long tour through the big-school Liberty Division a year ago. They return to familiar terrain this year, but without the services of graduated three-year starter Hunter Flack at QB. Tommy Flud takes control of an offense that features one of the league’s top rushers in Logan Simmon, while Josh Hill, Damon Faraco, and tight end Brady Thompson bring experience on the offensive line.

It’s a pair of fresh starts in Upper Merion and Phoenixville, where new coaches take the reins in 2021. Anthony Ciarlello impressed in an interim role during the abbreviated 2020 campaign and enjoys a bevy of returning offensive starters in his now-permanent position. Workhorse Owen Koch and dynamic playmakers Ahmid Spivey and Tre Davis will enjoy working with an offensive line that returns four experienced starters.

Meanwhile in King of Prussia, Davis Chubb takes over for Victor Brown, and inherits an energized program looking to make up for the disappointing start to last season (Upper Merion started 0-3 before winning their last two contests.) An offensive-minded coach, Chubb hopes to incorporate more passing into the attack on the arm of returning starting QB Nolan Clayton, with Brad Zielinski and Qwynne Seals figuring to serve as top targets.

A young team and the circumstances around the 2020 season led to a 0-4 campaign at Pottstown last year, a disappointment for coach Jeff Delaney after a strong first season in 2019. The Trojans lost All-Area performers in Jahzeel Watson and Sincere Strimpel to graduation, but just about everyone else is back — and considerably stronger, they say, after a renewed commitment to the weight room this summer.

Back-to-back league titles constitute an impressive accomplishment, but it’s not much of a focus for the Spring-Ford Rams as they embark on the 2021 season.

“When we’re at practice, we don’t spend time talking about defending a championship,” said coach Chad Brubaker. “We’re focused on ourselves and getting better – I haven’t used the phrase ‘defending our championships’ once.”

It’s good news/bad news for the Rams’ outstanding defense, which registered three shutouts on the way to their undefeated regular season in 2020, and battling eventual District 1 champion Souderton to the bitter end of a 27-24 season-ending loss in the district semifinals.

The good news? One top performer returns at each level, led by PAC Defensive Player of the Year Ryan Horvath, a linebacker. He’s joined by stalwart tackle Donnie Nicoline and safety Cole Turner, each of whom will be relied upon as lynchpins in an otherwise young defensive unit.

On offense, the Rams return QB Ryan Freed and RB Harry Adieyefeh Jr. (110 carries, 568 yards, 6 total TDs in 2020), who figure to benefit from what Brubaker called some of the more impressive depth along the line he’s seen in his time at Spring-Ford. Kolten Kqira leads a crop of promising targets on the outside.

It won’t take long to find out what the Rams have, as a challenging non-league slate leads up to the PAC opener on September 24 at Perkiomen Valley, where senior QB Ethan Kohler and the Vikings have been patiently awaiting their chance for payback since last year’s 27-14 loss to the Rams. Kohler debuted impressively as a freshman with a win over Spring-Ford back in 2018 and would like to repeat the feat once more before his high school days are over.

“Spring-Ford is the champion – until they’re not,” said PV coach Rob Heist. “They’re the pinnacle right now, and we’re chasing them.

It’s a senior-laden Vikings squad that takes the field in 2021, with Kohler (97-for-154, 1,451 yards, 16 TDs, 1 INT, 175.12 passer rating; 205 yards, 7 TDs rushing) leading a group of 15 starters who return with extensive experience. Senior tackle Jake Jonassen figures to lead the group responsible for giving Kohler time to find a list of targets led by Dawson Debebe and Rasheem Grayson.

Over in Bucktown, Owen J. Roberts returns the PAC’s leading rusher in Avrey Grimm (97 carries, 661 yards, 6 TDs), who figures to serve as a workhorse yet again as the Wildcats lean heavily on two-way standout senior John Havrilak (two-way player of the year in 2020) and WR/LB Aston Shrum. Returning QB Michael Reed will be welcoming a new group of pass-catching targets as the Wildcats lost Dante DeNardo and Christian Grossi to graduation.

After a breakthrough campaign that brought the first winning record since 2014, it’s another new start at Methacton where Brian Kennedy takes over for Dave Lotier. A small group of seniors (nine) will nonetheless be counted upon heavily on both sides of the ball, particularly on a defense where Chris Augustine, Matt Blakemore, and Brian Dickey were All-Area performers. A hot start could have the Warriors in the thick of the race, as they won’t see perennial front-runners Spring-Ford and Perkiomen Valley until the season’s final two weeks.

In Boyertown, guard Kyle Pry is the only returning lineman for an offense that otherwise boasts a a strong array of skill position players, led by three-year starter Leo Egbe at running back. Roman Marinello will likely split carries with Egbe behind junior Anthony Panarello or sophomore Ryder Gehris at QB, while TE/WR Luke Ordway returns as not only the team’s leading receiver, but one of its top tacklers from his defensive end spot. PJ Cunnius, Nathan Deming, and James Thoburn are leading candidates to occupy spots on the line, while sophomores Jason Oakes, Cade Sennott and Cole Yesavage figure prominently in the Bears’ back seven on defense.

Norristown was the one PAC school who saw their 2020 season completely cancelled, but the Eagles did get to play a spring slate, which coach Joe Milligan hopes will create some cohesion as they move directly into the 2021 campaign with only a summer break. Senior Kaden Cruz figures to be a standout on both sides of the ball at running back and middle linebacker, while a QB competition between senior John DiNolfi and junior Robby Miller may not be settled until the opener against Bensalem.