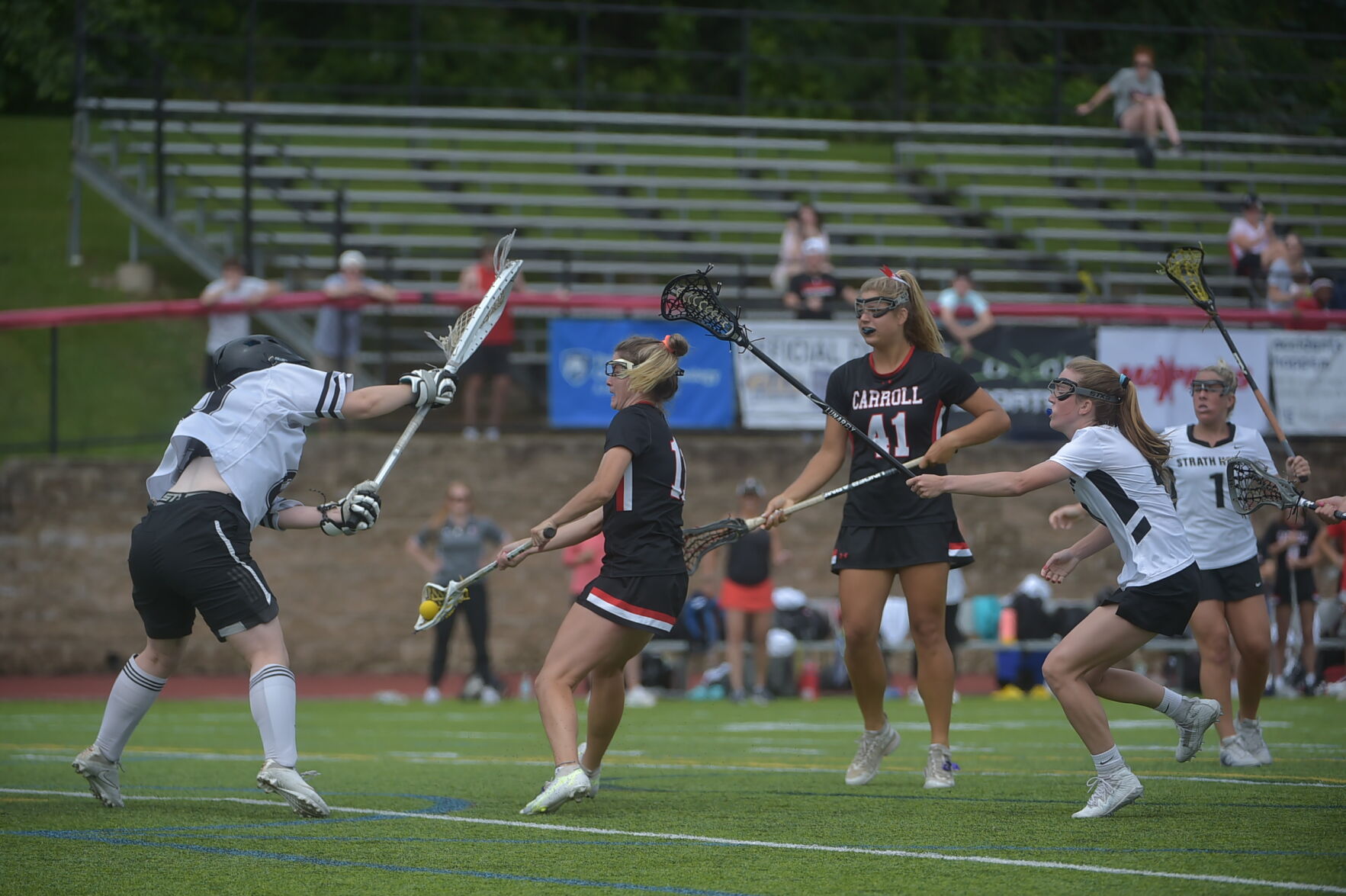 Archbishop Carroll's Keri Barnett, right, slips a shot past Strath Haven goalkeeper Erin Spaulding early in the second half Saturday to put the Patriots up a goal in what became a Class 2A state championship victory over the Panthers. (Pete Bannan/MediaNews Group)

The kid from Glenolden, who spent her first two high school years at Interboro High, had played for Patriots coach Lorraine Beers since she was a little girl in the PHANTASTIX club organization. Before she had played a lacrosse game at Carroll, Barnett was friends with several of her teammates thanks to their connections in the club, so fitting in with her team wasn’t a problem.

Barnett was excited to join a historic high school program, one with 100-plus straight wins in the Catholic League and aspirations of winning a PIAA championship every year. Barnett went on to have a spectacular senior season, which led to her being named Catholic League MVP.

In her final game, Barnett delivered one of her finest performances Saturday morning at West Chester East’s Zimmerman Stadium. She recorded four goals, one assist and five draw controls to help Carroll capture the PIAA Class 2A title with a 14-6 victory over Strath Haven.

“It was obviously a really big transition coming to Carroll and two completely different schools,” Barnett said. “I have to drive 30 minutes to school every day, which I don’t mind. Coming to Carroll, it really helped me become a better person. And to be a part of this team, it’s just really special. We’ve had a lot of practices together to prepare for this moment and we’ve all had each other’s backs and it’s a great feeling that we won.”

The Patriots overcame a strong first-half effort by Strath Haven, and capitalized on six Strath Haven yellow cards, en route to winning their second PIAA title. They last won it all back in 2017.

Haven tallied the first two goals and generally outplayed Carroll in the opening half. Devon Maillet netted three goals and Grace Kelly found the back of the net once to give the Panthers a 4-2 lead at halftime.

“We came out flat. We weren’t playing our game,” Beers said. “We shot 2-for-12, which means we shot a lot of things at their goalie. And she’s a good goalie. But we were making her look amazing. It really took us until halftime.”

Beers gave a spirited halftime speech to her troops, who answered her call. Kiley Mottice scored off the draw less than a minute into the half. Aiding the Patriots in their second-half surge was the officiating. Haven’s Kaitlin Nieczpiel was whistled for a dangerous follow-through, giving the Panthers their fourth yellow card and putting them one player down the rest of the game. Less than a minute later, Machaela Henry deposited the game-tying goal, and Carroll was off and running. Another yellow card, this one on senior standout Danielle McNeely, put the Panthers at a 12-on-10 disadvantage for the remainder of the day.

Frustration set in for the Panthers as the District 12 champion Patriots flourished. Carroll ripped off six straight goals to take an 8-4 lead and outscored Haven, 12-2, in the second half.

“We wanted to finish our shots off and have good, open opportunities, especially when they had two players down,” said Mottice, who finished with two goals and one assist. “Once we got the ball, we knew we had to keep it going, keep it rolling and we knew good things would happen. We all had a lot of trust in each other that we would finish the game strong.”

Keri Barnett sneaks one home. This could get out of hand. 6-4 Carroll pic.twitter.com/7hf7TZ0LWl

Maillet’s fourth goal came with less than 12 minutes to play to cut the Carroll lead to 8-5. But the two-player advantage for Carroll proved too much for the Panthers to overcome.

Despite Carroll’s furious attack after halftime, Strath Haven goalie Erin Spaulding was amazing, registering 11 saves. She denied several clean looks by Carroll in the first half, and did her best to keep the Patriots’ high-powered offense at bay in those long final 20-plus minutes when her team was without its full allotment of players.

Spaulding, who will play lacrosse and major in public health at Shenandoah University in the fall, gave the Panthers all she had. After the game, coach Pigeon Graham embraced her and thanked her for everything she was able to do Saturday to keep the Panthers in the game.

“This is an incredible group of girls. I’d rather lose with this team than win with any other,” Spaulding said. “I just had to forget about the last shot that went in and refocus. That’s the past, I cannot change that, so all I could do was to try harder and to keep my cool and to know that … I trust my girls and my girls trust me. Ultimately, it’s one of those things where I just had to refocus and keep my head in the game.”

Henry, Emma Talago and Julia Basciano each scored twice for the Patriots. Sienna Golden and Nicole Pawelec tallied one apiece. Goalie Sophie Kevtan made one save.

“It feels really rewarding after all of our hard work,” Pawelec said. “This is what we’ve been hoping for the whole season and I’m glad we were able to come out with the win. We’re state champions and that’s a great feeling.”