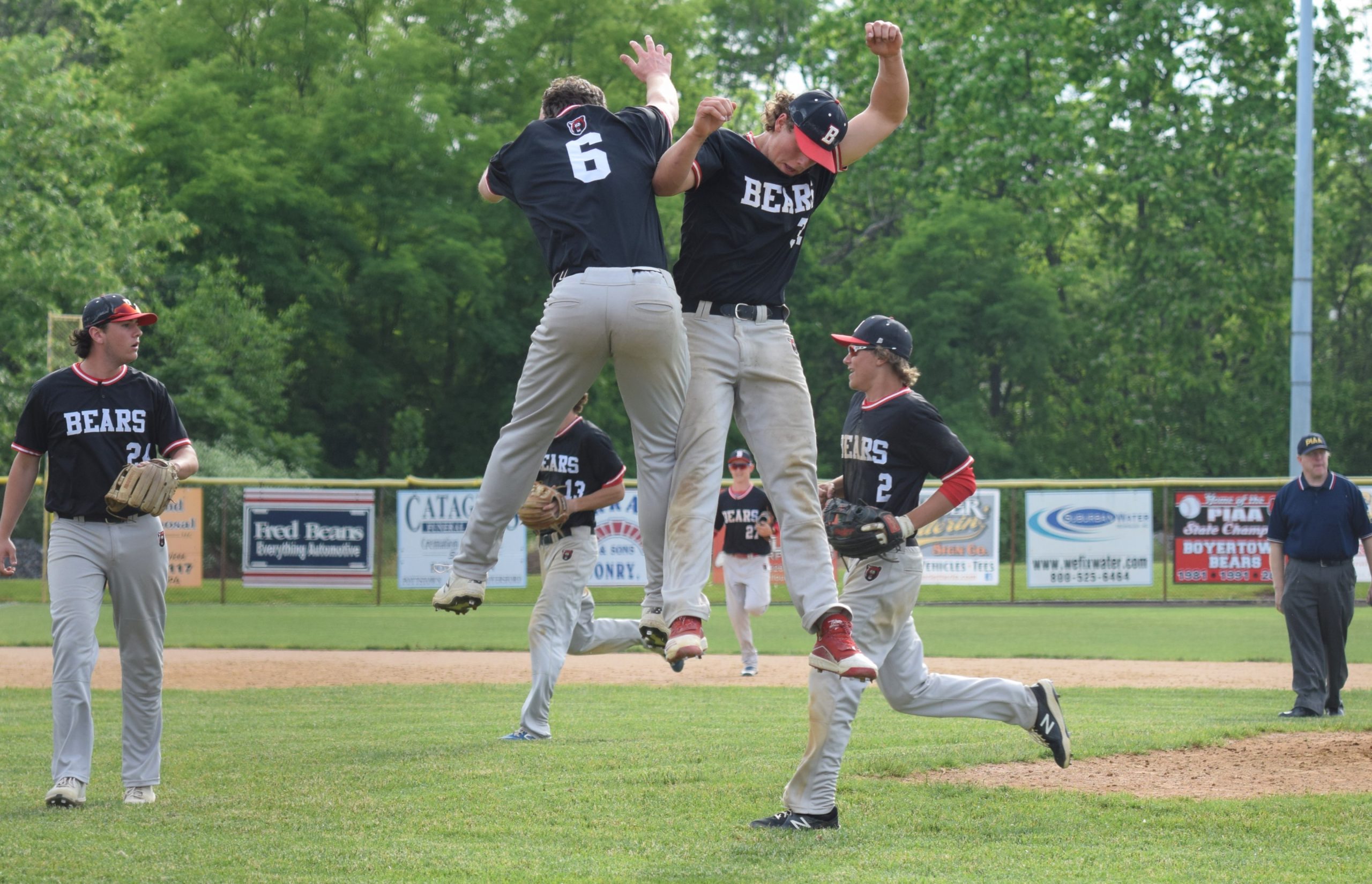 But the Boyertown senior right-hander can’t feel too aggrieved. What he put down the previous 6⅔ innings was a special postseason performance.

Up against his pitch limit, Yesavage, after 6⅔ innings of one-hit, 11 strikeout baseball, made way for classmate Cole Hertzler to finish off North Penn and send the Bears to a 2-1 victory in the District 1 Class 6A semifinals Tuesday at Bear Stadium.

Boyertown’s Trey Yesavage, right, smiles back toward the field after leaving the game after going 6 2/3 innings of one-hit ball against North Penn. (Austin Hertzog – MNG)

Bears are headed to the title game after dynamic pitching performance from Trey Yesavage, 1 hit over 6 2/3, and timely hitting in 5th on RBI doubles from Martin and Shane pic.twitter.com/r7H7Zcxcpt

No. 5 seed Boyertown (17-3) reaches the district final for the first time since 2014 by putting together a textbook performance of great pitching, unwavering defense and timely hitting.

“I’m so excited,” said Yesavage, who improved to 7-1 on the season. “Not only did we pitch well, we rolled the ball well. After the first couple innings, we got some hits together, some runs and that was all I needed.

“I wish I got one more (batter) to finish the game. All-around good performance.”

The Bears’ timely hitting came in the form of a two-run fifth inning after the Knights’ Sam Cohen hit an RBI double to score Justin Egner that was their lone run in the top half of the frame.

Boyertown immediately responded with a leadoff single from right fielder Evan Hetrick. After being sacrificed to second by Luke Moser, shortstop Ethan Martin and first baseman Brandon Shane strung together RBI doubles both down the left-field line to turn the one-run deficit into a 2-1 lead.

Martin, the leadoff hitter, decided to adjust an overly patient approach in the decisive fifth.

“I went up with the intention of swinging. I was having a problem not swinging and I went up swinging,” he said. “I was thinking about it in the dugout before, so I knew.”

Boyertown’s Ethan Martin (13) is congratulated by Cole Hertzler (32) after scoring the lead-taking run of the Bears’ 2-1 win over North Penn. (Austin Hertzog – MNG)

The Bears host No. 11 Neshaminy, a 5-1 winner over Hatboro-Horsham in Tuesday’s other semifinal, in the championship on Thursday at a time to be determined.

“Throughout the entire game I was just focusing on trying to put up zeros, do whatever I could,” Lennon said. “We came up short, but we hope to see them again in states. We’re going to bounce back and beat them next time. We can’t hang our heads here.”

The Knights (14-6) have more to play for this season after clinching a spot in the PIAA 6A tournament after their win over No. 1 seed Spring-Ford in the quarterfinals.
North Penn meets Hatboro-Horsham on Thursday in a PIAA seeding game.

The game had as much atmosphere as any event contested this school year with a sizable crowd and fire from both teams in what proved to be a great game by both teams, thanks largely to their outstanding starting pitchers.

Yesavage was feeling the moment early on.

“I had some butterflies,” he said. “In front of a big crowd, even with a 4 o’clock start, still got the nerves going. I was excited out there.”

The adrenaline aided an explosive fastball he relied on.

“I was able to pound the fastball. They couldn’t really touch it,” Yesavage said. “My curveball was all right, slider all right, so I’ve gotta work on that for next time.”

After the offensive fifth inning, Yesavage struck out two in the sixth then went out for the seventh teetering near the 105-pitch limit. He got Egner to ground out to second and struck out Colin Orndorff for his final at-bat that elicited a big reaction from the Bear Stadium crowd.

Hertzler shifted from third base and needed four pitches to finish the win on a groundout to second baseman Moser.

“It feels amazing,” said Martin. “We needed that win. We really needed it. I’m just glad we could get it done. And we held it, too. We got up by one and held it.”

With a championship game and state tournament on the horizon, Martin sees endless possibilities for the Bears.

“I believe we can do anything, as long as everyone is there and in the game,” he said.