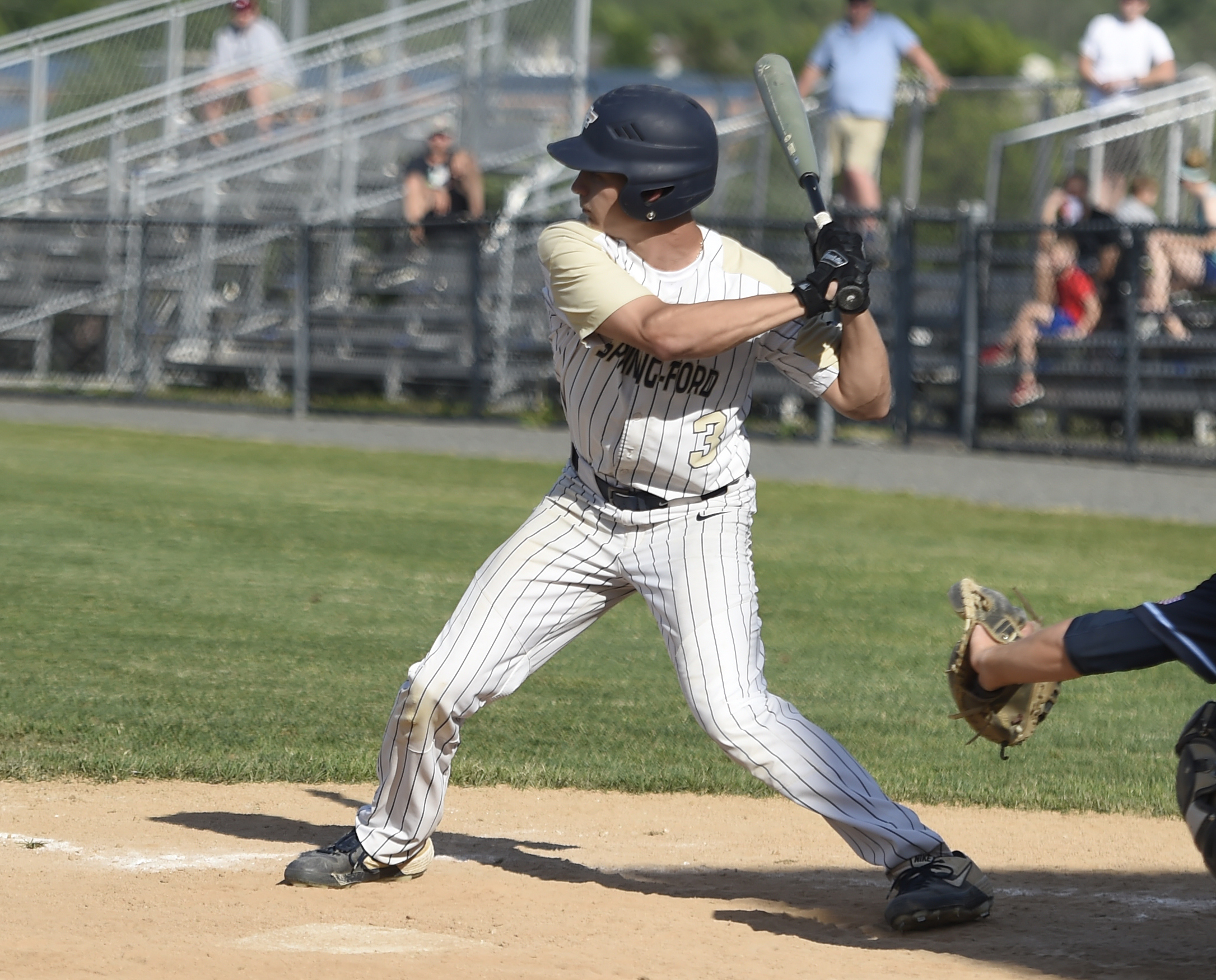 ROYERSFORD >> Spring-Ford was down by four runs in the bottom of the seventh inning and in danger of having its baseball season come to an end Tuesday afternoon against Central Bucks South.

But the Rams chipped away for two runs and then Dylan Ducharme drilled a grand slam over the fence in right for an 11-9 win that kept the Rams’ hopes of a PIAA Tournament berth alive.

The District 1-6A playback win at Ram Stadium sends No. 1 seed Spring-Ford (17-2) into the fifth-place game on Thursday against Garnet Valley, a 4-3 winner over West Chester Henderson, that will decide the district’s final state berth.

“That was insane,” said senior outfielder Ducharme. “I have no words to describe that. That’s about the coolest thing I’ve ever done in my life.”

Griffin Straface, Jarrett Gordon and Jake Books hit consecutive singles to start the inning that produced a run. Then Aydan McNelly walked to fill the bases and Jack Kisela singled to make it 9-7.

“I was trying to hit the ball over the second baseman’s head,” said Ducharme. “I was down early 0-2. I was just trying to do my job. I felt like I was seeing the fastball out of his hand.”

Spring-Ford came back with five in the bottom of the inning on an RBI grounder by Billy Bean, a two-run double by Straface, a run-scoring single by Gordon and a double by Books.

But CB South tied it in the fifth and then took a 9-5 advantage in the sixth on a double by Colin Mitchell, a single by Boyce and a two-run single by J.T. Anderosky.

“We know with the offense, we just have to stay in the game,” said Ram coach Rick Harrison. “Just have to stay in it mentally. We’ve had a few guys struggle, but we’ve scored a lot of runs. We just needed four base runners and some guys got on. We have some guys 1-to-9 who can hit.”

“Once their first pitcher came out, even though we were down, we had a lot of confidence,” said Ducharme. “Our team knows, no matter who the pitcher was, we can score some runs.”

Gordon and Books each had three hits and Straface and Ducharme two apiece and the Rams totaled 12. Jimmy Kelly and Boyce each collected three of the Titans’ 10 hits.

Kisela started on the mound for the Rams and Luke Czachor earned the win in relief. Robby Porco threw five innings for CB South.

“I thought we competed really well in the beginning against a Division I pitcher,” said Harrison. “We had a few guys down and a few guys had to step up.”

The Titans went 2-2 in the playoffs.

“They’re the No. 1 seed in the tournament for a reason,” said South coach Kevin Bray. “We battled the entire year. We’re not your typical No. 19 seed. We play in a very tough conference and a tough division. We’re proud of that. We’re battle tested. We’ve got to play seven innings. They played a little more more in seven innings than we did. To get two wins out of this, our young guys got a lot of experience.”

The Rams will have only a short time to enjoy the win with another do-or-die contest coming up at home Thursday.

“Big game. Same mentality,” said Ducharme. “This game doesn’t mean anything if we lose on Thursday.”

“We’ve got to ride this tonight and regroup,” Harrison added. “The goal is to keep fighting and play another game.”

Trey Bien: Yesavage hurls Boyertown into District 1-6A championship with 2-1 win over North Penn
District 1-6A Softball: Spring-Ford advances to title game with 2-0 win over Quakertown