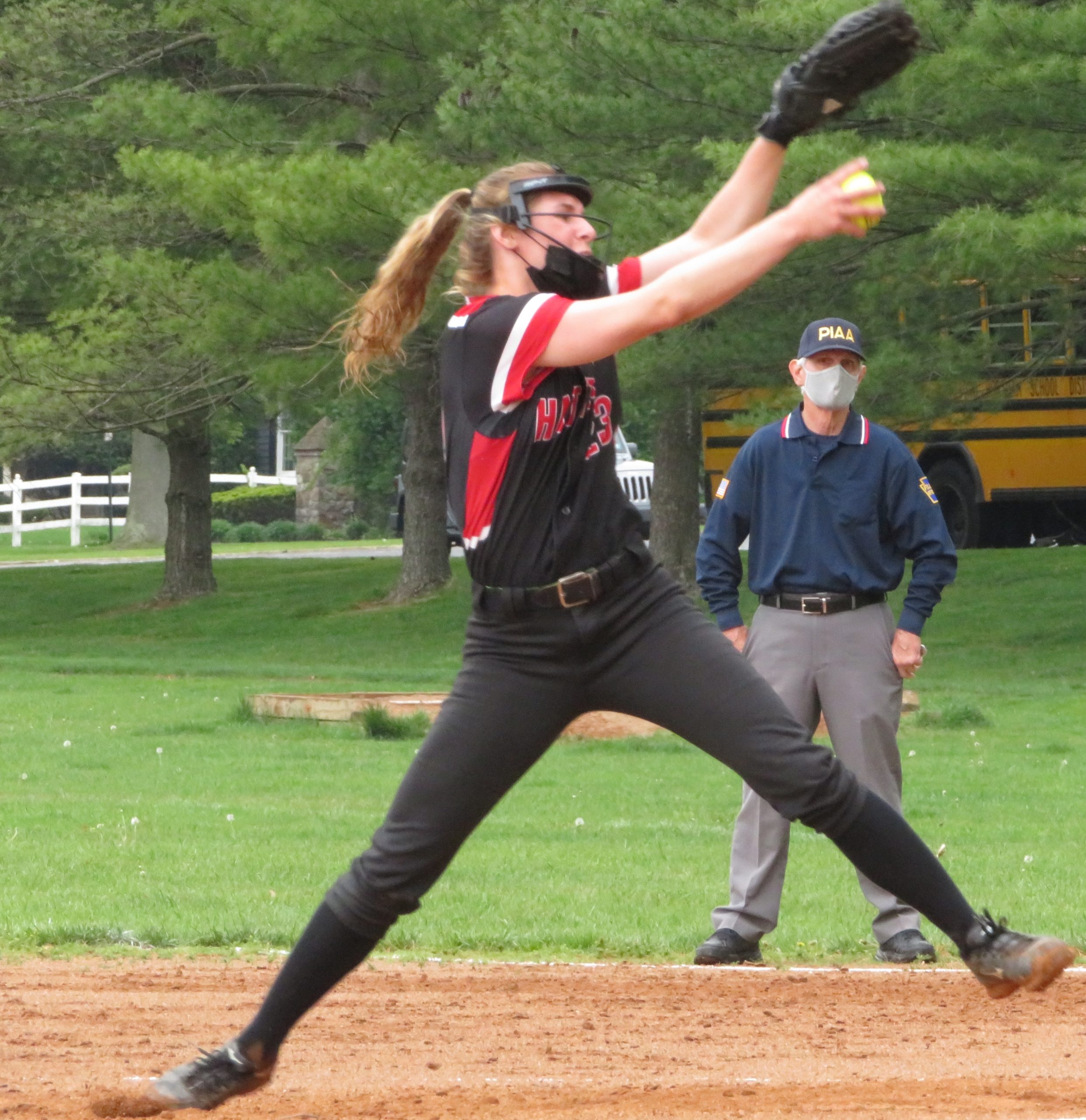 Hatboro-Horsham's Kendal Leitner struck out 16 batters in a 5-1 win over Wissahickon on Monday, May 3, 2021. (Ed Morlock/MediaNews Group)

LOWER GWYNEDD >> Hatboro-Horsham pitcher Kendal Leitner didn’t feel like she had her best stuff prior to Monday’s game against Wissahickon.

It wasn’t the pregame rain — she loves pitching in the rain. Whatever the problem was, it didn’t show up inside the circle.

Leitner threw a complete game, striking out 16 batters to no walks and scattering three hits in a 5-1 Suburban One League Liberty Division win at Wissahickon High School.

“I play every game like it’s an intense game,” she said. “My dad told me – you have to play like you’re an underdog. You can’t go in thinking it’s going to be an easy game because any team can come and beat you on any given day. You never know what’s going to happen.”

The junior right-hander started the game on fire. She struck out the first five batters before allowing a hit. She fanned the next three Trojans she faced and retired the next seven to get through four innings while allowing just one baserunner.

“It’s really nice to have someone who is so dependable and is such a great worker and a great teammate,” HH coach Kelly Krier said.

“She started today off really strong — just pitching really great pitches, keeping their hitters off-balance. They have some really great hitters, but she was able to keep them off-balance.”

The only run she allowed came in the bottom of the fifth inning. Wissahickon’s Grace Franczyk singled off Leitner’s leg, stole second and – after two strikeouts — scored on an Emma Dutill single. Dutill advanced to second on the throw home and moved to third on a wild pitch, but Leitner struck out the next batter to end the threat.

“I haven’t seen Mady Volpe pitch from North Penn,” Wiss coach Mike Borkowski said, “but (Leitner) is probably the best pitcher we’ll see all year. I don’t know what Mady looks like, but (Leitner) can throw. She has all of her pitches – beautiful rise ball, she got us on that a few times. She’s excellent.”

Leitner also contributed to the win with her bat. She went 1-for-4 with a home run and two runs scored.

In the second inning, she reached on an error, advanced to third on Abby Waeltz’s double and scored on a Marissa Rapino grounder.

In the fourth, Leitner hit a solo home run over the right field fence.

“I never hit it opposite field,” she said. “It was kind of shocking for me. Normally I’m a pull hitter – everything to the left side. It was shocking. It felt really good because I’ve been working really hard with my hitting. I want to be a good hitter because there’s a stereotype that pitchers can’t hit. I want to be able to prove that I can hit.”

The Hatters (11-0, 5-0 SOL Liberty) added another run in the fifth when Morgan Mills tripled and scored on a Kristen Myers single to extend their lead to 3-1.

Amya Lundy hit a two-run single in the top of the seventh to make it 5-1.

Danielle Ciliberta took the loss for the Trojans (8-5, 3-2 SOL Liberty). She threw all seven innings, allowing five runs on eight hits. She struck out three batters to no walks.

“Danielle has been great all year,” Borkowski said. “She didn’t walk anybody. They earned their runs. We knew they were going to hit – we knew that. Our goal was to try and hit with them, but against Kendal that’s something to do. We were trying to keep it to three runs or less to give ourselves a chance, which we almost did. (Leitner’s) a heck of a pitcher. Danielle had a real good game – she had their hitters off-balance.”

The SOL Liberty rivals will play again Thursday at Hatboro-Horsham.

Shipley’s Abbie DeSantis is Main Line Girls Athlete of the Week
ROUNDUP: Another day, another shutout for Interboro’s Kerwood